Why older Latinos matter in election

By Jeff Cruz, Special to CNN

Editor's note: Jeff Cruz is the executive director of Latinos for a Secure Retirement, a coalition that seeks to educate and mobilize the Latino community about retirement issues. He was the deputy director for senior outreach in the Chicago headquarters of the 2008 Obama presidential campaign.

(CNN) -- There is no doubt that Latinos are a growing political force in America. One out of every six Americans is Latino. Latinos are turning places such as North Carolina into new battleground states while remaining critical in Florida, Nevada and New Mexico.

The importance of the Latino vote is not lost on the presidential candidates. The Obama campaign is making an unprecedented outreach to Latinos, spending an estimated $1 million on Spanish-language advertising to date.

Much of this advertising and outreach has focused on reaching younger Latinos since Latinos are a very young population -- more than a third are under 18.

However, Latino senior citizens should not be ignored in this election.

First, seniors can deliver more than just their own vote. In Latino culture, grandparents play influential roles in families. Successful mobilization efforts will try to engage Latino seniors as leaders of their families and networks.

Traditional senior issues such as Social Security and Medicare are especially important to Latino seniors, who tend to live long and are more reliant on Social Security's modest, but vital, benefits.

Polling shows that Latinos, like the majority of Americans, place a high value on Social Security and oppose benefit cuts. In truth, Social Security is important for Latinos of all ages. It is America's largest children's anti-poverty program. Latinos, who tend to have more children and work in blue-collar jobs, are more likely to survive on benefits as children of deceased or disabled parents. To Latinos, Social Security represents an important promise that if you work hard and play by the rules, you will have a foundation for you and your children if you lose wages because of old age, disability or premature death.

Mitt Romney's endorsement of Rep. Paul Ryan's budget should raise huge red flags for Latino seniors. His proposal would decimate funding for Medicaid, privatize Medicare and raise its eligibility age. Forcing 65- and 66-year-olds into the more expensive private market could potentially drive up costs for both the young and the old. In total, this change could cost Latinos more than $2.4 billion a year.

In contrast to Romney, President Barack Obama seems to understand the value of Social Security and Medicare to Latino families. But the challenge of governing and being open to compromise has led some to question his commitment. If he campaigns and governs as a strong defender of these programs, he will win over Latino seniors and, along with their support, Latinos of all ages. He will have a good chance at a second term.

With leading Latino advocacy organizations having recently launched the Latinos for Democracy campaign, which aims to register and turn out 200,000 new Latino voters, Obama is wise to focus his effort on courting this constituency. Latinos are likely to surpass the 10 million votes cast in the 2008 presidential election.

Despite their growing numbers, Latinos are drastically underrepresented in our political system. For example, although Latinos comprise 16% of the population, they hold 2% of Senate seats and less than 7% of congressional seats. Of top congressional staff identified by the National Journal, less than 1% is Latino.

This lack of political participation so evident in the power corridors of Washington is directly tied to failure of Latinos to mobilize their communities fully at the ballot box. In 2008, less than half of eligible Latino voters cast ballots, compared with two-thirds of white voters.

If Latinos want to strengthen their political clout, they will first have to overcome some obstacles. The continued failure to pass comprehensive immigration reform has left millions in legal limbo and unable to vote. The recession has hit Latinos very hard, with unemployment and the foreclosure crisis causing hardships that complicate voting efforts. On top of that, Republicans are rewriting state laws to make it more difficult for Latinos to vote and for organizations to register voters. These voter-suppression tactics threaten all of our democratic values.

Until these challenges can be overcome, for now Latinos will have to unite and show their clout by going to the polls in November.

What they are leaving out in this article is the fact that most older Latinos in America that are not recent immigrants, know the deal, and are not likely to be conned by republican false political rhetoric.  Older Latinos in America know that the republican party is made up of primarily anti-minority anything, and that they are just as racist against Latinos/Hispanics/Mexicans as they are against Black people, and that their only objective in "reaching out" to Latinos is so that they can use the Latino vote to win elections, of which, once in office, have no intentions of doing anything for Latinos the same as they have no intentions of doing anything for Blacks.

All this is often lost on many younger Latinos and recent Latino immigrants.

What is a Latino and an Hispanic?  The Hatfield & McCoys of Europe have more names for human beings than they do their damn dogs.  Syrians, Jews, Native Americans, etc., etc.  All we are are our parents children.  Don't you have a belly button?  Whoops, there it is!!!!!!!

I thought this was kinda interesting!! It shows how we're getting (politically) smoked by the numbers as the now-#2 racial "minority" in America.  Also the "racial and ethnic breakdown by state" link at the bottom gives a great accounting of the states where we DO have even slight political clout (mostly Southern states, of course!) ... and where we have little-to-none.

By the numbers: Latino voters 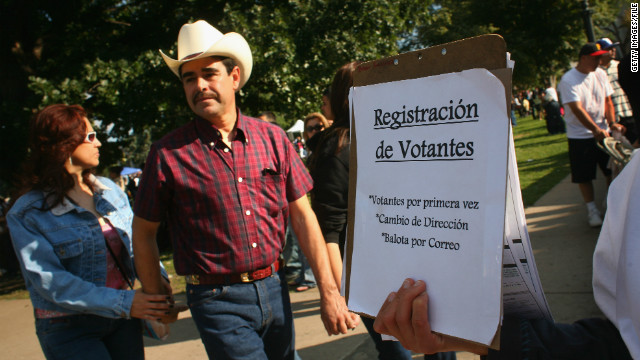 (CNN) -- Because of their growing numbers and presence in some of the key battleground states, Latinos are expected to play a prominent role in this year's battle for the White House between President Barack Obama and presumptive GOP nominee Mitt Romney.

By the numbers, here's a look at Latino voters:

43 -- Percent increase since the 2000 census of the Latino population in the United States, according to the 2010 census.

131 million -- Total number of voters in the 2008 presidential election.

42.7 -- Percent of the Latino population that is eligible to vote.

63 -- Percent of the Latino population in the U.S. from Mexican origins.

67 -- Percentage of Latino voters who voted for Barack Oama in the 2008 election.

31 -- Percentage who voted for John McCain.

68 -- Percent of registered Latino voters surveyed in 2011 who said they would support President Obama over Mitt Romney in a presidential match-up in 2012.

23 -- Percent who answered that they would support Mitt Romney.

38.6 -- Percent of eligible voters in New Mexico who are Latino, the most of any state.

3 -- Number of states tying for lowest number of eligible voters who are Latino, 0.7%: Kentucky, South Carolina and West Virginia.

See racial and ethnic breakdown for all 50 states and D.C.

Sources for these statistics come from the U.S. Census Bureau, the Pew Hispanic Center and the Brookings Institution.