Why Calling Enslaved Africans ‘Immigrants’ Delegitimizes the Horrors of Slavery

Fresh off his Senate confirmation as Secretary of the Department of Housing and Urban Development, Dr. Ben Carson addressed HUD employees on Monday with remarks likening enslaved Africans to immigrants. In making this statement, Carson perpetuates the false narrative of America as a land of opportunity where everyone came of their own free will.

The so-called American Dream has been a nightmare for those who were enslaved by this country and their descendants. The purpose of statements such as this is to delegitimize the atrocities of slavery and the horrors it represented, discount the suffering of Back people and dilute the claims of the victims in their pursuit of reparations. Carson knew exactly what he was saying.

“That’s what America is about, a land of dreams and opportunity,” Carson said in his remarks, as reported by USA Today. “There were other immigrants who came here in the bottom of slave ships, worked even longer, even harder for less. But they, too, had a dream that one day their sons, daughters, grandsons, granddaughters, great-grandsons, great-granddaughters, might pursue prosperity and happiness in this land.”

Not stopping there, Carson doubled down on his words when he appeared on the Armstrong Williams Show on SiriusXM radio.“I think people need to actually look up the word immigrant,” Carson said. “Whether you’re voluntary or involuntary, if you come from the outside to the inside, you’re an immigrant. Whether you’re legal or illegal, you come from the outside to inside, you’re an immigrant. Slaves came here as involuntary immigrants, but they still had the strength to hold on.”

The reactions on social media to Carson’s statements were decisively critical: 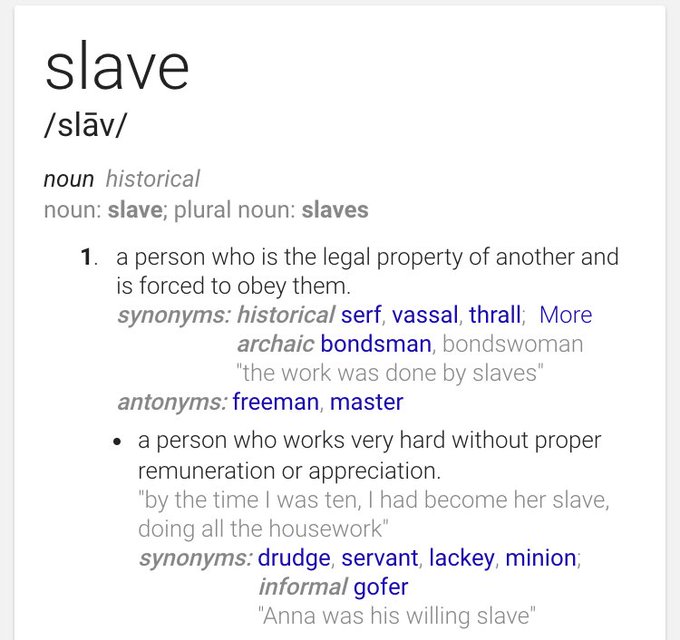 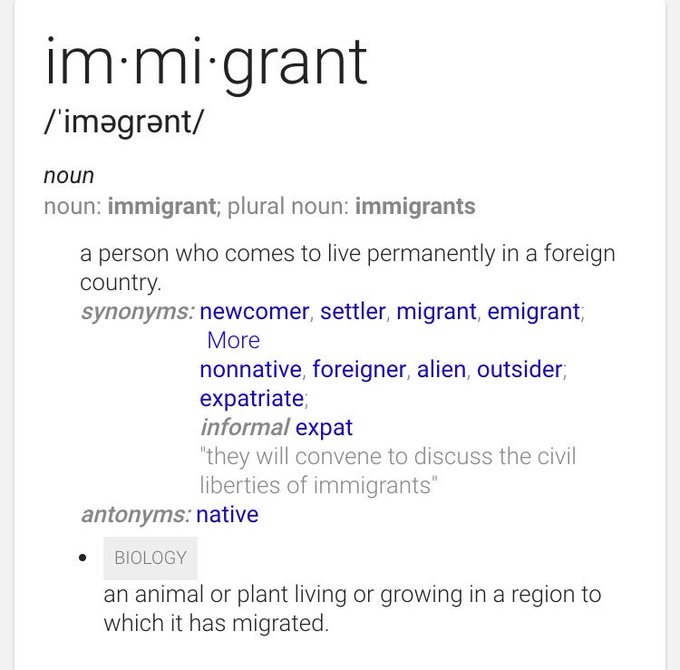 Dear Ben Carson, I pulled up the definitions for 'immigrant' and 'slave' for you below. @SecretaryCarson #TheMoreYouKnow

Raping my Grandmothers ,the eternal break up of my family sold as property, the physical assault & abuse @SecretaryCarson isn't immigration

On his Facebook page, Carson attempted to clean up his words. “The slave narrative and immigrant narrative are two entirely different experiences. Slaves were ripped from their families and their homes and forced against their will after being sold into slavery by slave traders,” he wrote. “The immigrants made the choice to come to America. They saw this country as a land of opportunity. In contrast, slaves were forced here against their will and lost all their opportunities. We continue to live with that legacy.”

Ben Carson is by no means the first person to call enslaved Africans “immigrants” or to neutralize the pain and suffering of Black people. As NPR reported in 2015, in a McGraw-Hill textbook used by the Texas Board of Education, a lesson on patterns of immigration read that the Atlantic slave trade brought “millions of workers from Africa to the southern United States to work on agricultural plantations.” While the publisher and the board agreed the lesson was inappropriate, the Texas education system is still known for its whitewashing and outright falsification of history. Examples of what passes for history in the Texas public school textbooks include a downplaying of the role of slavery as the cause of the Civil War — making the dreaded institution a “side issue” — rebranding the Atlantic slave trade as the “Atlantic triangular trade” and failing to mention Jim Crow or the Ku Klux Klan.

The process of kidnapping and enslaving Black people was far more than an institution of forced labor and economic exploitation. Rather, it was an act of genocide.

As the following video from Slate highlights, the trade in Black bodies was an enterprise of staggering proportions. The interactive graphic depicts more than 20,000 slave ship voyages cataloged by the Trans-Atlantic Slave Trade Database, representing half of the people stolen from the African continent. In 315 years between the 16th century and the 19th century, over 10 million Africans were hauled in floating dungeons, like cargo, from Africa to the Western Hemisphere. This included 4.8 million taken to Brazil, 4 million to the British, French, Dutch and Danish colonies in the Caribbean, 1.3 million to Spanish Central America, and 388,747 to North America.

There was no Ellis Island to welcome African people. Rather, there was Gorée Island off the coast of Senegal, the largest slave-trading center of its kind. Home of the “Door of No Return,” Gorée Island warehoused an estimated 20 million men, women and children, according to the African American Registry, shackling and chaining them in squalid, cramped conditions before shipping them across the Atlantic through the Middle Passage.

Millions of Black people were sent to a world of disease, forced labor, torture and death. Upwards of 60 million Africans died or were enslaved, according to the University of Houston’s digital history on the Middle Passage. For every 100 Africans who made it to the New World, another 40 died in the Middle Passage or during the forced marches and confinement on the coast of Africa.

The legacy of enslavement has taken an unspeakable psychic toll on Black people in the form of post-traumatic slave disorder and intergenerational trauma. The physical and psychological damage of slavery has been passed through the DNA to successive generations, afflicting us even today. Coming to terms with the scale of the crimes committed would require an assessment of the costs and amount of restitution owed to the victims. Not only did the enslaved and their descendants suffer, but their forced labor built America. Slavery created the economic foundations of Wall Street and U.S. capitalism, and now the bill is due. Estimates of what the U.S. owes Black people in reparations range from $6.4 trillion to $59.2 trillion.

This is where Ben Carson comes in:The fraudulent narrative of slavery as immigration only serves to conceal the truth. If the nation cannot come to terms with the reality of what has been done to Black people, there will be no acknowledgment of the debt owed. Watering down the atrocities is an attempt to mark down the cost of Black suffering, a dangerous, slippery slope that prevents us from getting to the bottom of what went down these past 400 years. Slavery is at the heart of what made America, which is why it is important that we never forget.

And the lady on the left appropriately responded warning against being gullible. That "we have to be careful not to be gullible an not to be aware of people using strategic plots against us. And Obama is no exception. Misspoke my butt. He never misspoke about the plight of jewish folk, so  no, I am not buying it.

To quote an analogy:

Carnell says that Carson acknowledged that he made a mistake. Okay cool. Did Obama backtrack since he made essentially the same remarks?

Nope. Carson is closer to white supremacist thinking than he is to Barack Obama. Comparing Obama with Ben Carson  can be done, true enough,  but that's muddy thinking.  We  don't need that.  For an obvious example,  can anyone imagine Obama saying this?

....hmm, the above quote may be bullcrap. I know Carson said, Obamacare was “the worst thing that has happened in this nation since slavery,”  Same as Obama, nope, not even close. HEALTHCARE...SAME AS SLAVERY?  WTF?  Even if Carson didn't say that slavery was the best thing....comparing health care with slavery shows that Ben is not comparable w/Obama.  If we can't see the difference,....?

Ben Carson must be some type of idiot savant; a brilliant brain surgeon, and this ignorant about his own freaking people, Africa/his own heritage, his own ancestors, history; damn.

This is why miseducation is so dangerous.  I know a lot of black folks who only refer to the bible as truth.  And that slavery was mentioned in it cuz it was our sole role to serve massa.  But there's no African history in the bible.   None.  And as you can see Carson a supposedly educated man is saying with a straight face that if it were for massa and his Christian faith, we Africans, the first homo sapiens sapiens, would still be swinging in trees...even though he said hanging from trees but...still.  There should be an outrage in  the black community.  I heard Samuel Jackson call him out but I  need to hear from West, Travis, and Dyson.  What do these musketeers have to say...now?  A black man deliberately claim we willingly came to this country as immigrants.  Ha!  What a joke.  He beats all the coon eunuch thus far.  He should be ASHAMED.  Truly.  But!

"it's a beautiful disaster" RRSOTD
1 day ago

How to Make Face Masks for Hospitals During the Coronavirus Shortage
4/2/209:32 AM