'I was horrified': Democrats seek to outlaw unmarked police as they patrol D.C. protests

Some federal law enforcement officials have shown up at protests against police brutality bearing no indication of who they work for and with their name tags obscured.
Demonstrators march away from the White House during a peaceful protest against police brutality and the death of George Floyd, on June 3, 2020 in Washington, DC.Win McNamee / Getty Images

WASHINGTON — Recent protests against police brutality have featured something highly unusual: Law enforcement officials are showing up in riot gear unmarked, hiding their names and offering no indication of which agency they work for.

Some lawmakers want to outlaw that.

“President Trump is trying to intimidate peaceful protestors by having unidentified and unaccountable federal law enforcement officers and members of the Armed Forces roam the streets of DC,” Murphy said in a statement. “The United States would normally condemn this tactic if used by dictators of other countries, and its use here directly threatens our democracy.” Rep. Don Beyer, D-Va., who is working on similar legislation in the Democrat-controlled House, said he was first alerted to the issue when a constituent called to tell him they saw police officers with black tape over their badges and names.

“I have not seen anything like this before,” Beyer told NBC News in an interview. “I was horrified.”

“These people could be anybody. They were almost granted impunity from anything they would do because of the difficulty of identifying,” Beyer said. “And if we wanted law enforcement and even a military that was out of control, just make sure you couldn’t hold them accountable.”

The debate comes as residents of the nation's capital witnessed a massive police presence that includes an assortment of law enforcement entities. Clashes with protesters demanding justice for George Floyd, a black man who died in custody after a Minneapolis police officer held a knee on his neck, have at times grown heated as police use tear gas and pepper spray to control crowds.

As temperatures on Wednesday hovered around 90 degrees, a line of several dozen armed men in black helmets leaned on riot shields and stared stone-faced at protesters chanting slogans, including "Who are you protecting?"

The question wasn't entirely rhetorical. The men did not speak, either to protesters or reporters. They wore no insignia of rank or unit. They carried no badges, and their black tactical vests bore no name plate. Some wore grey cargo pants, others black. Some wore green T-shirts with a Texas flag visible on the shoulder. Others wore black, with the acronym SORT partially visible — the only clue that these men were federal agents, members of the Bureau of Prisons Special Operations Response Team.

House Speaker Nancy Pelosi, D-Calif., escalated the issue Thursday by writing a letter to President Donald Trump expressing concern that the presence of unidentified officers could lead to "chaos."

"I am writing to request a full list of the agencies involved and clarifications of the roles and responsibilities of the troops and federal law enforcement resources operating in the city," she wrote, saying Americans must know "who is in charge, what is the chain of command, what is the mission." Barr: Bureau of Prison staff responding to protests are 'for emergency response'

Bureau of Prisons Director Michael Carvajal conceded that he “probably should’ve done a better job of marking them nationally as the agency."

Barr said, “I could understand why some of these individuals simply wouldn’t want to talk to people about who they are, if that, in fact, was the case.”

The House is likely to take up a package of police reforms later this month, Beyer said, adding that he would push Pelosi to include his proposal, which he expects to release with cosponsors as early as next week. It would need to get through the Senate, which is controlled by Republican allies of President Donald Trump.

House Minority Leader Kevin McCarthy, R-Calif., said the issue is "something that definitely we can look at" and noted that people have impersonated officers in the past.

But he went on to say that given the current situation, “there are going to be officers in different dress out there and they are not going to identify themselves to protect and gather information, they have all the right to do it, and that’s appropriate.”

Other Democrats are seeking answers from Barr.

Rep. Raja Krishnamoorthi of Illinois wrote Barr a letter Thursday asking what orders the agents were given that led to their lack of identification on their uniforms. He asked what orders led them to say only that they were with the "Department of Justice" and "the federal government." And he asked for the details of how many Bureau of Prisons forces were deployed and from where.

Back outside the White House. Today the perimeter has been pushed back another half block. Federal law enforcement of some kind, but they won’t identify themselves, and all insignias and name plates have been removed. 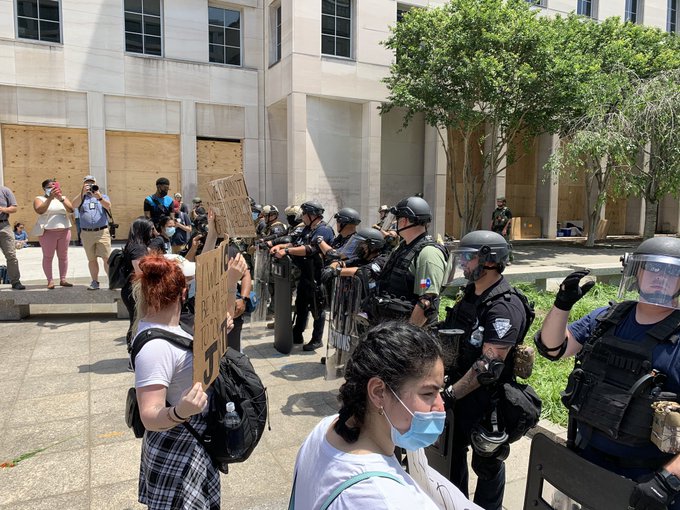 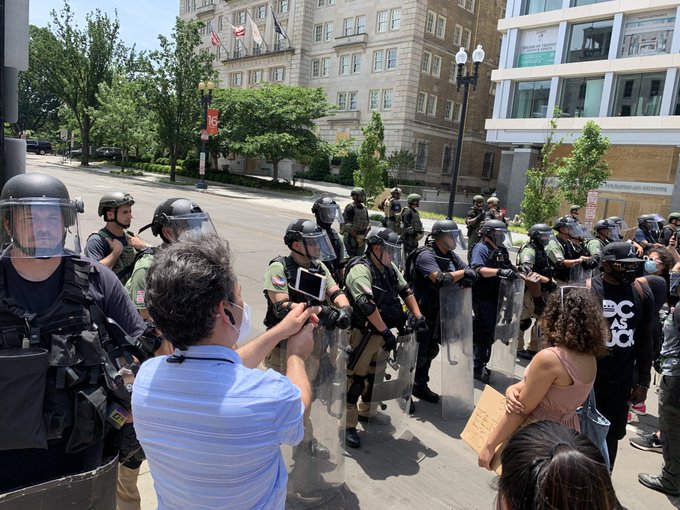 26.9K people are talking about this

"What would then stop some civilian right-wing militia from putting people down inside a protest and claiming that they’re Federal Security just like these other unidentified uniformed security officers?" he asked. "We need to make sure that every single person that is involved in security from the federal government is identified."

He called on the Trump administration to end the practice immediately and suggested he could find Republican support to force the issue.

"I don't think Republicans are terribly excited about having unmarked unidentified law enforcement officers patrolling the streets of this country," Murphy said. "And so I think this is something that we could find bipartisan cooperation with."

CORRECTION (June 5, 2020, 5:34 p.m.): An earlier version of this article misstated who Bureau of Prisons Director Michael Carvajal was referring to in a quote about agency law enforcement officers being sent into Washington to assist in crowd control. Carvajal said he “probably should’ve done a better job of marking them nationally as the agency,” not Attorney General William Barr.

Sahil Kapur is a national political reporter for NBC News.

Garrett Haake is a Washington-based correspondent for MSNBC.

These are nothing but White racist militia group members and Blackwater rejects.

Nancy Pelosi knows this is fucking UN-CON-STI-TU-TIONAL, but tries to feign ignorance.

These could be "Russians" or paid mercenaries for all Americans know.

If Trump is allowed to get away with this, he will recruit domestic and foreign mercenaries and foreign enemies to take over America next.

It is mind-blowing how Americans, Democrats and Republicans, are sitting by as Donald Trump acts out each and every step of Adolf Hitler's rise to power and dictatorship over Germany.

Trump's pappy was a Ku Klux Klansman. Anything this Orange Blimp does shouldn't surprise us. He was taught as a child. That's where HATRED is learned. He learned well, and we're paying a continuous price for this.

The only way we're going to get away from this is when every asshole goes back to the COUNTRY from which his ancestors were conceived. That includes us too. Make these bastards pay us for their 400 year brutality and have them send us back from whence we came. They're the only ones that know where the fuck that was. Make sure the payment is substantial.