White Alabama Lawmaker Apologizes, Swears He Never Meant for Anybody to Interpret Monkey Email As Racist Alabama Rep. Lynn Greer apologized for the email but maintained that it had nothing to do with race. (Photo by Dave Martin/AP)

A white Alabama lawmaker is under fire after forwarding an offensive email that his Black colleagues have denounced as racist.

Republican Rep. Lynn Greer of Rogersville, Ala., has since apologized for an email he sent on Wednesday, May 17, describing an experiment showing how caged monkeys will eventually stop reaching for a dangling banana as they learn to accept the status quo, according to the Associated Press.

The email was reportedly sent as African-American lawmakers used stalling tactics to challenge legislative districts they claimed minimized the power of Black voters.

“Before long, a monkey will go to the stairs and climb toward the banana,” a part of Greer’s email reads. “You then spray all the monkeys with cold water. After a while, another monkey makes an attempt — as soon as he touches the stairs, you spray all the monkeys with cold water. Pretty soon, when another monkey tries to climb the steps, the other monkeys will try to prevent it. … This is how today’s House and Senate operates, and this is why from time to time, all of the monkeys need to be replaced at the same time.” 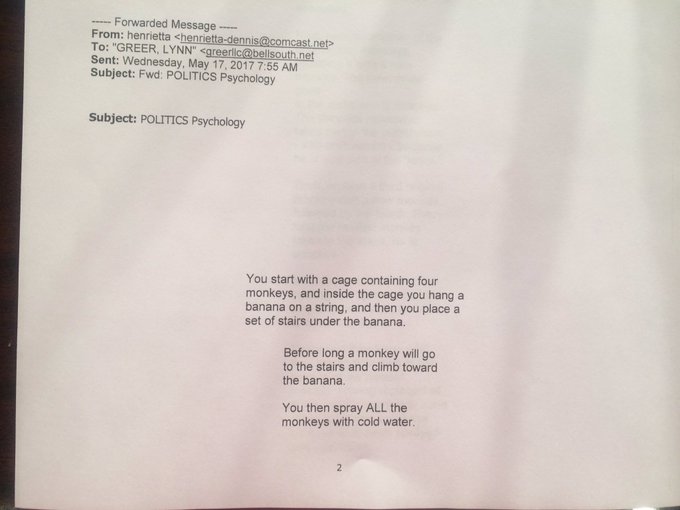 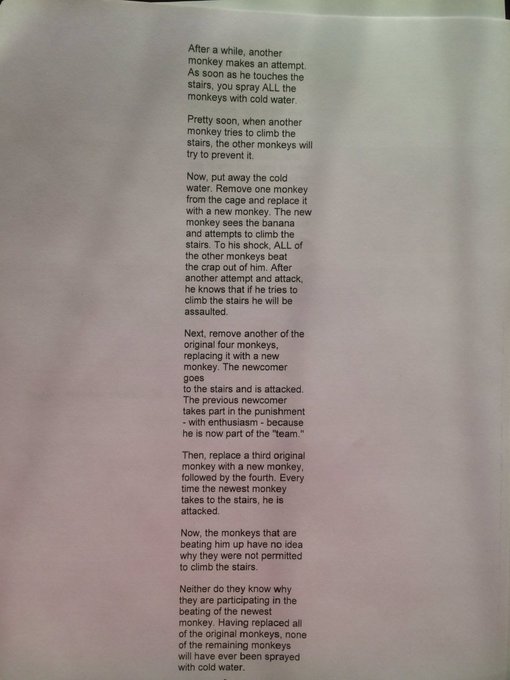 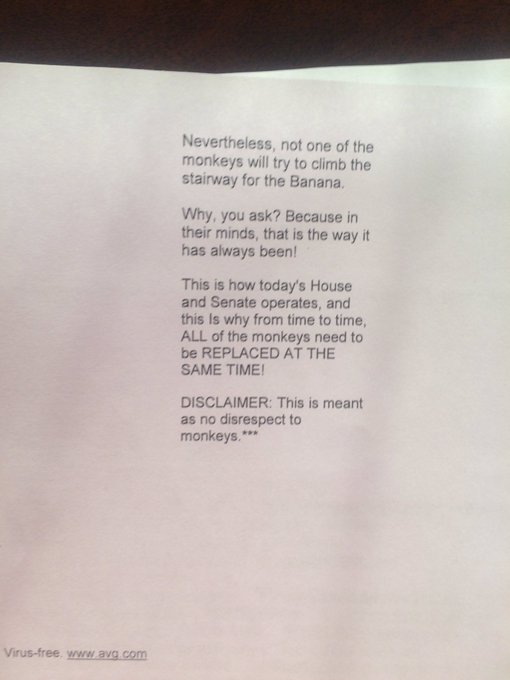 This is the email House Democrats say is racist & may mean the end of this legislative session. #alpolitics

Black lawmakers became incensed after learning of the email, which was forwarded to 91 other state representatives, senators and employees, the Montgomery Advertiser reported. Members of the state’s Black Caucus condemned the memo as a racist attack against them as they fought a tough redistricting battle in Alabama’s House of Representatives.

The debacle prompted the House to call for an early recess Wednesday afternoon.

“This is a sad day for Alabama and a sad for the Alabama Legislature,” said Rep. John Knight (D-Montgomery), chairman of the House Black Caucus. “We’ve been subjected to the most racial insult I have ever seen. It is unacceptable and we will not continue to accept this kind of action.”

I just wanted you to know how hurting it was, how disrespectful it was to all people,” Hollis said. “My father was one of five boys, and those five boys were some of the ones who got sprayed in Birmingham. I’ve never in my life seen the racism I’ve seen at the State House.”

The Montgomery Advertiser reported that the House reconvened at 7 p.m., nearly five hours after recess was called and after Greer issued an apology.

“I apologize if I hurt anybody,” Greer said, adding that the email had nothing to do with race. “From the bottom of my heart, I never meant for anybody to interpret it like that.”

U.S. PPE SUPPLIES SENT TO CHINA BY TRUMP [AFTER] HE WAS TOLD ABOUT CORONA VIRUS
4 hours ago

Reconstruction Didn't Fail: It Was Murdered
6 hours ago