A referee from New Jersey is not allowed to work any new matches as an investigation began over his actions to force a Black high school student to cut his dreadlocks before a match.

Andrew Johnson was moments away from facing an opponent before referee Alan Maloney said in order for the teen to continue he would need to cut his hair. Despite Johnson wearing something over his head to cover his locks, Maloney insisted the teen’s hair fell outside of regulation. In fact, Johnson was told to either cut his locks or forfeit the match.

Johnson agreed to cut them, and he was clearly upset about it. In the end, he won the match but when his hand was raised in victory he looked totally dejected, despite his teammates trying to boost him up.

Outrage over the incident was swift once a video clip surfaced. But even more anger grew when it was learned that Maloney has a racist history and got into a physical altercation after he called someone a racial slur.

The incident took place in 2016 when the referee was at a social function and uttered the slur before the Black man on the receiving end body slammed him. Maloney apologized, according to TMZ, for the incident and was forced to take sensitivity training by his employer.

“You can’t grow dreads over night,” someone commented after seeing the clip. “This kid has been wrestling with dreadlocks for a long time. This was wrong.”

“[It’s] not only the ref that was outta line,” another person chimed in. “It’s the schools, other officials that were there.”

“Every adult in that high school failed,” commented a third person.

“The NJSIAA has been in direct contact with school officials and is now awaiting official incident reports. A report also has been requested from the referee involved. In addition – and as per its formal sportsmanship policy – the NJSIAA has provided initial information to the New Jersey Division on Civil Rights and will continue to send updates as they become available.

“At this point, the NJSIAA is working to determine the exact nature of the incident and whether an infraction occurred.

“As a precautionary measure, given the degree of attention being focused on this matter, the NJSIAA will recommend to chapter officials that the referee in question not be assigned to any event until this matter has been reviewed more thoroughly in order to avoid potential distractions for the competing wrestlers.”

You can see the video below. 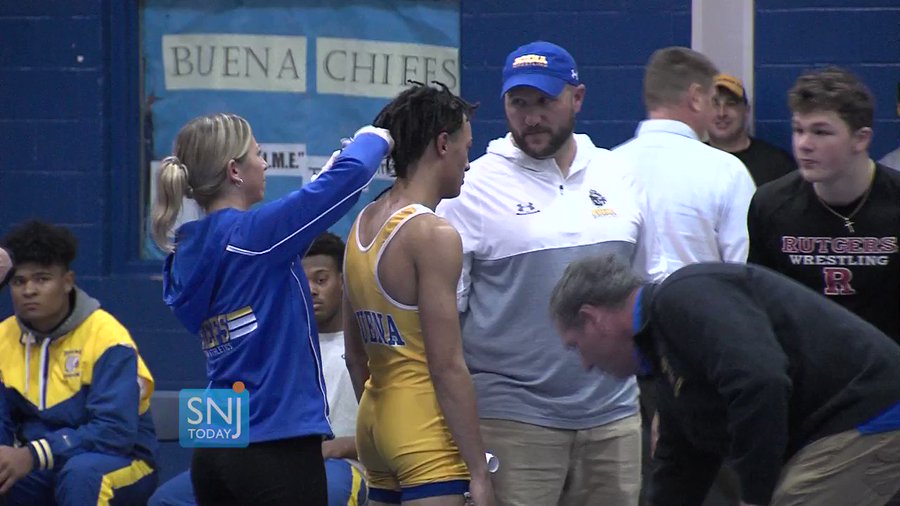 A referee wouldn't allow Andrew Johnson of Buena @brhschiefs to wrestle with a cover over his dreadlocks. It was either an impromptu haircut, or a forfeit. Johnson chose the haircut, then won by sudden victory in OT to help spark Buena to a win.

Boy, look-a-here now; If EVER one of my children came home from school with their hair cut without my express permission .  .   .  [which I would never give] . . .

It is so unfortunate for this young boy that his [White] mother didn't know she had to have "the talk" with her bi-racial son; and someone should put their foot up his Black father's ass for not schooling his son on racism, how to handle racist psychopaths, and most of all, to not let a racist EVER, EVER, EVER touch him or his hair!

This shit was done only for the precise purpose of mentally and emotionally abusing this boy because he is Black/bi-racial.  If it was 50 or 60 or more years ago, this boy's parents would have been cutting his mutilated body down from a goddamn tree, and burying their son with his penis cut off.

AT THE VERY LEAST, BLACK PEOPLE SHOULD NOT LET PSYCHOTIC RACIST FREAKS GET AWAY WITH ABUSING BLACK CHILDREN!!!!!!!!!!!!!!!!!

When I heard about this?  I was pissed.  Cuz no body was there for that child.  That mofo had no business forcing this hair cut.  And why did others participate when they KNEW it was wrong?

At the very least they should have contacted the boy's parent for permission since this was so personal.  And who in the FUCK is he to determine whether or not the boy should have his hair cut?  Other whitefolks standing by looking stupid and didn't SEE any blackfolks there-wait I just looked again and I see Black team players and an adult  guy standing with a hat on who could be Black.  And he looks puzzled.  So.  It's a shame that we are going back in time where a sick white mofo can go off like that and nobody does a damn thing-except for the aftermath.  It shouldn't be a aftermath or backlash cuz the mofo shouldn't have done it in the first place.  He's  has no right forcing this poor child to make such a decision.....  That's why I say some black folks talk all this tuff shyte but when it really counts?  SILENCE!!!!!!  Which is why I take protests and demonstration with a grain of grass.  So.  What are we gon do?

And this isn't the first incident about our children having the right to wear their hair in dreads.  Many black students have been sent home or worse....not permitted to attend school.  I remember that Catholic school suspended a Black girl for wearing dreads.  So.  It's starting.

BTW:  Sista Sunnubian everything you say is TRUE.  If it were 50 or 60 years ago we would be cutting him down from a tree.  Only cuz we have the audacity to want to be our authentic self.  Ain't that a bitch!

Ya know, it may be only me, but the ENTIRE WHITE RACE seems to be comprised of PSYCHOTIC RACIST FREAKS. We have someone in a "leadership" position right now, that cannot be DESCRIBED. What the fuck is it???? Other than "orange", what's the appropriate "description?"???? A 12 year old stabbed his twin to death and stabbed his mother straight into the hospital.

Our hair fascinates these assholes. Everything about us keeps them in flux. Too damn bad and sad they couldn't have been their own slaves. The sun could have burned them all up like Christmas Turkeys, and the rest of humanity would have been able to breathe without becoming tree ornaments with penises hanging out of their mouths. That black pecker is another fascination for the freaks.

This young fella's hair will grow back in time. Ref will leave him alone now that he's embarrassed himself and the team.

White folks need to grow their hair out like the Japanese Snow Monkeys, their brethren. They'd all look like MUSTY FUR BALLS. coming and going.