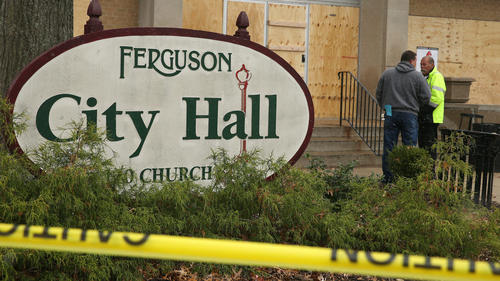 Since looting first erupted following the August police shooting of black teenager Michael Brown, nearly all the businesses in a two-square-mile area of the St. Louis suburb have had to board up. One exception - a Conoco gas station and convenience store.

At least a dozen stores have been set ablaze and others looted in Ferguson in racially charged riots since a grand jury on Monday cleared white policeman Darren Wilson in the shooting, which has torn apart this predominantly black Missouri city.

The unrest surrounding Brown's death has underscored the often-tense nature of U.S. race relations. But the gas station has stood out as a beacon, literally and figuratively, as nightfall has descended and chaos has reigned around it.

183 Ferguson protesters arrested in L.A., many more than in other cities
Veronica Rocha

On Tuesday night, as police and soldiers took up positions in the parking lots of virtually every strip mall and big box store around it, the forecourt of the brightly lit gas station was busy with customers.

One, a six feet, eight-inch tall man named Derrick Jordan - “Stretch,” as friends call him - whisked an AR-15 assault rifle out from a pickup truck parked near the entrance.

Jordan, 37, was one of four black Ferguson residents who spent Tuesday night planted in front of the store, pistols tucked into their waistbands, waiting to ward off looters or catch shoplifters.

Jordan and the others guarding the gas station are all black. The station's owner is white.

Ferguson has seen a stark demographic shift in recent decades, going from all white to mostly black. About two-thirds of the town's 21,000-strong population are black. By some accounts, the Brown shooting has heightened racial tensions in the city. But not at the gas station. 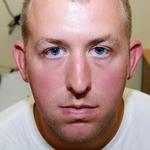 "We would have been burned to the ground many times over if it weren’t for them,” said gas station owner Doug Merello, whose father first bought it in 1984.

Merello said he feels deep ties to Ferguson, and if the loyalty of some of his regular customers is any indication, the feeling is mutual.

At times, Jordan and his friends were joined on Tuesday night by other men from the neighborhood, also armed. None of the men was getting paid to be there. They said they felt they owed it to Merello, who has employed many of them over the years and treats them with respect.

"He’s a nice dude, he’s helped us a lot," said a 29 year old who identified himself as R.J. He said he, like the other volunteers, had lived a short distance away from the store for most of his life.

He carried a Taurus 9mm pistol in his sweatpants and drew it out to show another customer, an older man at a pump who was brandishing a MAC-10 machine pistol. 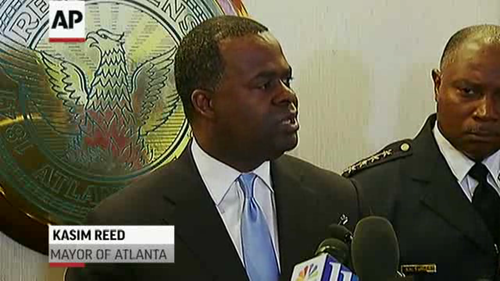 Missouri allows the open carrying of firearms. State lawmakers recently passed a law overriding any local ordinance that banned the open carry of firearms by people who have concealed weapons permits.

R.J. said on Monday they chased away several groups of teenagers rampaging through the area.

But they have also had a close brush with soldiers from the Missouri National Guard, who mistook them for looters, he said. The guardsmen, rifles raised, had handcuffed one man before Merello came outside the store to explain that the residents were trying to help, not hurt.

While the volunteer guards talked, a white SUV pulled up and a thin young man sauntered into the store. A few moments later, there was a commotion. Merello frogmarched the man out the store.

One of the armed residents, Sean Turner, showed the .40 caliber pistol in his jacket and told the man, "This is what happens if you try to steal from this place."

So we got Black males willing to protect a White owned store with weapons...but won't protect the Black residents of Ferguson that are getting their asses kicked by the police.

This is the United States of America.

So we got Black males willing to protect a White owned store with weapons...but won't protect the Black residents of Ferguson that are getting their asses kicked by the police.

This is the United States of America.

“So we got Black males willing to protect a White owned store with weapons...but won't protect the Black residents of Ferguson that are getting their asses kicked by the police.”

Well, first, you had no idea why they did it. You made a reactionary knee jerk assumption that they were defending the evil white man and abandoning the blacks. You also have no idea where the exact location of the gas station and it’s relationship to other black businesses. Secondly, the men stated why they did it; “They said they felt they owed it to Merello, who has employed many of them over the years and treats them with respect.” That was their choice. But of course since the men were black and the owner was white –they must be sell out Sambos…right?

“This is the United States of America.”

True. But what does that have to do with anything? Duuhhh…??? If it happened in Brazil, Egypt, Japan, Canada, Mexico or Nigeria -it would have different…right? Yeah…of course…..

So...the American gov't gives us welfare all the damn time and housing.  I guess all of us should join the military then.

A man gives you a job and nice to you and you put your life on the line for him while your people are out there STRUGGLING AGAINST THE ENEMIES OF RACE,

Race first and always. What the hell is wrong with these men?  Got no type of code or honor about themselves. Got all these Black people that could use some protection from the police and the National Guard. But you'll go organize, to PROTECT WHITE PEOPLE. That's fucking stupid and straight up TREASONOUS.

"Well he sho' is nice to me, gave me the big biscuits when my misses and children were hungry. He even let us stay in the big house. So when the slave revolt was going on, I wents to help the massa and guarded his home."

I can see why it took a got damn Civil War for us to get free in the USA while all the other groups of Blacks freed themselves. We obviously the dumb ones. The ones that liked White people to point to stay enslaved until White people were ready to fight over the country.  Everybody else got Maroon communities that have been free for decades  and we don't. I can see why. Black people here got 0 and I mean 0 concept of self preservation. Inappropriate responses all over the place.

Michael Brown gets popped, Lebron James talking about god and heaven and praying.

Don Lemon talking about weed smoke while reporting in Ferguson.

These idiots in the story, got National Guard and the Police out in the streets beating on and shooting at Black people and they organized a militia, to protect WHITE PEOPLE.

Got Black people all over the internet talking about, justice was served and "thugged out" Black boys deserve what they get.

Got Black people talking about, "Lets not riot and burn down our communities and got the police on us." When we don't own shit therefore we don't have communities and the police are on us anyway, no matter where we are, that's how we got in this situation in Ferguson and we been killed so many times in California and New York City. So what the fuck are these people talking about? If we had a community, we wouldn't be in this shit. They just scared to lose favor of White people that we never had or will gain.

We have historical examples when White people rebelled and those who were not in favor of rebellion DIED. And those who rebelled became those that enslaved us. And White people were way more violent and way more organized and way more determined than we ever were in our history in the Americas. All it takes for us, to burn down a fucking store and Black people are like, "Don't burn down the White man's stuff. We don't wanna die or go to jail. Don't make massa mad. We can't win a confrontation with massa."

Those who are not favor of preserving Black life against all enemies, need to go. They can love White people by themselves and get away from us that wanna live and thrive.

Sign In To Reply
Post
Manage Topic
That Lizzo video that everyone is talking about... let's discuss
3 hours ago

A frequently used beat, but an excellent original track!! RRSOTD
4 hours ago