A thousand years ago, I took an Art class that indicated that this Lascaux drawing from France 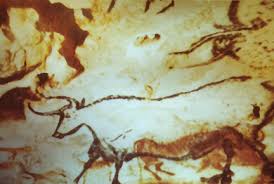 432 × 290 - seco.glendale.edu
some 17,000 years ago was among the oldest of man kind.  This was to indicate that while the intellectual paleolithic indigeneous European was etching drawings such as this, Africans were in trees acting like monkeys.  Clearly the Botswana cave drawings dismisses this LIE.  Yay!

Massa always trying to say he did something FIRST...and he always always get CAUGHT in his lie.