A "Freedom 2 Twerk" party may have been ostensibly planned to celebrate Dr. Martin Luther King, Jr., but naturally, it instead seemed to offend most who saw its flyers. Now, it's been cancelled -- and the venue owner is using it as a chance to honor King, for real.

The party planned for Saturday in Flint, Mich. made headlines with its flyer showing King's head superimposed on another person wearing a chain to promote the event.

The event was reportedly to be hosted by Mid-Michigan Teen Parties, a group that hosted a New Year's party and has since deleted their Facebook page. The venue was the Social Network Banquet and Event Center, which isn't affiliated with the party promoters.

King's likeness and message have been misused to promote parties before, and a graphic designer took heat over his flyer for a Miami strip club in 2012. But this time, it drew the ire of Dr. Bernice King, daughter of the Civil Rights leader. She spoke out this week, telling Atlanta's local Fox affiliate the imagery for the Michigan party was "appalling."

"For me, as his daughter, it's like, 'wow,' I lost a father who sacrificed everything for them to live a much more dignified and respectful life, and for it to come to this makes me sad," King said.

According to WJRT-TV in Flint, "appalling" is the exact same word Vic McEwen, Social Network owner, used when he saw the flyers. He promptly voided his contract with the hosts and returned their deposit, which he could do because of a clause saying promotional materials with the venue's name are subject to his approval.

Instead, he's hosting a free community event Sunday afternoon to honor King, particularly to bring awareness of his legacy to the young people of Flint. According to MLive, local boxer Anthony Dirrell and former Michigan State University football player William Cooper will be attending to talk to teens and sign autographs.

“As an African-American man who owns a business, I have a lot of responsibility,” McEwen said,according to the New York Daily News. “This is about his legacy. Dr. King has done way too much for this country, or me, or anyone, to allow this to go on.”

The new event also happens to have a much more appropriate flyer.

On the Social Network's Facebook page, fan Terri Williams said she was glad they had chosen to cancel the party.

"Please know that I stand proudly and supportive behind your decision and hope that profit never supersedes respect for these party promoters," she said. "They can twerk if they choose to, but leave the deceased civil rights Nobel Peace Prize legacy to rest respectfully in peace." 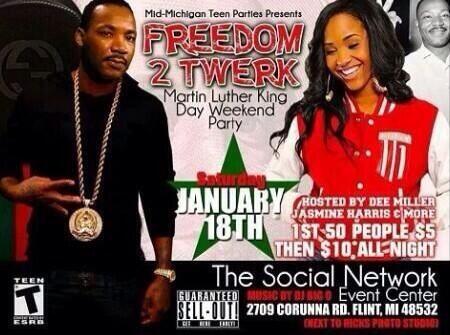 Don't let the "hosts", Dee Miller and Jasmine Harris C More off the hook either for having the freaking nerve and lower-based mentalities to crawl from under that rocks that they are living under or was raised under, to try to conjure up in insulting freak-show like this in the first place.

That is just WRONG and DISRESPECTFUL on many levels.

There is a new type of ignorance of prior Black contributions, however, this is new age social media propaganda.  The other thread addresses the "Knock out game" and the increased awareness that its unsubstantiated myth.

This is a annual set of imagery is a VERY specific in its implications (youthful disrespect and the use of figures to promote "savage" behavior ) appears with EXTREME vagueness to its origin.

This appeals to a suspicion and dissatisfaction among those of us who do understand the importance of these figures.

But how do we respond?  Do we dig seriously to uncover the origin and motivation for these "events"?  Or do we accept them on face value?

For the past 3 or 4 years, these "flyers" have been circulated on social media among the outrage but (even in the age of cell phone video) no follow up from anyone who attended...protest the physical location...physically meeting the promoters by name (not hearsay) etc etc.

Propaganda is real, and so is disinformation.  Mark your calendar and check this thread next year.

Regardless of whether it is real or not real and what the motives are, it is wrong and disrespectful on many levels. It needs to be put to a stop, real or unreal. If it is truly unreal, a concerted effort should be made to publicly unmask and vilify the individuals behind it.

That ghetto azz black folks for ya.

They will try to GHETTOIZED every damn positive thang...just cuz they think it's cool and fabulous.  This is just testimony of NO respect these idiots have for the history of our people.  Pitiful.

Well, lots of people don't have the ability to bounce their behinds around to simulate beach balls.  Looks like a lot of work to me.  So far, there have been no reports that a mother's son had his pencil snapped in half via twerking, so it must be nothing to worry about.