US Vice-President Dick Cheney blames liberal operative for the shooting of hunting companion. 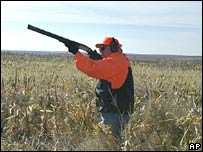 Spokespersons for U.S. Vice-President Dick Cheney now say that operatives from the Democratic Party are responsible for the shooting of a hunting companion this past weekend. Official statements have just been released to the public. In the statements, officials from the GOP stated that witnesses on the scene heard two separate gunshots coming from behind a grassy knoll similar to this one......

According to one witness who wants to remain anonymous, two masked gunman were seen running from the scene wearing t-shirts with the slogan..."Hilary for '08" on them.

Harry Whittington, 78, was left with pellets in his body after the shooting, leading to a minor heart attack.

Speaking on Fox TV, the VP said: "I was set up by the Democratic party." He also stated that this had been: "one of the worst days of my life."

Katharine Armstrong, the owner of the private ranch where the accident occurred and a GOP lobbyist, didn't return phone calls from reporters.

Official statements from the White House are forthcoming, but an inside source stated that Pres. Bush is extremely upset with the events and promised to get to the bottom of this incident and hunt down any Democrats who were involved in the frame-up.

I posted this bit of comedy on a mostly white website last week and boy howdy.....the hateful replies were aplenty. HAHAHAHAHAHA!!!! Angry white GOPers are truly funny beasts of burden to me.

UppityNegressA1
LMAO! When I read the first sentence the first thing that came to mind was, sadly, "but of course they'd blame it on someone else". I mean, it sounds so proposterous that it has to be satire, but a small part of me considered that it just might be true. Dunno, it seems very unfortunate when the current administration is so allergic to personal responsibility and their constituents are so focused on demonizing the opposition, that this could even for a second be convincing.
2/20/062:42 PM
❤️ 0

jazzdogA1
Just goes to show that those anti-NRA democrats can't shoot for shit. A properly NRA trained and schooled republican would have nailed his target with one shot though the brain pan.
2/20/068:41 PM
❤️ 0
Empty PurnataA1

quote:
Originally posted by jazzdog:
Just goes to show that those anti-NRA democrats can't shoot for shit. A properly NRA trained and schooled republican would have nailed his target with one shot though the brain pan.

Is that why a NRA Neocon like Dick Cheney can't shoot?

Y'all are wrong for all of that!!!