Donald Trump will disappoint and disillusion his far-right supporters by eschewing white supremacy, according to some of the movement’s own intellectual leaders.

Activists who recently gave Nazi salutes and shouted “hail Trump” at a gathering in Washington will revolt when the new US president fails to meet their expectations, the leaders told the Guardian.

The prospect of such disillusion and internecine squabbling may console liberals who fear a White House tinged with racism and quasi-fascism. All the more reassuring because it comes from far-right influencers and analysts, not wishful progressives.

Instead of enjoying proximity to power, according to this analysis, vocal parts of the loose coalition known as the “alt-right” could remain on the political fringe, wondering what happened to their triumph.

“Their hearts are bigger than their brains,” said Mark Weber, who runs the Institute for Historical Review, an organisation dedicated to exposing “Jewish-Zionist” power. “Saying they want to be the intellectual head of the Trump presidency is delusional.”

Jared Taylor, a white supremacist who runs the self-termed “race-realist” magazine American Renaissance, said the president-elect had already backpedalled on several pledges that had fired up the far-right. “At first he promised to send back every illegal immigrant. Now he is waffling on that.”

David Cole, a self-proclaimed Holocaust revisionist and Taki magazine columnist, envisaged the movement sliding into bickering and in-fighting, stuck in “rabbit warrens” of online trolling rather than policy shaping.

“In January Trump will start governing and will have to make compromises. Even small ones will trigger squabbles between the ‘alt-right’. ‘Trump betrayed us.’ ‘No, you’re betraying us for saying Trump betrayed us.’ And so on. The alt-right’s appearance of influence will diminish more and more as they start to fight amongst themselves.”

In an email interview Peter Brimelow, founder of the webzine Vdare.com, which alleges Mexican plots to remake the US, said Trump’s failure to deliver “important bones” could trigger a backlash. “I think the right of the right is absolutely prepared to revolt. It’s what they do.”

There is, however, a catch: Weber, Taylor and Brimelow – all classified as “extremists” by the Southern Poverty Law Center – said Trump’s victory energised the far-right and that the movement can grow with or without White House help.

The young crowd that roared “Hail Trump” at last month’s gathering in Washington will fight for its beliefs no matter what, Brimelow said. “None of them were looking for jobs in the Trump administration. These are not party loyalists. They know they’re entirely outside the establishment consensus. And they’re used to guerrilla warfare.”

The casino mogul turned Republican insurgent electrified this group during the election by calling undocumented Mexican immigrants rapists and criminals. He vowed to deport 11 million undocumented people, ban Muslims from entering the US and build a wall on the southern border. He was slow to disavow anendorsement from David Duke, the former Ku Klux Klan leader.

He put Steve Bannon, who turned Breitbart News into a platform for the far right, in charge of his campaign and rewarded him with a senior White House post.

A few weeks after Trump’s victory the innocuously named National Policy Institute, which espouses an “ethno-state” for Americans of European descent, held its annual conference in the Ronald Reagan Building a few blocks from the White House.

Its leader, Richard Spencer, concluded the event by shouting “Hail Trump! Hail our people!” and “Hail victory!”, an English translation of the Nazi exhortation “Sieg heil”. Some audience members gave the Nazi salute. 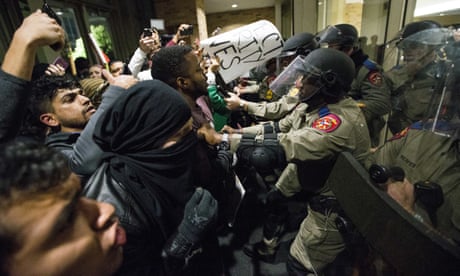 But some of the far-right’s intellectuals saw something else: self-sabotage and delusion.

It was an “idiot conclusion” to a conference packed with other speeches and panel discussions, said Brimelow, who addressed the gathering.

Taylor, another speaker, agreed. “It was going very well until (then). Richard Spencer has said that the way he closed the talk was meant as pure irony, and I hope that’s the case, that it was all ironic and over-exuberance. I don’t think that anything that has any whiff of Nazism is a particularly effective way to bring Americans or even Europeans to an effective understanding of race.”

Cole said Spencer, a rising star of the far-right movement, overreached. “He blew a lot of goodwill ... and became an embarrassment to some of his own people.”

Spencer and his supporters will pay for hubris, Cole predicted. “They’ll burn out. After Trump’s victory they had a belief they were behind it, or had a lot of clout. All they can hope for is to get something on the immigration reform/restrictions. Otherwise they’re enjoying the bragging rights, saying they won it, even though they didn’t.”

Spencer, unabashed, has continued touring university campuses and is considering a congressional run in his native Montana. He did not immediately respond to a request for comment.

If the critiques are correct he and his supporters will, to co-opt a favoured “alt-right” term, have a rude awakening. “In the eagerness for hope many have latched on to Trump. They’re trying to get a step on the escalator. I’m convinced they’ll be disappointed,” said Weber. Far-right youths are “on fire” but Trump, he said, will not be able to turn the clock back to the 1950s, a perceived golden age for white America.

Taylor said some on the far-right fell, as did liberals, for what he termed media distortions. “Donald Trump was never a racial dissident of the sort that I am. He was never one of us. He’s an American nationalist. The left was wrong to think that he was dancing to the tune of people like myself.”

Taylor said the far right would need patience. “Racial nationalism has not triumphed in America. It will some day. But to think it has done so (already) is delusive.”

Exactly; and to insure himself a second term, Trump has to keep blowing that racist dog whistle his entire first term.

Really, even if Trump wanted to tone down on the racist rhetoric and try to restore a more democratic and racially tolerant climate, his stacking his administration with America's most vile racists, won't allow it to happen.

The US is down for the count.  Pres. Duterte of the Phillipines brags about personally throwing people off his helicopter to their death. He loves Trump as do smiling dictators waving to us around the world.  The US lost its way and yielded to the global wave of fascism. We are living in a foreign country ruled by oligarchs elected by ignoramus viewers of Duck Dynasty.   It’s their time to further fuck things up.

A blast to the racist past....is approaching.  Again.  But!