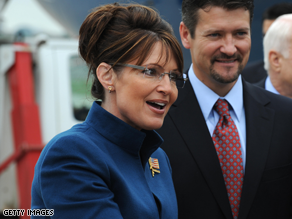 A new poll shows a gender gap when it comes to Palin.

A CNN/Opinion Research Corporation survey out Tuesday morning indicates that 62 percent of men questioned have a favorable opinion of the Alaska governor, nine points higher than women. In the poll, conducted Friday through Sunday "” entirely after then end of the Republican convention, 23 percent of men have an unfavorable view of John McCain's running mate, seven points lower than women.

Half of all respondents think Palin is qualified to serve as president, twenty points lower than Sen. Joe Biden of Delaware, the Democratic vice presidential nominee.

Is it fair to raise questions about her experience?

Overall, 50 percent of those polled say criticism of Palin is fair, with 45 percent saying it's only because she is a woman. In 1984, when Democratic Rep. Geraldine Ferraro of New York became the first woman running mate on a major party ticket, only 27 percent said such criticism was fair.

Overall, 57 percent of those polled had a favorable opinion of Palin, six points higher than Biden.

What would happen if Americans could cast two separate votes for president and vice president?

"Palin would win the second slot by a 53 to 44 percent margin, based largely on the votes of men," Holland said, adding that "in a hypothetical race with no running mates, Obama gets 49 percent and McCain gets 48 percent."

"In the real world, the McCain/Palin ticket and the Obama/Biden ticket are tied at 48 percent apiece, indicating that the running mates bring virtually no votes to the ticket by themselves," Holland also said.

The survey questioned 1,022 people and carries a margin of error of plus or minus three percentage points.

Why is this a surprise? The males that consider Palin "qualified" begin their analysis with a drooling "She's cute."

ChollyA1
Sarah Palin has extreme radical views (Pro-life, Pro-gun, her "God's will" stance on issues) that don't appeal to those angry Reagan Democrats and feminists that Republicans are desperately trying to capture but with the Republican base, she energizes, therefore the bigger poll numbers.

That one of the many reasons that she was selected to woo White men with her so-called "White pretty girl" looks and her preceived manly way that she handles her political views.

For White men, she reminds them of what they don't have and wish they had at home instead of what they opted for; traditionally trained, submissive & dependent White women versus an outspoken strong, good looking mom who can go hunting/fishing/drinking with the boys, handle her business at home (housewife, mom & freak) as well as on the job.

For White men, the perfect wife.

White men are not paying attention to what she is saying or what she believes/represents, but daydreaming about what she "can do", if you get what I'm saying.

And for those thrilled conservative White women, she becomes that "American Idol" they have been searching for. They want to be Sarah Palin.
9/9/0812:32 PM
❤️ 0

quote:
Originally posted by Cholly:
Sarah Palin has extreme radical views (Pro-life, Pro-gun, her "God's will" stance on issues) that don't appeal to those angry Reagan Democrats and feminists that Republicans are desperately trying to capture but with the Republican base, she energizes, therefore the bigger poll numbers.

Yeah, I really don't see it. But it can't simply be race. There are white women that I have found attractive.

sunnubianA1
I tried to keep an open mind when McCain announced her, but all the while, I got bad vibes from the first time I saw her face on t.v., and that fake high pitched voice of hers just gives me the creeps everytime I here it.

Since McCain announced her, it has now came out that she is a rutheless, vicious bitch, and a racist who referred Obama as "the sambo" in a public place (and I'm sure the statement IS true)---and just as I thought when I first layed eyes on her, she is what I instinctively sized her up to be. My feelings never lie.

I feel like this woman should not be trusted by ANYONE, really.

However, John McCain is the one that should be worried about Palin, not Obama, because should he actually win, I'll give Palin 3-6 months to have John and Cindy McCain riding through downtown Dallas in a convertible.
9/10/0810:30 PM
❤️ 0
Back To Top