The Mystery of Bee Colony Collapse 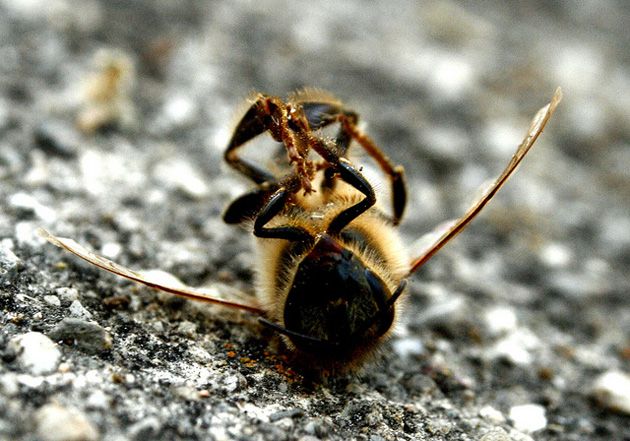 What's tipping honeybee populations into huge annual die-offs? For years, a growing body of evidence has pointed to a group of insecticides called neonicotinoids, widely used on corn, soy, and other US crops, as a possible cause of what has become known as colony collapse disorder (CCD).

Rather than kill bees directly like, say, Raid kills cockroaches, these pesticides are suspected of having what scientists call "sub-lethal effects"—that is, they make bees more vulnerable to other stressors, like poor nutrition and pathogens. In response to these concerns, the European Union recently  suspended most use for two years; the US Environmental Protection Agency, by contrast, still allows them pending more study.

But according to a new peer-reviewed paper, neonicotinoids aren't the only pesticides that might be undermining bee health. The study, published in PLOS One and co-authored by a team including US Department of Agriculture bee scientist Jeff Pettis and University of Maryland entomologist Dennis vanEngelsdorp, found that a pair of widely used fungicides are showing up prominently in bee pollen—and appear to be making bees significantly more likely to succumb to a fungal pathogen, called Nosema ceranae, that has been closely linked to CCD. The finding is notable, the authors state, because fungicides have so far been "typically seen as fairly safe for honey bees."

To analyze what exactly bees are bringing into their habitats to feed their colonies under real-world conditions, the authors looked at bee hives that had been hired out to pollinate seven crops: almonds, apples, blueberries, cranberries, cucumbers, pumpkins, and watermelons. (It's common practice for large-scale growers to rent mobile honeybee hives from commercial beekeepers for pollination purposes.)

They took pollen samples from the hives and tested them for pesticides—a category that includes chemicals that target insects (insecticides), funguses (fungicides), and weeds (herbicides). The researchers found insecticides and fungicides in every hive, and herbicides in nearly a quarter. Putting aside the bees' health for a moment, one way to read the results is as a survey of what farmers are spraying on some of the main fruit and vegetable crops we eat. Looking at it that way, it's alarming that organophosphates—an insecticide class known to be a powerful neurotoxin—were found in 63.2 percent of the hives. Another nasty pesticide class, pyrethroids, showed up in every sample.

But it was the fungicides that caused the most concern in the second part of the experiment. The researchers took disease-free bees, divided them into groups, and subjected them to three kinds of diets: two control diets free of insecticides traces, and one featuring samples of pollen collected from each of the field sites. Then they exposed them all to Nosema spores, and examined which bees became infected, and which managed to fight it off.

They then analyzed the data based on how much of each pesticide was in the pollen samples from the field. The result: The more fungicide in the pollen, the more likely the bees were to come down with Nosema. Overall, study co-author vanEngelsdorp told me in a phone interview, bees fed with fungicide-laced pollen were "two times more likely to come down with an infection" than control bees. One particular fungicide, pyraclostrobin, was found to make bees three times as susceptible to Nosema.

Why would fungicides do that? The mechanism remains unclear, vanEngelsdorp says—the study didn't look at causes. The chemicals could be hurting bees' digestive system, he said, causing "abrasions and allowing easier infection" or killing beneficial gut microbes and providing a niche for Nosema.

Interestingly, the other set of chemicals that had a similar effect were miticides—chemicals applied to hives by beekeepers in an attempt to control yet another threat, the Varroa mite. In waging chemical warfare on behalf of bees to control mites, beekeepers appear to be unwittingly helping another menace, Nosema, gain a foothold.

What about neonicotinoids, that common pesticide family? The study found it in pollen drawn from only one crop: apples. And they found a surprising result: Bees exposed to neonic-laced pollen showed a reduced tendency to come down with Nosema. The result doesn't exonerate neonicotinoids from the charge that it plays a role in CCD, because "we also know that apple pollen is really good for bees," vanEngelsdorp said, and "there was no way of separating the nutritional value of the pollen from the neonics" since they were in the same sample. He added that when "bees have access to really nutritious food sources, we know that's it's more likely that they're able to fight negative effects from pesticides." Moreover, the current study looked only at pesticides' interaction with Nosema. Neonicotinoids have been shown to have other effects on bees at very low levels—including, according to British researchers in a recent Nature paper, impeding their ability to forage.

The research group was surprised to find such little exposure to neonicotinoids compared to other chemicals. "Neonics get a lot of attention and lot of research dollars and no doubt play a role [in CCD], but our research shows we need to be looking more broadly at the pesticides bees are exposed to," vanEngelsdorp said. "There are a lot of other [chemical] exposures going on that may have just as much, if not more, real effects on colony health."

Meanwhile, use of fungicides on US farms is rising rapidly, according to a February report in the journal Environmental Health News. While the pesticide industry doesn't release use data, the market research firm Lucintel recently estimated that the global fungicide market will increase at an annual compounded rate of 6.7 percent over the next five years. "North America witnessed the highest growth during the last five years and is expected to lead the industry during 2012 to 2017," Lucintel added. The pesticide industry markets fungicides to farmers as cheap way to boost crop yields, but a 2011 study by researchers from Iowa State, Ohio State, and other Midwestern universities found those claims dubious in the case of corn, the nation's most-planted crop.

The Swiss chemical giant Syngenta, which has come under fire as a major supplier of neonicotinoid pesticides, is also one of the largest US suppliers of chlorothalonil, one of the two fungicides identified in the PLOS One study.

The other fungicide named in the study, pyraclostrobin, is marketed in the US by the German chemical titan BASF. Its marketing materials make impressive claims for a fungicide product called Headline, which contains the potentially bee-impeding chemical:

Headline fungicide helps growers control diseases and improve overall Plant Health. That means potentially higher yields, better ROI and, ultimately, better profits. And that means more than just money in the bank. It can help secure a family's future, fund a college education, finance an equipment upgrade, or maybe buy just a bit more of a vacation for the whole family. Perhaps that's whyHeadline is the nation's leading fungicide.

And now science suggests it may also mean something very bad for bees.

This is the annoying thing about chemicals.

They cannot possibly test the all of the chemical combinations that will occur when they throw all of this stuff into the environment.  Some combinations will inevitably have disastrous results.

Sign In To Reply
Post
Manage Topic
"The circumstance leaves me only waiting" RRSOTD Weekend Jam...Enjoy!
16 hours ago

"Hey baby, let me stay. I don't care what your friend's about to say." RRSOTD
16 hours ago

Unfit for the Altar: Black Women Make Their Own Marital Rules
17 hours ago