Searching for the Queen of Sheba 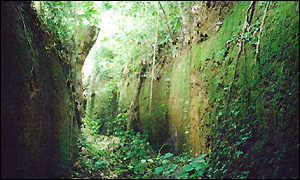 The Eredo ramparts: More earth than the pyramids

A team of British scientists may have rediscovered the centre of one of Africa's greatest kingdoms - and the possible burial place of the legendary Queen of Sheba.


Dr Patrick Darling: "The locals believe the legend - and that's what's important"
Hidden in the Nigerian rainforest, the earthworks at Eredo are just a few hour's drive from Lagos.

The team from Bournemouth University, working with archaeologist Dr Patrick Darling, have completed a preliminary survey of the wall and ditch measuring 70ft high in places and around 100 miles long.

While not approaching the complexity of a project like the pyramids in Egypt, the builders would have shifted an estimated 3.5 million cubic metres of earth during construction of the ramparts.

This is one million cubic metres more than the amount of rock and earth used in the Great Pyramid at Giza.

The wall marks out what the believed boundary of the original Ijebu kingdom, ruled by the 'Awujale' spiritual leader.

Civil wars and the arrival of the British eventually broke the kingdom's centuries-old Lagos lagoon trade monopoly.
But the Awujale of the modern day town of Ijebu-Ode still holds a traditional position of responsibility.

Dr Darling, described the Eredo site as a breathtaking find with many of its remains relatively intact, though overgrown by the rainforest. 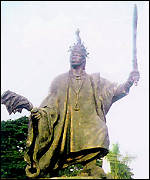 The Awujale: Link to Sheba?

"We are not linking what we found to a city, but to a vast kingdom boundary rampart," he told the BBC.

"The vertical sided ditches go around the area for 100 miles and it is more than 1,000 years old.

"That makes it the earliest proof of an kingdom founded in the African rainforest."

But more intriguing still is the suggested link to the Queen of Sheba, one of the world's oldest love stories.


According to the Old Testament, the Queen, ruler of Saba, sent a camel train of gold and ivory to King Solomon.

Solomon wooed and married the queen after she became overwhelmed by the splendour of his palace and their son began a dynasty of rulers in Ethiopia.

The Bible dates the queen's reign to the tenth century BC and modern scholars have speculated that a link between Judea and an ancient African queen led to the emergence of Judaism in Ethiopia.

In a tale closely linked to that in the Bible, the Koran describes the Queen as a sun worshipper based in the Arabian peninsula who was converted to Islam.

Arabian legend names the queen "Bilqis" and links her to the incense trade which was then a source of great regional power.


But 500-year-old Portuguese documents hint at the power of an Ijebu kingdom and build the case for Sheba being on the other side of the continent.

Local people near to the Eredo monuments link the area to Bilikisu Sungbo, another name for Sheba, said Dr Darling.

Local tradition speaks of a great queen building a vast monument of remembrance and there is an annual pilgrimage to what is believed to be her grave.

The region's long history of gold and ivory trade and the cultural importance of eunuchs linked to royal households further support the Sheba link.


"I don't want to overplay the Sheba theory, but it cannot be discounted," said Dr Darling.

"The local people believe it and that's what is important.

"Hundreds or thousands of pilgrims come to this area every year to honour what could be her grave, a magical shrine grove under tall trees.

"She's very much a real figure to local people. She is associated with the earlier figure of Bilikiso Sungbo, but I think the traditional figure was a powerful matriarch.

"The most cogent argument against it at the moment is the dating."

Dr Darling, a member of the African Legacy educational organisation which is working with the Nigerian Government, said that Eredo could become Nigeria's first world heritage site, joining monuments like Stonehenge in the UK and the pyramids of Egypt.

He said Eredo had remained hidden to the outside world because of the lack of scientific and archaeological research in west Africa.

"What is exciting about this for me is that we are beginning to bring out the tremendous political and cultural achievements of black Africa," he said.

'Queen of Sheba' wall is no fake

Scientists in Nigeria have authenticated an ancient wall near Lagos, but are playing down the possibility that it marked the boundary of the kingdom of the legendary Queen of Sheba.
A team of Nigerian and British archaeologists say the wall, which could be more than 1,000 years old, is genuine and not a modern construction.

Nigerian expert Levi Izuakor confirmed the wall was evidence of a great ancient city, but that little more than that could be said about its origins at this time.


The find had prompted suggestions that the centre of one of Africa's greatest kingdoms - and the final resting place of the Queen of Sheba - had been discovered.

But experts say the dating of the wall could eventually place its construction many hundreds of years after the lifetime of the Old Testament figure.

The wall lies hidden in the Nigerian rainforest at a site called Eredo, just a few hour's drive from the capital, Lagos.

They consist of a wall and ditch measuring 70ft (20 metres) high in places and approximately 100 miles (150km) long.

While not approaching the complexity of a project like the pyramids in Egypt, the builders would have shifted an estimated 3.5 million cubic metres of earth during construction of the ramparts.

This is one million cubic metres more than the amount of rock and earth used in the Great Pyramid at Giza.

Archaeologists believe it marks out what is believed to be the boundary of the Ijebu kingdom, ruled by the 'Awujale' spiritual leader.


The British eventually broke the Ijebu trade monopoly, leading to the decline of the kingdom.

However, the traditional position of Awujale still exists in the modern day town of Ijebu-Ode.

Dr Darling says the Eredo site is a particularly exciting discovery because it provides the "earliest proof of a kingdom founded in the African rainforest".

People living nearby the Eredo monuments link the area to Bilikisu Sungbo, another name for Sheba, says Dr Darling.

Local tradition speaks of a great queen building a vast monument of remembrance, and there is an annual pilgrimage to what is believed to be her grave.

But scholars trace the legend of the Queen of Sheba to an Old Testament story, describing how the queen married Solomon and their son began a dynasty of rulers in Ethiopia.

Estimates suggest the Old Testament queen would have reigned in the 10th century BC - some 2,000 years before the Eredo wall is believed to have been built.

Dr Darling says the beliefs of the locals cannot be discounted.

"I don't want to overplay the Sheba theory, but ... the local people believe it and that's what is important."

He believes that, whatever the case, Eredo could become Nigeria's first world heritage site, joining monuments like Stonehenge in the UK and the pyramids of Egypt.
12/7/044:11 PM
❤️ 0

Oshun AusetA1
It irritates me that it is being linked to the Queen of Sheba...like the Queen of Sheba is the only African Queen that can exist...when it is obviousely a completely different kingdom altogether...but I guess we always must validate ours ancestors accomplishments by connecting everything to the Bible ....Like we can't do anything outside of it that is "great" or "good" .... But I understand we are colonized ... anyhow ... Another megalithic structure in Africa for Eurocentric scholars to try to write out of history...It was found quite a while ago...haven't heard much in the mainstream media since this article that was published in May of 1999...Wonder why?... PBS, Discovery, National Geographic, History Channel, CNN...What happened?...like we don't already know.
12/8/047:38 AM
❤️ 0

FagunwaA1
Si Alafia Ni OA?
Having just returned from my homeland I can tell you that among the enlightened folks this story and the turn the brits have put on the wall is the genesis for many jokes. The brits have a real sick thing for making everything that has anything to do with Traditional worship forms relate to judeo-christian ethos.
If it were not for the serious problems in Nigeria at this time this would be a bigger story. The in-roads being made into the traditional culture buy these pentacostal demons have trumped anything done by the islamist and the brits combined. The corruption is a sight to behold. With all of that it is still the most beautiful place in the world.
12/10/0410:18 AM
❤️ 0
Back To Top