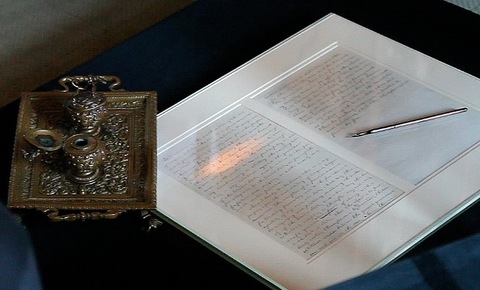 Photo of Emancipation Proclamation, along with the ink well used by President Lincoln to draft the document. Courtesy of the Smithsonian.

President Lincoln signed the Emancipation Proclamation on Jan. 1, 1863, declaring all slaves in rebellion states as free and inviting them to join the Union forces fighting in the Civil War. The declaration paved the way for Congress to approve the 13th Amendment to the Constitution, outlawing slavery in the United States.

The original and extremely fragile document (there are 48 other authorized copies) is available for the public to view only a few days a year. Those in Washington, D.C., can bring in the New Year at a late-night showing of this piece of American history, and celebrate the 150th anniversary of its signing.

Watch a video of how curators preserved the document:

For more photos of the Emancipation Proclamation, see the National Archives website.

Read the full text of the Emancipation Proclamation below, and find out more about the official events to celebrate the 150th anniversary, which begin this weekend:

By the President of the United States of America:

Whereas, on the twenty-second day of September, in the year of our Lord one thousand eight hundred and sixty-two, a proclamation was issued by the President of the United States, containing, among other things, the following, to wit:

"That on the first day of January, in the year of our Lord one thousand eight hundred and sixty-three, all persons held as slaves within any State or designated part of a State, the people whereof shall then be in rebellion against the United States, shall be then, thenceforward, and forever free; and the Executive Government of the United States, including the military and naval authority thereof, will recognize and maintain the freedom of such persons, and will do no act or acts to repress such persons, or any of them, in any efforts they may make for their actual freedom.

Arkansas, Texas, Louisiana, (except the Parishes of St. Bernard, Plaquemines, Jefferson, St. John, St. Charles, St. James Ascension, Assumption, Terrebonne, Lafourche, St. Mary, St. Martin, and Orleans, including the City of New Orleans) Mississippi, Alabama, Florida, Georgia, South Carolina, North Carolina, and Virginia, (except the forty-eight counties designated as West Virginia, and also the counties of Berkley, Accomac, Northampton, Elizabeth City, York, Princess Ann, and Norfolk, including the cities of Norfolk and Portsmouth[)], and which excepted parts, are for the present, left precisely as if this proclamation were not issued.

And by virtue of the power, and for the purpose aforesaid, I do order and declare that all persons held as slaves within said designated States, and parts of States, are, and henceforward shall be free; and that the Executive government of the United States, including the military and naval authorities thereof, will recognize and maintain the freedom of said persons.

And I hereby enjoin upon the people so declared to be free to abstain from all violence, unless in necessary self-defence; and I recommend to them that, in all cases when allowed, they labor faithfully for reasonable wages.

And I further declare and make known, that such persons of suitable condition, will be received into the armed service of the United States to garrison forts, positions, stations, and other places, and to man vessels of all sorts in said service.

And upon this act, sincerely believed to be an act of justice, warranted by the Constitution, upon military necessity, I invoke the considerate judgment of mankind, and the gracious favor of Almighty God.

In witness whereof, I have hereunto set my hand and caused the seal of the United States to be affixed.

Done at the City of Washington, this first day of January, in the year of our Lord one thousand eight hundred and sixty three, and of the Independence of the United States of America the eighty-seventh.

By the President: ABRAHAM LINCOLN

Get copy of Emancipation Proclamation in PDF at:

Wow!!!!!  How "lucky" are we to have this documented evidence of our freedom?  I say this cuz on this day there are so many of us STILL in human slavery in Africa and in MANY parts of the middle east.  Still!!!!!  So for me, our journey for TOTAL freedom of all our African peoples continues.  We must take this opportunity to ensure FREEDOM for ALL Africans-including the ones enslaved by their own PEOPLE!!!  They are BRAINWASHED unfortunately.  And as we know, this form of slave mentality is hard to break.  Thus far it has been circulating in existence for Africans in particular for over 1500 years where folks are still under the impression that having human bondage is their entitlement in their closed-mind backwards in thinking unevolved society.

Today in this high technology period of human life, we are still strugglin to END all slave behavior:  sex slaves, human traffiking[sp], child brides, child soldiers, consanginity[sp]-all a BRAND of some form of slavery.  Folks have justified this practice by using or pointing toward religious documents that THEY WROTE mind you...not anything written in the skies for all to see.  Now if what is said by these folks are TRUE, then why hasn't the so-called GOD come down and set the record STRAIGHT in terms of our alliance to "him?"  Since there has been total silence on his part for at least two thousand years, I QUESTION the perspective of an avenging[sp] God.

The only avengers has been 'MAN."

However it is merely the 5% who are FREE.  95% of the descendents of African slaves are still struggling for their identity and rightful freedom.  And although we are blessed to have our freedom[fought for in the blood, sweat and death of our ancestors], we as a people are NOT finished thriving for freedom as long as there are still those of us in human bondage else where in the world.  We have to step up our game since global eyes are on us in terms of our outstanding ability to free ourselves in such a "small group."  The larger group however is still shackled in centuries old justification of human worth by human MONSTERS.  We need to take our heads from under the blanklet of fear and face this monster of darkness HEAD ON....or there will NEVER be the light of freedom for US all.  Just won't.   It is TIME to pass this freedom torch to EVERYONE who is enslaved currently.  It has proven to work for us...therefore it can WORK for them.   1500 years of present  slavery verses 500 years of past slavery.  The numbers says it all.  This is how I see it anyway,  But!  As usual, I'm. Just. Sayin

Sign In To Reply
Post
I Can't Breathe': Man Dies After Minneapolis Police Officer Seen Kneeling On His Neck
10 hours ago

The Country is on fire...people have finally united against the system...RRSOTD
19 hours ago