Tax the super-rich or riots will rage in 2012

By Paul B. Farrell, MarketWatch 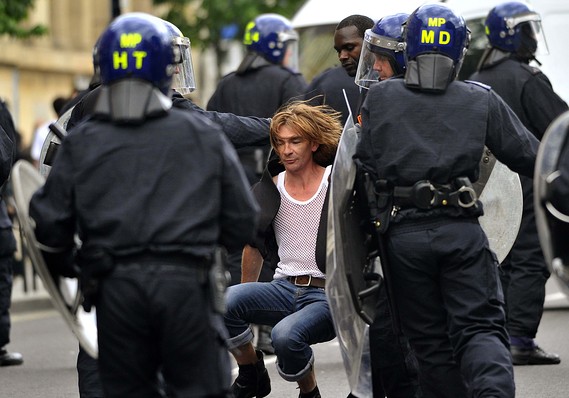 Reuters
Police officers in riot gear drag a man along a street in London Aug. 8, 2011.

SAN LUIS OBISPO, Calif. (MarketWatch) — What a year. Rage in London, Egypt, Athens, Damascus. All real. Just a metaphor in the new “Planet of the Apes” film? No, much more. Warning: More rage is dead ahead. Across our planet a new generation is filled with rage. High unemployment. Raging inflation. Dreams lost. Hope gone. While the super -rich get richer and richer.

Listen to that hissing: The fuse is rapidly burning, warning us. Wake up before the rage explodes in your face. This firestorm is endangering America’s future. From forces outside, yes. But far more deadly, from deep within our collective psyche. We have lost our moral compass. We are self-destructing. 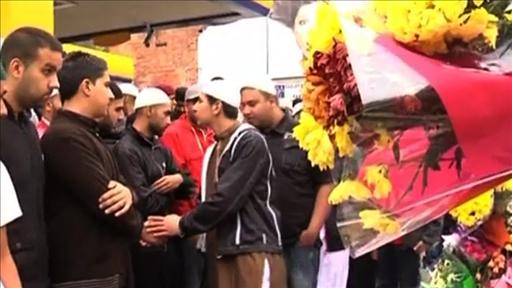 Asian communities across the U.K. come together to pay homage to three men killed in the rioting. Video courtesy of Reuters.

Crackpot warning? No. This warning comes from the elite International Monetary Fund. A recent IMF report looked at “the causes of the two major U.S. economic crises over the past 100 years, the Great Depression of 1929 and the Great Recession of 2007,” writes Rana Foroohar, an economics editor at Time magazine.

“There are two remarkable similarities in the eras that preceded these crises. Both saw a sharp increase in income inequality and household-debt-to-income ratios.” And in each case, “as the poor and middle-class were squeezed, they tried to cope by borrowing to maintain their standard of living.”

But the rich “got richer, by lending, and looked for more places to invest, bidding up securities that eventually exploded in everyone’s face. In both eras, financial deregulation and loose monetary policies played roles in creating the bubble. But inequality itself — and the political pressure not to reverse it, but to hide it — was a crucial factor in the meltdown. The shrinking middle isn’t a symptom of the downturn. It’s the source of it.” Today the consequences of the meltdown still haunt us — there’s more to come.

There’s a new bubble blowing. No one can stop it ... soon it will explode.

Get it? There’s enormous “political pressure not to reverse” inequality till it “explodes in our faces.” We deny the inequality between rich and the other 99%. The rich are addicts. More is never enough. They thrive on greed, blind to the needs of others. Worse, they have no commitment to America as a nation. From Forbes billionaires and signers of “no new taxes” pledges, to Mitch McConnell’s un-American willingness to sabotage the economy to deliver on his main promise to make Obama a one-term president. Read about Obama’s support of Warren Buffett’s call to tax the rich.

Yes folks, the new “Rise of the Planet of the Apes” film delivers a powerful warning paralleling the IMF red flags. Listen to reviewer Zaki Hasan in HuffPost. Here’s the scenario. What’s ahead for America as the inequality gap gets bigger, the job market stagnates, inflation rages, a double-dip recession nears. Hasan’s vision goes beyond metaphor. We see a psychological profile of America as an addict lost in an addiction. And like all addicts, we cannot see, nor stop, our self-destructive behavior:

“The Apes series has always been about self-inflicted wounds — the idea that man’s unquenchable hubris inevitably leads to catastrophic consequences both for himself and those around him, whether manifested through cruelty to animals or cruelty to himself.”

In the new film, our world is facing “the twin threats” of genetic engineering and a super-virus. But the central theme remains: “Man’s downfall comes as a result of his own actions.”

The original “Planet of the Apes” went deeper, speaking more to America’s fatally flawed mind: “Beware the beast Man, for he is the Devil’s pawn.” In this early scene, Dr. Cornelius, the anthropologist, an orangutan, is reading aloud from the ancient sacred scrolls of the Apes: “Alone among God’s primates, he kills for sport or lust or greed.” Yes, that reminds us of Goldman’s war to dominate the great Wall Street jungle.

He keeps reading from the scrolls: “Yea, he will murder his brother to possess his brother’s land. Let him not breed in great numbers, for he will make a desert of his home and yours. Shun him; drive him back into his jungle lair, for he is the harbinger of death.”

Yes, evolution is reversing. Here a prophecy comes true. The Apes knew our brains were saboteurs, destroying our rightful place at the top of the jungle’s food chain: “Man is a nuisance. He eats up his food supply in the forest, then migrates to our green belts and ravages our crops. The sooner he is exterminated, the better.”

Warning: The rage is sweeping London, Damascus, Tripoli, the spreading Sahara desert. Is America next?

Tax the super-rich, or revolution will overrun America next

Yes, tax the super-rich. Tax them now, before the other 99% rise up, trigger a new American Revolution, another meltdown, a new Great Depression. Historically, revolutions build over long periods, bubbles growing to critical mass. Then, “something happens.” Suddenly. Unpredictably. A flashpoint triggers ignition. Nobody saw it coming in Egypt. A suicide in a remote village uploaded on a young Google executive’s Facebook page. Goes viral, raging out of control. Cannot be stopped. So think hard about these six warnings blowing a new mega-bubble that will soon explode in our collective faces:

An earlier special report in Time, “Poor vs. Rich: A New Global Conflict,” warns that a “conflict between two worlds — one rich, one poor — is developing, and the battlefield is the globe itself.”

Just 25 developed nations with 750 million citizens “consume most of the world’s resources … enjoy history’s highest standard of living.” But now they face 100 poor nations with 2 billion people, many living in poverty, all demanding “an ever larger share of that wealth.” A British leader calls this a “time bomb for the human race.”

In a New York Times column, Matthew Klein, a 24-year-old Council on Foreign Relations researcher, saw the parallel between the 25% unemployment among Egypt’s young and the 21% for young Americans: “The young will bear the brunt of the pain” as governments rebalance budgets. “Taxes on workers will be raised, spending on education will be cut while mortgage subsidies and entitlements for the elderly are untouchable.” And more tax cuts for the rich.

3. Warning: Rich get richer on commodity inflation, poor get angrier

USAToday’s John Waggoner warned: “Soaring food prices send millions into poverty, hunger.” The “rise in food prices means a descent into extreme poverty and hunger, warns the World Bank.” One Pimco manager warns that commodity inflation exposes “the underlying inequalities and issues related to the standard of living that boil beneath the surface.”

4. Warning: The super-rich are blinded by their addiction to money

In “Free Lunch: How the Wealthiest American Enrich Themselves at Government Expense (And Stick You with the Bill),” David Cay Johnston warns that the rich are like addicts, and to “the addicted, money is like cocaine, too much is never enough.” Recent data: 300,000 Americans in “the top tenth of 1% of income had nearly as much income as all 150 million Americans who make up the economic lower half of our population.”

5. Warning: Politicians are corrupted by this super-rich addiction to greed

In “Washington’s Suicide Pact,” Newsweek’s Ezra Klein warns: “Congress is careening toward the worst of all worlds: massive job losses and an exploding deficit.” And the debt-ceiling drama just made things a lot worse. Millions of jobs were lost during Bush years, his wars, tax cuts for the rich. Yet, today the GOP is in total denial of that legacy, blinded by an obsession to destroy Obama’s presidency, no matter the consequences.

Yes, we are ripe for a surprise revolution. In “Third World America” Arianna Huffington warns: “Washington rushed to the rescue of Wall Street but forgot about Main Street.” Now Bernanke’s promise of cheap money through 2013 is just one more “free lunch” to the richest 1%. Meanwhile, “one in five Americans unemployed or underemployed. One in nine families unable to make the minimum payment on their credit cards. One in eight mortgages in default or foreclosure. One in eight Americans on food stamps. Upward mobility has always been at the center of the American Dream … that promise has been broken… The American Dream is becoming a nightmare.”

Wake up folks. Super-rich addicts are destroying the American Dream for everyone. They’re destroying the American economy. They don’t care about you. Yes, they hear the ticking time bomb. They’re stockpiling cash. Don’t say you weren’t warned. The IMF sees a new collapse sweeping across the planet. Open your eyes. You’re not watching a film. This is not a metaphor. Plan now for the revolution, class warfare, market crash, economic collapse, plan for another depression.

Articles like this have been appearing for some time in financial news publications.  The framing of these civil outburst are attempts to dismiss the reality of what's happening.  Meanwhile, rich people know this history.
8/16/116:40 PM
❤️ 0
Original Post

Sign In To Reply
Post
To the uprisers in Minneapolis that are ripping the city down to bring attention to police tyranny...let it burn RRSOTD
37 minutes ago

I Can't Breathe': Man Dies After Minneapolis Police Officer Seen Kneeling On His Neck
47 minutes ago

Educated Black Women Think They Are Better Than Blue Collar Men.
16 hours ago

Corona Virus: The Truth
24 hours ago