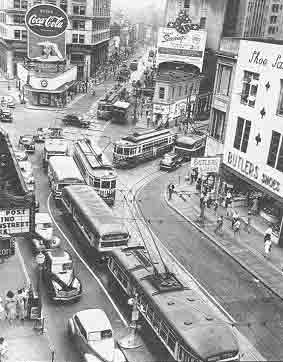 Prolog More financial institutions, professionals, educators, entertainers and politicians were on this one mile of street than any other African American street in theSouth. The street was "paved in gold" observed John Wesley Dobbs. Today the buildings on Auburn Avenue honor the determination and tenacity of Black Americans operating within the confines of extreme social and economic segregation between 1880 and 1965 to create a thriving community and six centers of higher education adjacent to this street.

The fully institutionalized racial intolerance represented by the inner ring around all these pages (if you don't see this you need (1) Flash 6.0 and (2) Shockwave 8.5 plug-ins) is a poignant reminder that racial discrimination has happened before in human history, most recently African Americans, people of the Jewish faith, and American Indians, and will happen again unless we as civilized beings are ever watchful for where the feelings of a few shape an entire cultural outlook to the detriment of a minority group. The outer 'sky' ring represents constructive life forces in the form of events, organizations and people that arose consistently and patiently to overcome and finally overpower the cultural oppression of the inner ring.

Althougheconomically governed by the restrictive Jim Crow Laws, from the 1920's through the 1940's Sweet Auburn Avenue was at the height of its social vigor and the present day buildings reflect this energy. After this golden era, the west side of Atlanta around the Atlanta University Center became a more fashionable area to locate an African American business or residence. Desegregration in the 1960's furthered an exodus of people and energy from the area, leaving the street somewhat depopulated as it is today.

A passage from Where Peachtree Meets Sweet Auburn by Gary Pomerantz pages 123-124, describes Auburn Avenue between 1924 and 1938, through the viewpoint of "Mayor"John Wesley Dobbs (also called "The Grand"):
Dobbs believed there was magic in Auburn Avenue, especially in that two-block stretch between Piedmont Avenue and Butler Street (now Jesse Hill Street). When Blacks spoke of Auburn, that's what they meant: the churches, clubs, barbershops, shoeshines, small businesses, restaurants and banks between the Rucker Building and the Yates and Milton Drugstore. Once it had been called Wheat Street, but in 1893 white residents successfully petitioned the city council to change it to Auburn Avenue, convinced it had a more stylish sound. By the 1930s some called Auburn the "Black Peachtree," though, physically, that was a bit of a stretch since Peachtree wound north of the city and continued for many miles. In its entirety, Auburn Avenue ran little more than a mile and a half. Yet even as developer Hermon Perry triggered a housing boom for blacks on the west side, Auburn remained the spiritual center of black Atlanta. The three legged stool of black finance the Citizens Trust Bank (of which Dobbs was among the original directors), Mutual Federal Savings & Loan and Alonzo Herndon's Atlanta Life Insurance Company was located on Auburn. To walk the Avenue on any summer evening was to experience the vitality of black life in the city: the sounds of ragtime from the Top Hat, the smell of fried chicken from Ma Suttons and the constant hum of animated street chatter. It became the place for black dreamers. You knew you had arrived on the Avenue once you had your own pulpit or your own cornerstone. Henry Rucker, Alonzo Herndon and Benjamin J. Davis already had erected buildings on Auburn and soon Dobbs would have his.

"Sweet Auburn Avenue" is what the Grand began to call it, in honor of the timeless Oliver Goldsmith poem from 1770, "The Deserted Village.

Moneymade the Avenue sweet, Dobbs said, and through voter registration he would make it even sweeter.

The Following is text from the audio narration Will The Circle Be Unbroken?
NARRATOR: Segregated by Jim Crow laws, Atlanta's black population developed a network of independent businesses, churches, and community institutions, including a remarkable cluster of five black collegesaround Atlanta University. Former Atlanta mayor, Maynard Jackson...
MAYNARD JACKSON: Where else have you had since 1865 a pouring into a city of trained black humanity, influenced by positive principles and values, like you've had here in Atlanta? They come from all over the world, all over the USA, and all over the world.
Literally. It's almost like you can see a great hand reaching down and lifting Atlanta up, because of these colleges.
That made life a lot more bearable. It literally was a wheel within a wheel, a world within a world. Blacks could not go out to many white things, but whites came onto these campuses.
NARRATOR: While the colleges gave black Atlanta intellectual freedom, Auburn Avenue, the community's commercial hub, provided jobs dependent on black consumers, not white bosses. Together, commerce, schools, and churches forged a strong middle class in the black community. Bill Calloway--a pioneer in the insurance industry...
W. L. CALLOWAY: Auburn Avenue was considered the almost nucleus so far as black businesses throughout America was concerned. It had more financial institutions than any other city.
NARRATOR: NAACP leader, Jondelle Johnson...
JONDELLE JOHNSON: Atlanta was a business Mecca. We had everything here that anybody just about had white. We had every kind of business, every kind of store, I'm talking about first class.
W. L. CALLOWAY: And that's why John Wesley Dobbs, coined the phrase "Sweet Auburn" Avenue because it said it was more sugar in that one block than in anywhere else in America. More concentration of financing.