John Kerry Did It 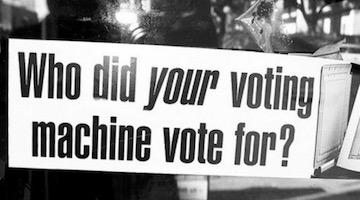 John Kerry Did It

The “it” being: put Republicans in power by allowing George Bush to steal the presidency for the second time, in 2004, with no assistance from Russians, Wikileaks or Jill Stein.

“Greens did it, Russia did it, Wikileaks did it, and we’re all going to do it again.”

The Democratic National Committee’s scapegoating began early in 2016, months before pussy grabbing, wall building, climate change denying, health care abolishing, tax dodging, shit spewing demagogue Donald Trump surprised everyone including himself by taking the White House. First Wikileaks elected Trump by releasing 19,252 DNC emails plus attachments on the eve of the Democratic Party Convention. Then Russia did it. Russia helped Wikileaks do it. Then Jill Stein and the Green Party did it. They all did it together.

Of course the Green Party does it every presidential election year, but in 2016, we doubled down to elect the most fearsome Republican Godzilla yet. (Because he shares our core values: ecological wisdom, social justice, grassroots democracy, and nonviolence.) Jill Stein even had her picture taken during her citizen diplomacy trip to Russia, just as Vlad the Impaler had stopped by her banquet table.

And now, according to Hillary Clinton, the Green Party is scheming to do it again by grooming Hawaii’s Democratic House Rep. Tulsi Gabbard, author of the stillborn Stop Arming Terrorists Act , to accept the Green Party presidential nomination—but only if Jill Stein, our dastardly 2012 and 2016 candidate, stands down. We did it, Russia did it, Wikileaks did it, and we’re all going to do it again. Wikileaks is still afloat on the Internet even as its founder Julian Assange is tortured in Belmarsh Prison, according  to  UN Special Rapporteur on Torture Nils Melsner .

One thing the DNC lynch mob and its corporate media would like us to forget is that one of their own, John Kerry, did it in 2004. The Greens couldn’t do it that year because our candidate, David Cobb, chose to campaign only in the “safe states” to avoid the opprobrium we’d been subjected to ever since Bush stole Florida and the Dems blamed our 2000 candidate, Ralph Nader.

Kerry knew that George Bush and the Republican Party stole the 2004 election from him in Ohio after his voters reported that their votes appeared as Bush votes even though they pulled the lever for Kerry, and after people in majority Democratic districts stood in long lines in thunderstorms and torrential rain waiting to vote (or went home) while majority district Republicans voted easily. Kerry’s patrician memoir “Every Day Is Extra” includes this comic description of another concern:

“Some on the team were bothered by the fact that many voting machines came from a private company, Diebold, owned by two Nebraska brothers who were the chairs of the Bush campaign for president.

“I wonder how many countries have elections in which the machines are privately owned and controlled, where the coding for the tallying cannot be inspected or verified because it is ‘proprietary information.'”

“Many voting machines came from a private company, Diebold, owned by two chairs of the Bush campaign.”

Kerry also wrote that he anticipated fraud but hoped for such a clear outcome that he wouldn’t need to contest. When that bubble burst he chose not to expose the rot at the core of our so-called democracy, although, of course, he didn’t put it that way.

As soon as he and his team realized Bush had stolen it again, he wrote, they went into deep deliberations about what to do. His vice presidential candidate, John Edwards, thought they should contest, but both knew that they might win their way past several appeals courts only to lose in the Supreme Court, as Al Gore had.

Why not tell Americans, and the rest of the world, the truth?

Because, Kerry wrote, he was “deeply concerned about a nation at war, with the world looking at us, coming out of a second consecutive election, where we would be sitting in limbo, wondering for the next six weeks or more who the president would be.”

But why should anyone have been surprised by that? In 2003, John Kerry had voted to authorize the invasion of Iraq, and during his campaign, he stood by his vote. Discussing national security, he said:

“ . . . we must launch and lead a new era of alliances for the post-9/11 world. America must always be the world's paramount military power. But we can magnify our power through alliances.”

Nevertheless, people were surprised and aghast. Kerry wasn’t as crude as Bush. He wasn’t so obviously sadistic and sociopathic, so many had somehow imagined that his election would end the horrors we were inflicting on the Iraqi people and the soldiers coming home in coffins or physically and psychically mangled for life. On election eve, November 2, I had gone to see some political theater where everyone was eager to learn that the nightmare was over. Then we exited the theater space to a reception area with televisions mounted on the walls and learned that it wasn’t.

“Many had somehow imagined that Kerry’s election would end the horrors we were inflicting on the Iraqi people.”

The next morning George Bush told a press conference that he had earned a lot of political capital, and he was going to use it. Five days later, on November 7, the Second Siege of Fallujah began. I stayed up much of the night listening to the BBC’s on-the-ground reporters. One described women and children trudging out of Fallujah before the battle began until some of the women turned around and ran back to shoulder surface-to-air missiles alongside their men. Then the bombs came thundering down and innocent Iraqis were blown to bits. I wondered how many bodies would even be identifiable.

Everyone of good conscience was horrified by the Iraq War, but why did anyone think John Kerry might end it? Bill Clinton took office in 1993, two years after the Soviet Union collapsed, when some of us still hoped for a peace dividend that would turn swords into ploughshares, but he never delivered. During his eight years in the White House, he:

caused hundreds of thousands of deaths by imposing brutal sanctions on Iraq;

bombed a pharmaceutical factory in Sudan;

bombed Iraq to distract from his impeachment for sordid sexual behavior with an 18-yr.-old White House intern;

and oversaw covert operations that left millions dead in Rwanda and the Democratic Republic of the Congo, as mining moguls from Hope, Arkansas and beyond moved in.

(Then and now, most Americans understand Congo’s ongoing agony as “ethnic conflict” if they give it any thought at all.)

Some may have also remembered John Kerry as the young veteran who campaigned passionately against the Vietnam War and even testified to Congress about its ills. But those days were long gone, and his memoir suggests that he used widespread opposition to the war as a springboard for his political career.

“No safe scapegoats in sight.”

John Kerry wouldn’t have stopped the war, and in the end, he decided not even to let Americans know that the presidency had been stolen again, and not by the Greens. We hadn’t even campaigned in the swing state of Ohio. There were no safe scapegoats in sight and, in John Kerry’s mind, the United States’ national prestige in the world was at stake. How could he justify his claim that “America must always be the world's paramount military power” if we couldn’t even hold an honest presidential election?  In his memoir he wrote:

“The decision was mine. I didn’t want to put the country through that again. It would be selfish and irresponsible. I knew some would be angry. People had a right to know that their votes were counted properly. They were correct to be incensed. But I decided I would continue that fight in a way that didn’t put our nation into banana republic status.”

It was already a bit late for that, but no one as richly rewarded by the status quo as John Kerry would want to risk rocking the boat till it ran aground or tipped over.

Ann Garrison is an independent journalist based in the San Francisco Bay Area. In 2014, she received the Victoire Ingabire Umuhoza Democracy and Peace Prize  for her reporting on conflict in the African Great Lakes region. She can be reached at ann@anngarrison.com.