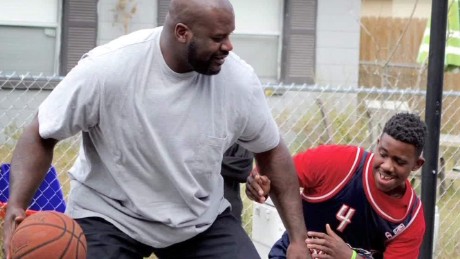 He showed up Saturday, this time with a full-court press. It included fellow officers and one especially large backup: 7-foot-1 Shaquille O'Neal of NBA fame.

White, a Gainesville Police Department officer, gained popularity when a video emerged showing his response to a noise complaint about youth playing basketball "too loudly."

In the police dashcam video posted online Thursday and watched 14 million times, White is seen pulling up at the neighborhood to address the noise complaint.

But instead of scolding the kids or breaking up the game, he joins them.

"We're going to let kids be kids. We are going to focus on the ones that commit crimes. #HoopsNotCrime," the police department said in the Facebook post accompanying the video.

After the game ended, White told the kids he'd return to shoot more hoops. He kept his promise Saturday.

"Told you I was gonna bring some backup, right? You guys ready?" he asked the kids.

"Look at these big guys I brought. You sure you can take them?"

O'Neal then emerged from an SUV to cheers, his large frame looming over the officers in uniform.

"Girleeee!" one young man exclaimed as the NBA legend walked toward the street court.

"Oh my God, you're huge!" another kid said as the former Miami Heat player leaned in for a hug.

O'Neal expressed interest in playing in the rematch after watching the video of the officer's response to the noise complaint, according to the police department.

"These kids will never forget the day Shaq rolled up to their house to play ball," the police department said. 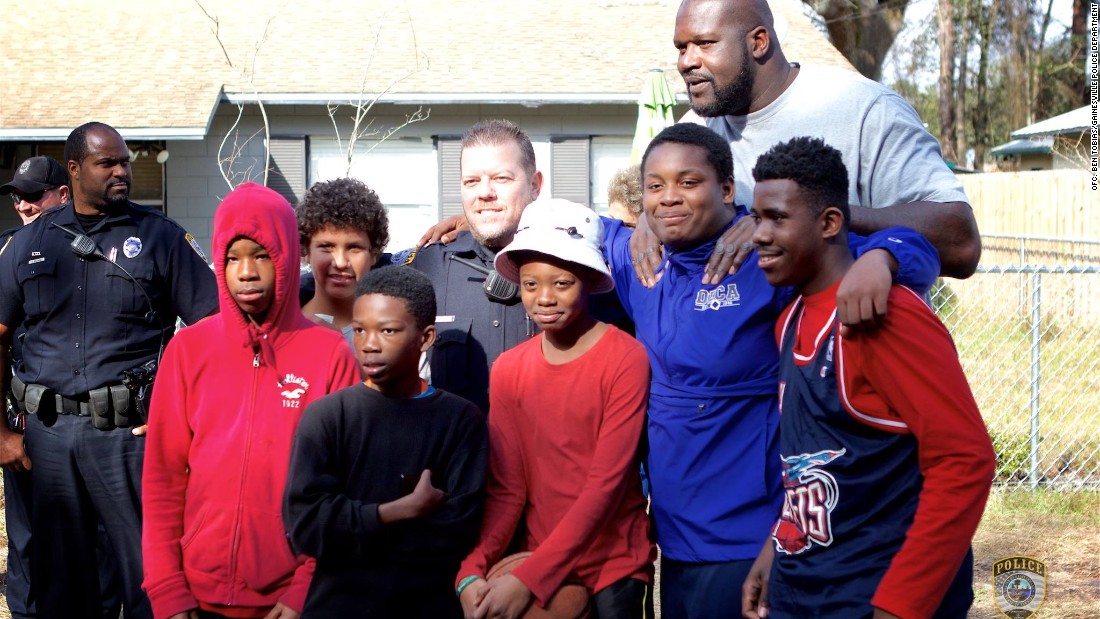 Shaquille O'Neal poses with a group of neighborhood kids in Gainesville, Florida.

O'Neal scored points with the kids on and off the field.

In addition to teaching them basketball tips, he doled out hugs and fist bumps, and urged them to follow their dreams.

That?  Was beautiful.  Working with kids I KNOW this touched their hearts and changed their lives and direction FOREVER.  This is the power of COMMON SENSE.  This officer USED common sense that caused an amazing thing to happen for these children.  Kudos to him.   If at least ONE officer uses this form of clarity during simple call like this?  Guess what would happen.

That was beautiful all the way round, from the officer actually handling a "noise" complaint without hate, evil, violence or someone's child winding up dead, to Shaq taking it upon himself to approach the police department to give this officer his due 'props', to both the officer and Shaq deciding to surprise the kids they way they did.

The entire community should always remember this officer; after how he handled this call [considering what is happening to so many Black youth encountering police in this country], both the law abiding and not so law abiding in that community should have his back in their community.

[Crowds should part anytime that officer or Shaq walks up for doing such a beautiful, selfless thing]

Sign In To Reply
Post
Manage Topic
That Lizzo video that everyone is talking about... let's discuss
21 hours ago

A frequently used beat, but an excellent original track!! RRSOTD
22 hours ago