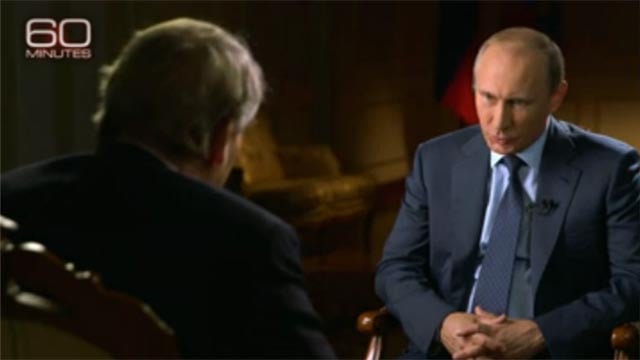 “Do you believe that everything is perfect now from the point of view of democracy in the United States? If everything was perfect there wouldn’t be the problem of Ferguson,” President Putin said. “There would be no abuse by the police. But, our task is to see all these problems and to respond properly.

In addition to discussing Ferguson, President Putin and Rose discussed a wide-range of topics during the '60 Minutes' interview.

Domestically and internationally, the US is perceived as morally unexceptional.

While nowhere as bad as N. Korea,the US population is seen as among the most brainwashed people on earth.

Domestically and internationally, the US is perceived as morally unexceptional.

While nowhere as bad as N. Korea,the US population is seen as among the most brainwashed people on earth.

Right-wing politicians and their puppet masters are working hard at getting Americans just as brainwashed, socially conditioned, subjugated and afraid, as the North Korean people.

Hey, you back, nice to see you!

Corona Virus: The Truth
17 hours ago

U.S. PPE SUPPLIES SENT TO CHINA BY TRUMP [AFTER] HE WAS TOLD ABOUT CORONA VIRUS
22 hours ago

Answer: Beacuse we are all under quarantine and you can't leave anyway!!!...RRSOTD
2 days ago

"Marriage is for ugly people"...A lil laughter at a sad time like this
2 days ago