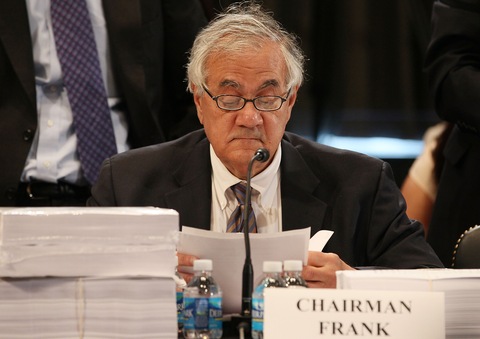 Frank revealed his intentions at an afternoon news conference in Newton, Mass.

"I will miss this job and I will have some twinges of regret ... but one of the advantages is I don't have to pretend to be nice to people I don't like," the famously acerbic congressman said about his departure.

Watch more of his news conference:

A vocal progressive and one of the first openly gay members of Congress, Frank championed numerous causes and bills during his tenure, including last year's effort to impose tough new restrictions on Wall Street.

As chairman of the House Financial Services Committee, Frank was instrumental in the passage of the Dodd-Frank Act, which included the stiffest regulations on banks and financial institutions since the Great Depression. It also expanded consumer protections designed to prevent another economic meltdown like the one that took place in the fall of 2008.

In 2010, Frank faced one of his toughest re-election campaigns as national conservative groups invested heavily against him. Frank eventually won his race over Republican Sean Bielat by 10 points.

The 71-year-old Frank was expected to face an even harder re-election campaign in 2012, as recent redistricting pushed more conservative towns into Massachusetts' 4th District.

Frank first took office in 1981 and served as chairman of the House Financial Services committee from 2007 to 2011.