Reconstruction Didn't Fail: It Was Murdered 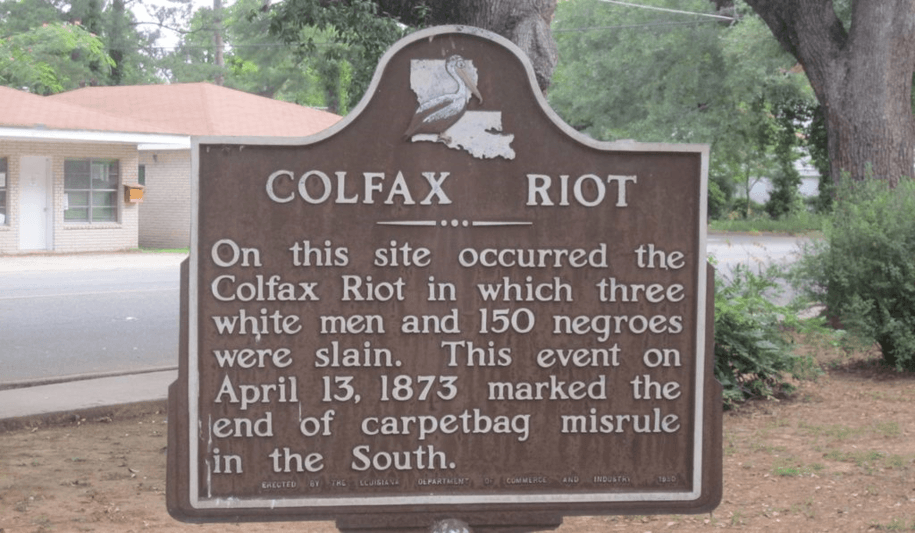 A detestable lie about the Colfax Massacre and the Reconstruction Era

“I don't know why black skin may not cover a true heart as well as a white one.”

In 1870, Hiram Revels became the first black Senator in American history. He represented Mississippi, the state that had sent Jefferson Davis to the Senate fewer than ten years earlier. Revels served honorably in the face of vicious racism by colleagues and the public. Yet, when Reconstruction ended, America wouldn’t have another black Senator until 1967.

Reconstruction was an ambitious project to rebuild the South into a free and multiracial society. For a century, white supremacists have slandered the era as one of chaos, misrule, and failure. Works like Birth of a Nation and Gone with the Wind have woven these fictions into our culture. However, without truly understanding Reconstruction, we cannot understand our America.

The Birth of Multiracial America

Reconstruction Era marked an unparalleled advance in civil rights. Within five years, the 13th Amendment freed blacks from bondage, the 14th Amendment made them citizens, and the 15th Amendment gave black men the vote.

Reconstruction policies were also remarkably effective at repairing the devastation of the Civil War. The largest infrastructure projects until the New Deal helped bring the South into the modern age. States increased spending on public schools and guaranteed education for all. Effective programs educated millions of former slaves taught them self-sufficiency. In addition, nascent social service programs were created to provide for all needy citizens. Notably, Southern schools and public transportation were integrated during Reconstruction.

For the first time in American history, the federal government actively and vigorously defended the civil rights of black people. Despite severe political consequences, President Ulysses S. Grant deployed considerable personal and political capital toward the egalitarian goals of Reconstruction. President Grant believed in a multiracial America, and appointed more minorities to government positions than any president before or for a half-century afterwards.

President Grant faced down the KKK and other white supremacist terror groups with zeal. He ordered the Attorney General to relentlessly prosecute the Klan at a time when many Southern lawmen were members. His administration secured over 1000 convictions and broke the stranglehold of the Klan. Grant protected the 14th and 15th Amendments with military force and advanced black rights more than any president until Lyndon Johnson.

What happened to this progressive, multiracial Southern society? It was murdered. As the North grew tired of Reconstruction and moral fatigue set in, white Southerners waged a brutal campaign of terror to re-litigate the Civil War and restore white supremacy. This bloody crusade killed thousands of black people and their allies throughout the South. White supremacists terrorized their black neighbors into submission. As a result, the 1872 election would be the freest Southern election until 1968.

Memphis, TN, 1866. A group of black soldiers had been disarmed by local white residents. When tempers flared over their treatment, the black soldiers were attacked, and the Tennessee Attorney General led a posse to burn black neighborhoods. In total, nearly fifty black soldiers and civilians were killed.

Hamburg, SC, 1876. A white mob surrounded, disarmed, and murdered black national guardsmen. All the while, the attackers whooped, “we are going to redeem South Carolina today!”

Colfax, LA, 1873. In the tense atmosphere that followed the 1872 Louisiana elections, a group of black militiamen were surrounded inside a courthouse by hundreds of ex-Confederates. Outnumbered, the black militiamen surrendered, but no quarter was given. The courthouse became a slaughterhouse as nearly 200 blacks were massacred.

The Colfax tragedy was compounded by the Supreme Court’s ruling in U.S. vs. Cruikshank, where the court decided restricted federal government’s ability to prosecute individuals for civil rights violations. This ruling provided immunity to the killers and gravely weakened the Grant Administration’s effort to protect blacks.

These events were part of a sustained and ruthless war to assert white supremacy. As Northern support waned, blacks lost many rights they had gained during Reconstruction. By 1890, restrictions and intimidation had nearly eliminated the Southern black vote. Later, Jim Crow laws codified and enforced a system of discrimination. These policies stripped blacks of political or economic power for generations.

The end of Reconstruction was a retreat from our founding ideals. The consequences of that retreat are still felt today. Despite the advances of the Civil Rights Era, voter suppression persists.

Recent studies have shown that black voters were 10 times more likely to have their vote rejected than their white neighbors. Southern states have drastically scaled back early voting, which is disproportionately used by minorities. Republican states have tried to implement strict voter ID laws. A federal court rejected a North Carolina voter ID law, finding that it “targeted African-Americans with almost surgical precision.”

Deprived of political power, black Americans have fought an uphill battle against institutional racism in the legal system and the economy. Blacks are arrested twice as often as whites for drug offenses, are more often jailed before trial, and receive harsher sentences for similar crimes. Economically, black Americans were largely excluded from the post-WWII prosperity that came from homeownership and good jobs with generous benefits. Today, average black family wealth is less than one-tenth of average white family wealth. Black unemployment is double white unemployment. A lack of opportunity is the sad legacy of discrimination.

Reconstruction offered the promise of equality for black Americans. Our nation broke that promise and we continue to grapple with the consequences. When unarmed black men are shot, we assert that black lives matter, because even in 21stCentury America, the equality of black lives is still not self-evident. As we face down bigotry and racism,  warns us that progress can be reversed. Understanding Reconstruction means confronting the hatred in our history and standing up for a just society today.

The Slaughterers of Humanity hate everyone; most of all us. Has Phase II of the Slave trade ended with the unification of the brown children with their parents??

White man might hate us throughout all of our life times, but one thing's for certain, he'll decompose right along side us all in his grave. Ashes to ashes; dust to dust.

Journalist Dwayne Wickham informs us that it was Rutherford B. Hayes who eliminated "Reconstruction".  He sacrificed "Reconstruction" to secure his place as pre-sumptive President with the Southern Dixie Crats!

White people hate black people so damn much. Where would this country be without us?? They sure as fuck couldn't pick cotton. They would have looked like a bunch of lobsters in those fields. They couldn't do shit by themselves. Any cooking they learned, they learned from us. They didn't have music that was worth a damn and they damn sure had no sense of humor and still don't. I see these suckers on my big screen TV and I am shocked. Makeup everywhere; all shades of orange; if they have no makeup, there's Casper the Ghost in front of you. We've never asked ourselves "Who the fuck are these "people?" "Where did they come from?? Maybe Coronovirus will send them back to their original COUNTRIES. There'd be some NEGROES jumping for JOY if that HAPPENED, Coronovirus and all.

If ALL Black people in America were to just pack up and leave, then and only then will the rest of Americans see just how much they have been and still are being used by the Plantation Owners Oligarchy.

If ALL Black people were to just up and leave this country, ALL other minorities would have to follow suit.

Without Black people to scapegoat, ALL other minorities in this country couldn't take what they would be put through, and they would all leave, and White people would be put right back where their ancestors came from, a brutal, bigoted, sadistic, oppressive Class system that kept the majority of them in abject poverty near [or at] starvation under the foot of a an indifferent and/or down right sadistic Upper Class.

White People:  Are you "People?"If you let that fur grow the way it's supposed to grow, you'd all look like Big Foot. Your close-ups on my TV are starting to scare the hell out of me and I've been looking at you for years. The big screen TV brings all the false eyelashes, eye makeup, red lip lines on NO LIPS, pimples and bad skin everywhere. White women, you look like drag queens and white men, there's no description. Say what you want about black people, but you really need to look in the mirror, from head to toe with no makeup. You guys are a HOT MESS.  You've been making fun of our lips, but at least we have some. You and monkeys DO NOT!!! Who's the real KING KONG??

It's the culture...RRSOTD
24 hours ago

Harris on Buffalo shooting: 'We are seeing an epidemic of hate'
1 day ago