After doing some digging into the locations of Wisconsin’s predominantly Black neighborhoods, a teenage researcher discovered a disturbing trend among African-American communities in the Badger state.

Lew Blank, 17, was tinkering with the Weldon Cooper Center’s Racial Dot Map when he realized that over half of the state’s Black neighborhoods were actually jails or prisons. The remaining Black communities in the state were either Section 8 housing, homeless shelters, or apartment complexes.

According to Blank’s research, there are approximately 56 Black neighborhoods in Wisconsin — 31 of them are jails. The young researcher posted his startling findings on the Young, Gifted, and Black Coalition’s official blog. Using the Racial Dot Map, Blank identified predominantly Black communities, which were defined as “a certain area where the majority of residents are African-American.”

The case is similar for Fox Lake, Wisconsin, another white town, whose recorded Black population is roughly 15 percent. The city lies adjacent to a majority-Black jail though, so it can be inferred where much of its Black population comes from.

Madison, Wisconsin is also an important town to note, as it is one of the most racially disparate cities in the country, according to Blank’s research. The majority of the city’s Black neighborhoods are located in Section 8 housing and apartment complexes. There are also two homeless shelters and a large correctional facility.

“Perhaps one of the worst effects of the racial poverty disparities in Madison can be found in the Madison jails,” Blank wrote in a blog post back in February. “Of about 800 people in Madison’s jails, a whopping 400 (50%) of the inmates are Black. Even worse, 350 of the 400 Black inmates were arrested for crimes of poverty.”

“It’s called a crime of poverty, because it means that almost 90% of Madison’s Black inmates are in jail for a small crime (like public urination), and they’re still in prison simply because, with Madison’s poverty disparity, the bail is one that they just can’t pay off,” he continued.

Blank also pointed out the geographical isolation of Milwaukee’s Black residents. The city has since become known as one of the most segregated urban areas in America. The northern side of the city is concentrated with Black residents and is the sole predominantly Black neighborhood in the state that is not a prison or mostly low-income housing. It does, however, have three correctional facilities and two jails, one of which is located in a majority white neighborhood. According to NPR, a 2013 report by the University of Wisconsin-Milwaukee found thatthe state had the highest incarceration rate of Black men in the country. In fact, about 1 in 8 African-American men of working age were confined in state prisons or jails.

The city of Milwaukee made headlines recently after civil unrest erupted following the shooting of a Black man by police. According to Atlanta Black Star, an unnamed, African-American officer shot and killed 23-year-old Sylville K. Smith as he tried to flee a traffic stop Saturday. Smith was reportedly armed and refused to drop his weapon.

Violence ensued following the fatal shooting, as several businesses in the Sherman Park neighborhood were torched, cars overturned, and gunshots rang out. The National Guard was even called in to restore peace to the area, ABS reports. The violence continued for another night as protesters threw rocks and bottles at police and another person was shot.

But the violence and boiling tensions between Black communities and police officers didn’t come as a surprise to some. Residents in the area had long fought for police reforms, especially after an officer shot and killed Dontre Hamilton, a mentally ill Black man, back in 2014. The city’s racial violence was years in the making, according to Milwaukee’s Black residents.

“This isn’t just ‘Oh, my gosh, all of a sudden this happened,” said Sharlen Moore, 39, who lives in the predominantly Black neighborhood of Sherman Park. “It’s a series of things that has happened over a period of time. And right now you shake a soda bottle and you open the top and it explodes, and this is what it is.”

Similar unrest followed the death of Hamilton and the court’s decision to not press charges against the officer who shot him.

According to the New York Times, other factors like modern-day school segregation, imbalances in mortgage lending, and discriminatory housing barriers have also contributed to the city’s rising racial tensions.

“I think it’s a matter of having a dual conversation about what justice needs to look like in this particular situation,” said Reggie Moore, director of Milwaukee’s Office of Violence Prevention. “What are the systemic issues that need to be addressed around poverty, racism, segregation and inequity to reduce the likelihood of this [violence] happening again?”

Wow, that is really something. Visually those maps sends a strong message of what is happening to Black men over the decades. Good post Sunnubian.

Blacks sure as hell are hated and detested in this country aren't we??

All the Black people in Wisconsin should sue the maker/designer of that map, and should file a Class Action Lawsuit against the State of Wisconsin, and/or the Cities in Wisconsin that have conspired to create, utilize and authorize any official use of the RACIST "map".

As African Americans, we all should take the time research if RACISM is being depicted on such a "dot map" of our own city/town, or any other cities/town in America. 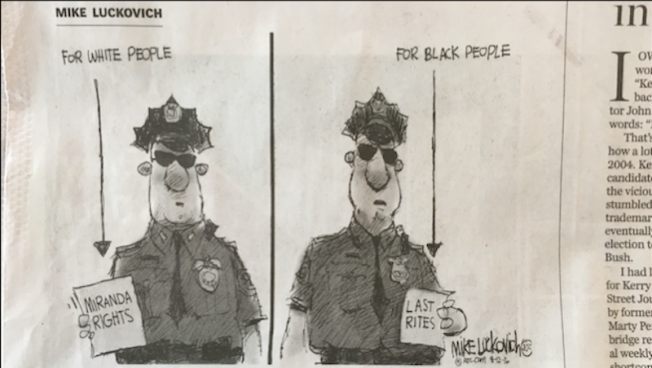 Blacks sure as hell are hated and detested in this country aren't we??

Hate me, detest me, but don't put your F--king hands on me or my children, and stay the F--k out of my face.

It's only a matter of time.