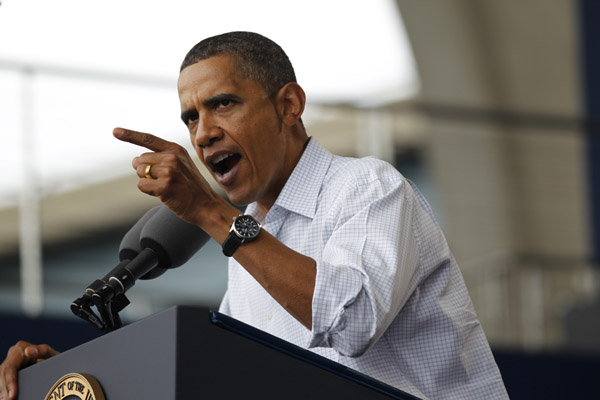 Has President Obama been listening to a lot of Jimi Hendrix lately?  With just under two months to go before Election Day, Obama kicked off the fall campaign season Monday with an aggressive speech targeting Republicans. But it was an off-script moment in the speech that's attracted the most attention, as Obama accused his GOP critics of talking about him "like a dog."

"Some powerful interests who had been dominating the agenda in Washington for a very long time -- and they're not always happy with me -- they talk about me like a dog. That's not in my prepared remarks, but it's true," Obama said during a speech at Wisconsin's Laborfest on Monday.

Watch Obama's remarks (the Hendrix quote is a little more than a minute in, at 1:13):

Though Obama didn't acknowledge it, the line was a verbatim quote from "Stone Free," the first song Hendrix wrote after moving to England in 1966. "They talk about me like a dog," the song says. "Talkin about the clothes I wear. But they don't realize they're the ones who's square."

It's unclear if Obama consciously or unconsciously cited the lyric. A White House spokesman did not respond to requests for comment. But regardless of its source, Obama's off-script message syncs with his overall frustration with Republicans, whom he has lambasted repeatedly as the "party of no."

With polls showing Democrats still trailing badly as the midterm campaign enters its post-Labor Day upsurge, Obama stepped up that attack line Monday. In his  remarks, he suggested that the GOP will always block bipartisanship, no matter the situation. "If I said the sky was blue, they'd say no," he vented. "If I said fish live in the sea, they'd say no. They just think it's better to score political points before an election than to solve problems."

It's all a part of the Democrats' efforts to convince Americans that a vote for the GOP this fall would return the country back to the state it was in before Obama won the presidency. Though polls show the effort isn't working, Obama has made the argument again and again, tying it to the issue that seems to be driving voters this fall: the economy.

"They're betting that between now and November, you'll come down with a case of amnesia. They think you'll forget what their agenda did to this country," Obama said. "They think you'll just believe that they've changed. These are the folks whose policies helped devastate our middle class and drive our economy into a ditch. And now they're asking you for the keys back."

(Photo of Obama in Milwaukee on Monday: Pablo Martinez Monsivais/AP)

EbonyRoseA1
I posted this story because I've determined it to be the DUMBEST ONE YET regarding the President!!!

I am so disgusted with the media these days I can't even watch the news.  And apparently, reading it isn't going to help me much these days either!

I swear ... some of these so-called "journalists" aren't even trying to be intelligent anymore.  They're just digging deep for the most ridiculous story they can come up with to attach something ... (whatever is beyond ignorant!) - to the President.

Does this woman have any idea how many people and times this phrase has been used?  But, she somehow goes and picks this particular phrase from a Jimi Hendrix song???

It's called..........super duper SUPIDITY...my sista!  Going in I knew this was gonna be a battle with my President.  Yes....cuz they don''t have anything on him, they are DIGGIN' deep!  Goes to show you that the media and massa is one of  the same,   You have idiot Beck doin sumthing STUPID  on Martin Luther King Speech Day.  Come on....how mofo stupid...and insultive was that?  These neantherdals...and I know there are few blackfolks here who are offended when I say that....but!  That's what they are!  Neantherals....with the intelligence of a green pea.  They encroach all their so-called wisdom from other cultures not their own...and then claim it!  But the stupid thing is....half the time they don't even KNOW what the heck they're claiming or talkin' bout.  They are sooooo arrogant...they don't even READ the book they claim belongs to them.  Ha!  How stupid is that?  As is why I'm ALWAYS talkin' about the hill billy arrogance of dumb dumb.

Reminds me of a class I took years ago.  Okay.  I was at home mom returning to college to keep my mind fresh.  Hell it was only ONE class.

And these knuckleheads were sooooo intimidated once they found out my age....that they tried to sabbotage me every time I raised my hand.   What they didn't know...ha! That wasn't my FIRST rodeo...as it were theirs.  And I always HAD the last laugh.  And don't get me talkin' about the young white whores there[sitting in the front roll]...with their deer in the highlight eyes....man!  The stories I could tell.  But the point is....they [massa and his boys] are trying to minimize who we ARE/what we have done....while maximizing the little bit they have accomplished...and I say little bit.  We carried the whole country on our backs for more than 400 years....and what do they talk about in terms of history?  How they won the west!  Huh?

Or how they civilized North America!  If that aint a stupid untruth JOKE...I dunno what is.  The most stupid thing to me is they REALLY believe it!  And past it on to their dumb dumb children...as is why you have these silly  journalists in this fashion reporting such asine gabbage[ this also reminds of the lynchings...where journalists would take pictures and report back about how massa dismantled and maimed unsuspecting blackfolks while they hung from trees tarred and feathered.]   Oh! Back to the story.  Once these young fools recognize that I was kinda "smart, they all wanted to sit next to me and copy my homework....how adolescent!

But that's how massa is.  He doesn't [know how to ]think for himself....and he has yet to grow up.  And I for one am NOT surprised at his current pranks.  But!

"i'll find out no matter what" RRSOTD
2 days ago