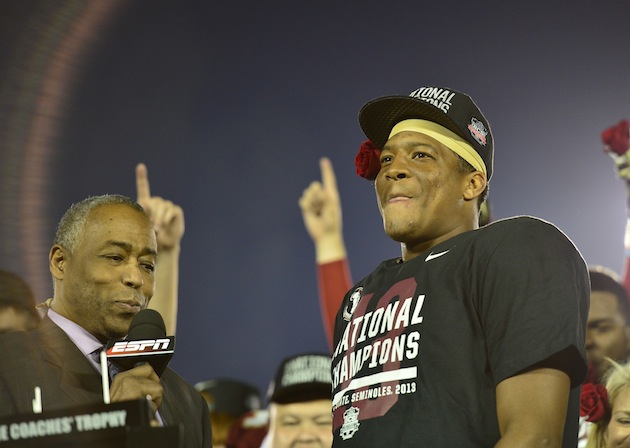 AJ McCarron’s mom, Dee Dee Bonner, made it no secret she was rooting for Auburn in Monday night’s BCS National Championship and she had some not-so-kind words for Florida State quarterback Jameis Winston as he delivered his postgame speech.

Winston, the Heisman Trophy winner, was named the game’s offensive MVP and answered a few questions for the television cameras and the crowd.

"I said guys, we didn't come here for no reason,” Winston said. “I said, 'Guys, this is ours, man.' All the adversity we went through the first few quarters, it was ours to take. And like I've been saying, we control our own destiny, And those men looked me in my eye and said 'We got this Jameis.' I said, 'Are you strong?' They said, ‘I'm strong if you strong.’ I said, 'We strong then.'"

Winston went on to answer several questions and while the answers might not have been wholly articulate, they were absolutely in English.

Bonner tweeted an apology later in the evening, claiming her initial tweet was not meant to be racist.

Any1 that knows our family knows we r far from racist. My tweet was not in anyway meant that way. I sincerely apologize if it offended any1

Graham Watson is the editor of Dr. Saturday on Yahoo Sports. Have a tip? Email her at dr.saturday@ymail.com or follow her on Twitter!