Crazy Crackers? oh boy! Ms Finney is one of those crackers! They have Neo-Confederates among their ranks, doing business and learning the ins and outs of the Republican party. Furthermore, they're now pandering to Latinos...  anywho.

But let me make note that a ticker came up which stated "How Africa became a hot bed of terror & challenges ahead for the new Sec'y of State". They are setting Africa up for 'regime' change... what's with that??!!

All republicans are going to do is put the word out to stop saying anything racist, hateful and anti-Latino/Hispanic/immigration in public, then the Latinos/Hispanics/immigrants are going to run back to them for that pat on the head that so many non-White people desperately want and crave from White people.

Republicans are going to try REALLY hard to "tone it down" and not say "bad" things about Hispanics in public.  They're even going to break down and "give" on a LOT of stuff that the majority of them don't want to give in on.  And many of them aren't gonna like it ONE BIT!!!  But ... they ARE going to shut up and go along with it, regardless.

And that's for one reason and one reason only .... they see the Hispanic vote as the best/only way to win elections from this point on!!  And winning is EVERYTHING to Republicans.  And they will (try to) do whatever it takes to make that happen.

However .... I don't think they can really do it!!  Being "inclusive" and "non-racist" is going to be a BIG stretch for them!!

The problem is they don't really MEAN what they're saying.  They're only saying it (as Republicans usually do) to 'get over'.  Which means they will probably be sticking their foot in their mouths before they even know it's coming!!

I am anxiously awaiting to see how they plan to pull this off!!

THIS is specifically the reason for the Republican Party's sudden 'change of heart' ... and has made them to want to come up with a plan to "play nice with the other kids." 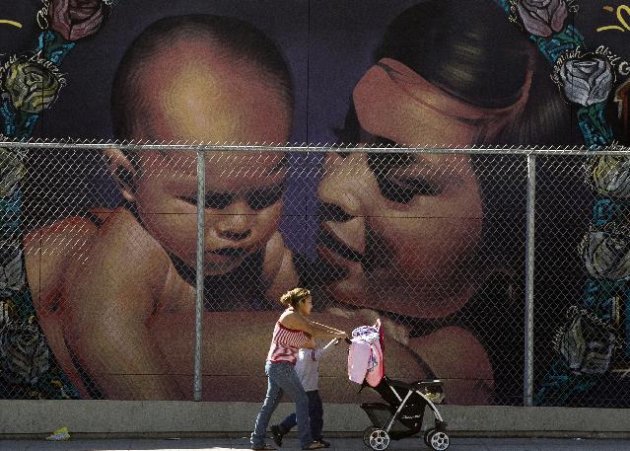 Hispanics will become the largest ethnic group in the nation's most populous state early next year, the California Department of Finance said Thursday, marking a big milestone in a long-running demographic shift that has already deeply altered the political balance of power, the economy and culture.

The prediction that Hispanics will equal the number of whites inCalifornia by the middle of this year and surpass them in early 2014 was disclosed in Gov. Jerry Brown's budget proposal in early January, but the latest numbers offer a far more detailed portrait of how the shift will unfold across age groups and geographic regions over the next five decades. Whites and Hispanics each currently represent 39 percent of the state's population.

In 2060, Hispanics will make up 48 percent of the population compared to 30 percent white.

Blacks are expected to slip from nearly 6 percent in 2010 to just more than 4 percent by 2060, while the Asian population, now just below 13 percent, may grow slightly.

California becomes only the nation's second state after New Mexico where Hispanics make up the largest racial or ethnic group. Whites currently lack a majority in only two states — Hawaii and New Mexico.

In Texas, Hispanics will likely become the largest group within 10 years, said Mark Lopez, associate director of the Pew Hispanic Center, which studies demographic trends. A long period of time will elapse before another state reaches that milestone, he said.

"It's an important milestone because California and New Mexico are so unique," Lopez said. "California is in a league of its own (because of its size)."

The shift has played out over the last decade as Hispanics filled more elected offices, including two lieutenant governors, the mayor of Los Angeles and important leadership posts in the state Legislature, said Louis DeSipio, a professor of political science and Chicano/Latino studies at University of California, Irvine.

Approval of a 1994 ballot measure to cut services to illegal immigrants was a turning point, prompting many Hispanics to become citizens and register to vote, DeSipio said. Redrawing the congressional map after the 2000 census reinforced their influence at the polls.

Hispanics may take more time to exercise the same influence in politics as they do in culture because those who are not citizens cannot vote, and they are disproportionately young, a group that generally tends to vote less often, DeSipio said.

In 2010, Hispanics were a majority in nine of California's 58 counties; by 2060, that could grow to 17, the finance department reported. Bill Schooling, chief of the department's demographic research unit, said counties with a strong Hispanic presence — like San Bernardino, Riverside and Kern, near Los Angeles — will be much younger than parts of Northern California and other remote areas.

The demographic trends show that California, like other states, will see its median age increase from the current 35 to 42 in 2060 but still be relatively young, thanks largely to Hispanics.

"Due to California's diversity and because of its role as the primary gateway state for immigration, California will not age as rapidly in the coming 20 years as many other states," the report said.

California's population is expected to hit 50 million in 2049, from about 38 million today, led by steady growth in Southern California. The percentage of women in the state will continue to slightly outnumber the percentage of men, due to longer female life expectancies.

Dowell Myers, a professor of demography and urban planning at the University of Southern California, said the projected growth of Hispanics is slower than earlier state estimates, allowing more time for the state to adjust and providing a "calming effect." The state's overall population is also growing less rapidly than earlier projected.