Movement to defund police gains 'unprecedented' support across US

Activists say the way to stop police brutality and killings is to cut law enforcement budgets and reinvest in services. Some lawmakers now agree

The movement to defund the police is gaining significant support across America, including from elected leaders, as protests over the killing of George Floyd sweep the nation.

For years, activists have pushed US cities and states to cut law enforcement budgets amid a dramatic rise in spending on police and prisons while funding for vital social services has shrunk or disappeared altogether. 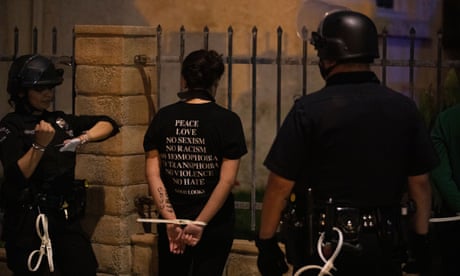 Government officials have long dismissed the idea as a leftist fantasy, but the recent unrest and massive budget shortfalls from the Covid-19 crisis appear to have inspired more mainstream recognition of the central arguments behind defunding.

“To see legislators who aren’t even necessarily on the left supporting at least a significant decrease in New York police department [NYPD] funding is really very encouraging,” Julia Salazar, a New York state senator and Democratic socialist, told the Guardian on Tuesday. “It feels a little bit surreal.”

Floyd’s death on camera in Minneapolis, advocates say, was a powerful demonstration that police reform efforts of the last half-decade have failed to stop racist policing and killings. Meanwhile, the striking visuals of enormous, militarized and at times violent police forces responding to peaceful protests have led some politicians to question whether police really need this much money and firepower.

Meanwhile, unemployment is surging amid the economic fallout of the coronavirus pandemic, with housing and healthcare crises worsening. Many governments have been making painful cuts to services and expect to see tax revenue fall even further in the coming year. But police budgets have not been affected, and some mayors are even seeking to expand law enforcement funding.

A snapshot of some of city budget debates that have escalated this week:

Defunding, said activist Jeralynn Blueford, is the logical response from leaders in this moment of unprecedented unrest. “If police had been serious about reform and policy change, then guess what? People would not be this angry.”

Blueford’s son was killed by Oakland police in 2012 and she’s been fighting for reforms since. “We allowed you to kill our children, and you said this was going to change, and you reneged on it. If we keep funding them, it gives them the green light to continue ”.

If police had been serious about reform and policy change, then guess what? People would not be this angry

Community groups advocating for defunding have put forward differing strategies, some merely opposing police budget increases, others advocating mass reductions, and some fighting for full defunding as a step toward abolishing police forces. Some initiatives are tied to the fight to close prisons. All are pushing for a reinvestment of those dollars in services.

Amid the protests, some local leaders with budgeting powers have started proposing modest cuts to policing. The most substantial change so far, has come in Minneapolis where the school board on Tuesday voted to end its contract with the police department. The University of Minnesota has also pledged to stop working with police.

“People have been fighting for years to get cops out of schools, and now it’s happening overnight,” said Tony Williams, a member of MPD150, an abolition group whose literature on building a “police-free future” has spread on social media in recent days. One elected Minneapolis ward member said this week that the city’s police department was “irredeemably beyond reform”, the kind of remark that would until recently have been unthinkable to organizers.

“This is unprecedented in our movement, but it is a natural consequence of where we’ve been over the last five years,” Williams said, rattling off high-profile killings by police that have failed to lead to substantive reforms.

Eric Garcetti, the Los Angeles mayor, addressed the broader protests in a speech late Wednesday night and said he was now working to make cuts of up to $150m to the police budget and reinvest funds in black communities, though specifics of his plans were unclear.

His move comes after a coalition convened by Black Lives Matter LA pushed for what it called a “people’s budget”, which encouraged the city to spend only 5.7% of its general fund on law enforcement, and 44% on universal aid and crisis management.

“In moments of crisis, people want services and resources that go directly to help people rather than police that surveil, brutalize and kill us,” said Melina Abdullah, the BLM LA co-founder, adding that Garcetti’s proposed cut was “minimal” and that officials “need to go much further”.

Even though many US police departments’ duties are responding to non-violent, non-emergency calls, departments have expanded their military-style arsenal in recent years. US police kill more people in days than many other countries do in years.

Senator Salazar in New York said the Covid-19 devastation is motivating lawmakers normally sympathetic to the NYPD to rethink the budget: “Every senate office … has been fielding an unfathomable number of unemployment claims. We’ve been thinking every day about how social services and the public safety net are failing people. Having come out of a bleak state budget process, it’s very frustrating to hear that $6bn figure for the NYPD.”

The city councilmember who chairs the committee that oversees the budget called for significant NYPD cuts this week. Although she doesn’t control NYPD financing as a state lawmaker, Salazar said she could envision police immediately losing $1bn from its budget just for current police functions that have nothing to do with law enforcement and crime, such as responding to mental health calls and other social services.

Kamau Walton, a Philadelphia-based member of Critical Resistance, a long-running US abolition group, said the absurdity of increased police spending in this moment was visible to many. Walton lives across from a recreation center and library that has been closed due to Covid, and said houseless people now gather outside, because they have nowhere else to go.

The city, however, is further cutting housing and homelessness services and seems to lack a summer plan for these communities who have lost programs, resources and jobs, they said. “At a drop of a dime, they can find money for uber-militarized tanks and fly helicopters all over the city and shoot rubber bullets, but we can’t put people in houses?”

Kelly Lytle Hernández, a UCLA historian and recent MacArthur recipient, said this could be a pivotal moment for the US: “We’ve created over the last 30 to 40 years a sense that our safety and wellbeing always comes from investing more and more in police.”

This week, it seems there is increasing recognition of this failure, she said, adding, “Defunding the police is the first step in a much broader historical transformation that I’m hoping you’re seeing broad-based support for on the streets today.”

Americans have had enough ...

... and are marching for justice in unprecedented numbers. In small towns and big cities across the country, thousands of people are giving voice to the grief and anger that generations of black Americans have suffered at the hands of the criminal justice system. Young and old, black and white, family and friends have joined together to say: enough.

The unconscionable examples of racism over the last weeks and months come as America's communities of color have been hit hardest by the coronavirus and catastrophic job losses. This is a perfect storm hitting black Americans. Meanwhile, the political leadership suggests that “when the looting starts, the shooting starts”. The president who promised to end the “American carnage” is in danger of making it worse.

At a time like this, an independent news organisation that fights for truth and holds power to account is not just optional. It is essential. Because we believe every one of us deserves equal access to fact-based news and analysis, we’ve decided to keep Guardian journalism free for all readers, regardless of where they live or what they can afford to pay. This is made possible thanks to the support we receive from readers across America in all 50 states.

Our business model is coming under great pressure from an unprecedented collapse in advertising revenues, and we’d love your help so that we can carry on our essential work. If you can, support the Guardian from as little as $1 – and it only takes a minute. Thank you.