sunnubianA1
Published on
by
Common Dreams

Right-wing misogynist Bill O'Reilly "will not be returning to the Fox News Channel," his parent company said Wednesday afternoon, following years of offensive commentary and what one media watchdog called "inaccurate and embellished reporting."

His ouster comes weeks after a New York Times investigation exposed how Fox News and 21st Century Fox had backed and protected O'Reilly even as sexual harassment allegations piled up against him and settlement payouts to his accusers reached a whopping $13 million.

That investigation amplified a long-standing campaign against O'Reilly's "reign of hate and abuse," as racial justice group Color of Change—which led the effort—described it on Wednesday. Following the Times revelations, Color of Change began directly pressuring corporate advertisers, urging them to pull their spots from "The O'Reilly Factor." At least 50 advertisers did so, according to the Times.

"Thanks to that pressure, Bill O'Reilly will no longer be a menace on-air or in the halls of Fox News' headquarters," said Rashad Robinson, executive director of Color Of Change, which also led a successful campaign to get Glenn Beck off the air in 2011.

However, Robinson added a crucial caveat: "Fox News and the Murdochs only listen when they hear the sound of money rushing out the door. If dozens of advertisers had not dropped 'The Factor,' Bill O’Reilly would still be endangering 21st Century Fox employees."

Others made similar observations online:

Having called for O'Reilly to be fired, the National Organization for Woman (NOW) also bid the host "good riddance" on Wednesday.

"O'Reilly deserves this downfall," said NOW president Terry O'Neill. "The many sexual harassment allegations leveled against him reveal a clear and ugly pattern of misogynistic behavior. It would be an insult to women everywhere to allow him to retain his coveted prime-time television slot."

But, she continued, "this isn't over. Fox News condoned, and even supported, O'Reilly's heinous misconduct for years—along with former chairman Roger Ailes and, reportedly, other Fox News executives. The public has the right to know the facts about the toxic culture of harassment that appears to be endemic at the network."

"NOW is calling for a thorough, independent investigation by New York City and state authorities into the culture of sexual and racial harassment at Fox News, and for appropriate accountability measures to be taken," O'Neill said. "How else can we be reassured that women will never again be subjected to this inhumane treatment while their harassers continue to pocket eight-figure salaries?"

"If Fox News wants to show women even an ounce of respect," she concluded, "a lot more needs to happen beyond firing Bill O'Reilly."

As Common Dreams reported earlier this month, President Donald Trump (who has also been accused of sexual assault and harassment) came to O'Reilly's defense following the Times exposé. "I think he's a person I know well—he is a good person," Trump told the newspaper the time. "I don't think Bill did anything wrong."

This work is licensed under a Creative Commons Attribution-Share Alike 3.0 License

WASHINGTON - ColorOfChange.org is calling on advertisers to pull their ads from The O'Reilly Factor after news this week that O'Reilly fabricated a story about being attacked by protestors while covering the 1992 Los Angeles riots. ColorOfChange.org announced that it will be contacting O'Reilly's advertisers directly to explain why they should leave the show, and running a public campaign to hold advertisers that refuse to do so accountable.

"For years, Bill O’Reilly has used lies and race baiting to attack black people, black culture, and civil rights. Now, he's been caught red-handed fabricating a story about being attacked by protestors during the 1992 L.A. riots."

"Black people have had enough of O'Reilly. We can’t force Fox to fire him, but we can vote with our dollars. We’re calling on all mainstream advertisers to leave O’Reilly’s show. Any company that cares about its relationship with black consumers should think twice about continuing to support O’Reilly. We will be contacting advertisers directly to make sure they understand our concerns, and working with our members to hold companies that refuse to act accountable.”

Color Of Change is the nation’s largest online racial justice organization. We help people respond effectively to injustice in the world around us. As a national online force driven by over one million members, we move decision-makers in corporations and government to create a more human and less hostile world for Black people in America. Visit www.colorofchange.org. 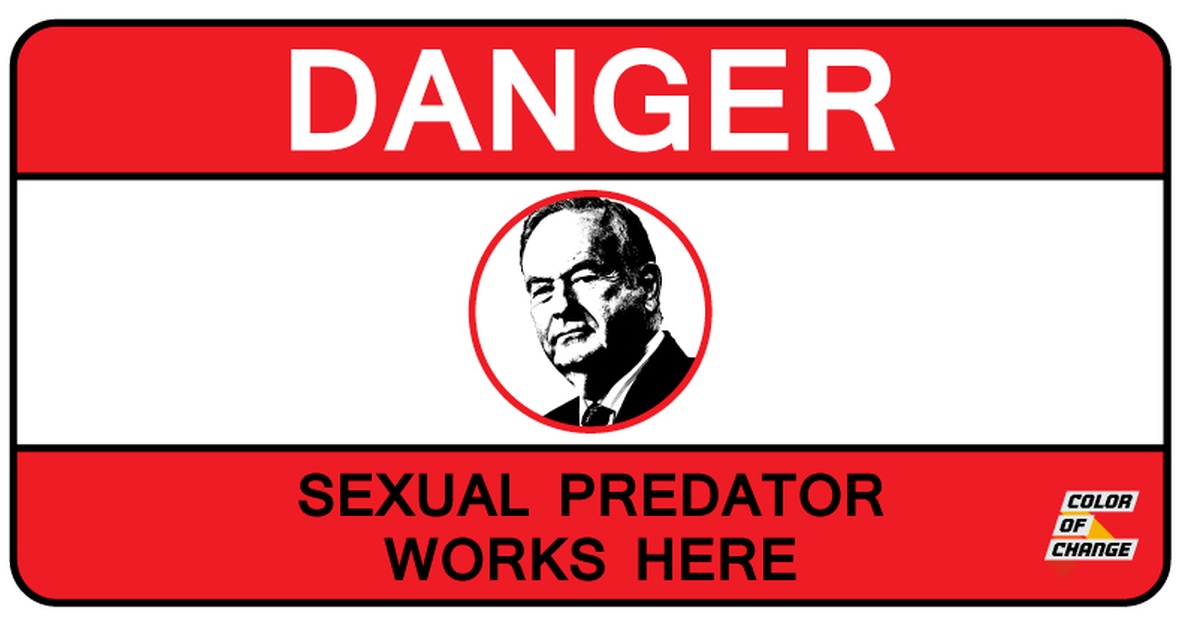 Companies like United, IBM, and Delta promote themselves as champions of diversity and inclusion. So why have they been bankrolling a television star who, in the span of just one week, earned headlines for sexually harassing female colleagues and mocking ...

"A corporation that allows sexual predators and racists like Bill O’Reilly to harass employees with impunity should not be allowed to endanger anyone else."

“As horrifying as these new revelations of sexual harassment are, no advertiser can claim it’s the first time they’re hearing about O’Reilly’s long, documented history of sexism and racism. From physically abusing his ex-wife and sexually harassing one of his producers ...

I can only say...this is the TIME for women.  It is time for our power to SHINE and get this shit back in order.  It will take a woman to bring this presidency down.  Watch!  But!

I hope that all the women that were subjugated, sexually oppressed, sexually harassed, emotionally and psychologically raped, and 'disffeminated' [my new word for making women feel ashamed of, or a need to hide or downplay their natural feminity],  and discriminated against, and wrongly terminated, by Bill O'Racist and Jabba The Hut, and anyone else at RACIST, SEXIST, FALSE PROPAGANDA SPREADING FAUX NEWS, literally sue FAUX NEWS into bankruptcy.