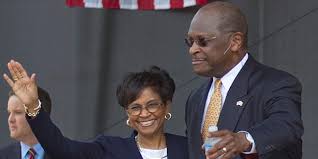 She has been virtually absent from the campaign trail as her husband, Herman, runs for the Republican presidential nomination. And she's been silent this week as the businessman fights to overcome allegations that he sexually harassed women while he led the National Restaurant Association in the 1990s.

Those who know Cain's wife of 43 years say she backs her husband's candidacy. Mrs. Cain is often described as "gentle" and "the nicest woman you'll ever meet," and people frequently remark on her faith and dedication to her husband and her family.

But it's unclear whether Mrs. Cain, 65, will step into the national spotlight to defend her husband the way so many spouses have done over the years when politicians are rocked by allegations of sexual misconduct.

Cain's campaign declined to make her available for an interview.

Relatively little is known about Mrs. Cain beyond what Cain writes about her in his 222-page book: "This Is Herman Cain!: My Journey to the White House."

Cain devotes a chapter to his wife; it's 3 1/2-pages long. He also dedicated the book to three groups of people, including his wife "for her unwavering support, patience, and sacrifice."

The chapter begins: "Gloria Etchison was beautiful. Let's face it; I was first attracted by her looks. And then I figured out she was also smart."

Cain writes that the two first saw each other on the street corner near the family owned grocery store where he worked as a college freshman. The future Mrs. Cain was walking down the street with a high school friend of his. It would be almost a year before the two went out on their first date – to the movies – while she was attending Morris Brown College and he was at Morehouse College.

"It was magic from that moment on, and so I didn't go out with anyone else. Neither did Gloria," Cain wrote.

The two were married June 23, 1968. They have two adult children – a daughter, Melanie, and a son, Vincent – and grandchildren.

As he runs for president, Cain wrote: "Gloria continues to be a steady source of devotion and inspiration, never more so than now." He acknowledges that people often ask why she doesn't campaign with him, and he tells them that she's at home. "And Gloria will tell them that she's not running but supports me 100 percent. That's all I need."

Mrs. Cain was with her husband in Omaha, Neb., during his years as a restaurateur and by his side as he beat colon cancer. In 1998, when the Cains returned to Atlanta, they also went back to Antioch Baptist Church North, Herman Cain's longtime spiritual home.

"She's a woman of deep faith involved in a lot of church activities," said Matt Carrothers, who worked on Cain's failed campaign for U.S. Senate in 2004 and later worked for Cain from 2004 to 2007.

Carrothers said that while going out on the campaign trail isn't her primary interest, Gloria Cain supports her husband in other ways.

"Whenever I would go to Herman's house, there were grandkids running around. She has her own activities, but she's fully supportive of everything he does," he said.

I wonder if the Republicans will dig into his church, assuming that he goes to a black church, to find things his pastor has said that might be controversial, like they did with Obama. I mean....fair is fair.

In my opinion you are not a good black preacher unless you are saying stuff that is....controversial....especially to white folks.

'Bout time.  Why was he HIDING her?  I STILL smell sumthing fishy.  Her persona is EXACTLY what he's been needing to buff his rough and very suspicious demeanor.   I mean he would have probably risen to new heights in his rating in the repub race had he brought her along.  But!  He didn't.  And the fact that she's NOW here, doesn't CHANGE my perspective of him.  I STILL don't trust him....he seems like a liar and a closet womanizer.  But we all  know that politicians will USE anything to discredit their opponents....however, if there is NOTHING in the first place, then there is no need to keep bringing it up in the forefront with constant denial-which Cain continously does.  For me, don't believe him, don't believe him,  Cuz if a politican can HIDE his homosexuality from his WIFE.....for years without  her having a clue....well!  Anything is possible in the case of Cain.  But!

"But it's unclear whether Mrs. Cain, 65, will step into the national spotlight to defend her husband the way so many spouses have done over the years when politicians are rocked by allegations of sexual misconduct.

Cain's campaign declined to make her available for an interview."

She is not "NOW here" why don't you read the article, you retard. You ever think maybe, just maybe it is her decision to not be in the spotlight.....I mean that is what I gleaned from reading this article.  She isn't a glory hound like many wives of candidates and even presidents.

I read this article last night.  It makes her sound like a pet.

"I STILL don't trust him....he seems like a liar and a closet womanizer."

That's all he is, what Black people call a "Bullshitter," or a "Shit Talker".  With African Americans, we know that there is one on every street corner, in every nightclub, in every family,  men who talk waaaaaay to much for a man, have an answer for everything, know everything, he is always right and everyone else is always wrong, and is bitter at somebody (women, Black people, rich people, poor people, his mama . . .); he is sneaky, dirty and can't be trusted no further than you can see him--with witnesses.  He is the man in the neighborhood that works hard, goes to church every Sunday, and thinks he is better that everyone else, and the minute his wife's back is turned he is trying to get fresh with the young girls/women in the neighborhood.

He can play his weak game with White folks, be We know his ass.

Quote by sunnubian: "He can play his weak game with White folks, be We know his ass".

He definitely big daddy mack pimpin' White folks and the one thing that he does that makes me believe that he's pimpin' is when he's making a political appearance in front of his White Republican brethern, at some point with some of his speeches, he will break out in song like a Black minister singing an ole' nergo spiritual on Sunday and the gullible White folks just eat it up, complete with tears.

"Oh we have never seen or witnessed anybody like him"..."he not a politican, he's one of us"....."he understands me, he feels my pain"..."he's the right man and has the ability and right message to fix this country and pull us out of this terrible recession"......yet as he gets closer and closer to being a serious candidate in the Republican presidenital nominee selection (and this was well before all this sexual harassment mess) you ask them the straight question..Would you actually vote for him to be the Republican candidate vs Mitt Romney or another candidate else against President Obama in the 2012 general election?......total evasion of the question or no response at all.

"Big Daddy" Cain is Sarah Palin 2.0 in blackface but I ain't mad at him. If they want to give all their money away (since this story broke, he has raised over 1.6 million dollars for his campaign) to another republican snake oil salesman this time wrapped in Black skin with a smoother delivery, them let 'em.

Palin got hers big time, so let Cain get his because at the end of the day, Cain, well before or during the Republican primaries, will be long gone, out of sight, out of mind and will join Michael Steele, Armstrong Williams and Alan Keyes in the Black Republican used car lot and on cue, they will dust off, shine up & activate another Republican brother to take his place.

He definitely big daddy mack pimpin' White folks and the one thing that he does that makes me believe that he's pimpin' is when he's making a political appearance in front of his White Republican brethern, at some point with some of his speeches, he will break out in song like a Black minister singing an ole' nergo spiritual on Sunday and the gullible White folks just eat it up, complete with tears.

I 'bout fell out my chair when I saw him do that the other night!!

He was serious, too!!

BESIDES all that .... there are White folks that would knock each other down to get to the voting booth to give him their mark!

However .... unfortunately, the 'powers-that-be' ... including, apparently Rick Perry, are determined to destroy him.

They will use and conspire with the media to make sure that he gets punched in the gut, discredited and disrespected as often as is possible.

He thought the Democrats would be his enemy .... but, he obviously didn't understand that it's the Republican Party that eats its young ... and old ... and middle-aged ... if they get in the way of what they want!!

The Dems SHOULD have enough ammo fire right now to blow ANY Republican nominee out of the water!!  But .... there's no guarantee they even know how to load the gun.

What happens next, I guess, we will have to wait and see.