Malia and Sasha Obama Attend Their 1st State Dinner; President Says ‘They Grow Up Too Fast’

Canadian Prime Minister Justin Trudeau, who, as the son of a former prime minister, knows what it’s like growing up in the spotlight, commended Malia and Sasha for their “extraordinary strength and ... grace.”

And perhaps it was a timely experience. Trudeau, whose own father was a prime minister from the time he was born until he was 8 years old, acknowledged the Obama girls' unique childhood experiences growing up in the spotlight of their dad's presidency.

"The memories for me of being a kid and not being old enough to attend these kinds of events with my father almost makes me wish I had gone through my teenage years as a child of a world leader—but not quite," Trudeau quipped during his remarks at the dinner.

Sasha Obama attends a state dinner at the White House in Washington, D.C., on March 10, 2016. Hosted by President Barack Obama and first lady Michelle Obama, the dinner is in honor of Prime Minister Justin Trudeau and first lady Sophie Gregoire Trudeau of Canada.

"I admire you very much, both of you, for your extraordinary strength and your grace, through what is a remarkable childhood and young adulthood that will give you extraordinary strength and wisdom beyond your years for the rest of your life. The one thing that you have received from your extraordinary parents is the tools to be able to handle the challenges and the opportunities in front of you. So thank you very much for joining us tonight," the prime minister added.

Even President Barack Obama got a little nostalgic during his remarks recalling how little the first daughters were (Malia just 10 and Sasha, 7) when he was first elected. "They grow up too fast. This fall, Malia heads off to college. And I’m starting to choke up," the president said.

" . . . This time, the guiding principle seemed to be “princess moment,” as both girls selected super-romantic gowns from the designer’s recent collections. Malia, 17, chose a simple, sophisticated blush gown with a sweetheart neckline and allover crystal beading, which once retailed on Moda Operandi for $17,990. Sasha, 14, went for something a little bolder, deciding on a beaded lace and appliqué ballgown in shades of cranberry, turquoise, black and beige; it formerly sold for $19,990. . . . " 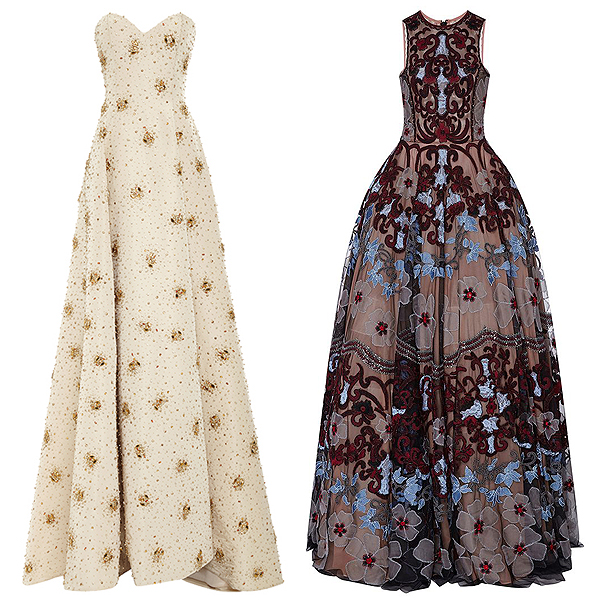 I saw this yesterday.  Wow!  They are sooooooo beautiful and grew up sooooo fast.  Last I saw Sasha?  She was a itty bitty little thing...now?  She's as elegant as her princess sister.  With all the stuff that is going on?  Black people especially young girls...need to see THIS.  These beautiful young black women...they are OUR princesses.  We deserve to have princes and princesses i.e. the original royalty represented.  They have did nothing but made us proud.  Little black girls are supposed to feel like and treated like little princesses...because that is they're legacy and heritage.  We were not BORN sex slaves or work slaves.  We were born into an advanced civilization who did EVERYTHING they could to keep the MONSTER subhumans out.  But nevertheless in our  journey  back to our royal status...we have managed [without education and money] to rebuilt our culture from scratch and enable others to benefit from the richness of it as well.  If that AINT royalty...I don't know what is.  Soooooooo proud of these ladies...oh yes I am.