This article is 1 month old

Contracts between police and city authorities, leaked after hackers breached the website of the country’s biggest law enforcement union, contain guarantees that disciplinary records and complaints made against officers are kept secret or even destroyed.

A Guardian analysis of dozens of contracts obtained from the servers of the Fraternal Order of Police (FOP) found that more than a third featured clauses allowing – and often mandating – the destruction of records of civilian complaints, departmental investigations, or disciplinary actions after a negotiated period of time.

The review also found that 30% of the 67 leaked police contracts, which were struck between cities and police unions, included provisions barring public access to records of past civilian complaints, departmental investigations, and disciplinary actions.

Samuel Walker, a professor in criminology at the University of Nebraska, Omaha, said there was “no justification” for the cleansing of officers’ records, which could contain details of their use of force against civilians.

“The public has a right to know,” Walker said. “If there was a controversial beating, we ought to know what action was actually taken. Was it a reprimand? A suspension?”

Walker said that while an officer’s whole personnel file should not be readily available to the public outside of court proceedings, records of disciplinary action should be.

The leaked contracts became publicly accessible last week, when hackers breached the Fraternal Order of Police’s website and put around 2.5GB worth of its files online. These provide a glimpse into the influence of police unions, which Black Lives Matter activists have accused of impeding misconduct investigations, particularly after the death of 25-year-old Freddie Gray in Baltimore, Maryland in April. 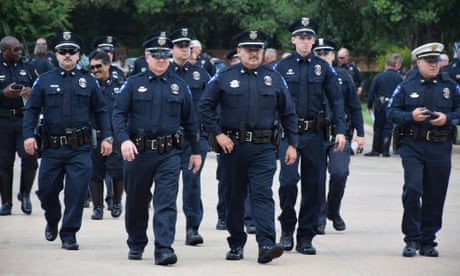 The documents date back almost two decades and include agreements from unions such as the Policemen’s Benevolent Association and the International Brotherhood of Police Officers. Many contain numerous recurring clauses that slow down misconduct investigations, prevent public access to complaints and disciplinary records, and enable the destruction of complaints and disciplinary records after a negotiated period of time.

At least as recently as 2007, if an officer in Independence, Missouri, was “involved in a shooting incident”, that officer could not be interrogated for at least 12 hours nor be “treated a suspect” unless local authorities thought there was reasonable suspicion or probable cause that a crime had been committed. This protocol was mandated in the local police union’s contract in a clause specifically designed for “officer-involved shooting investigations”.

In recent years, Independence has made headlines for cases of police brutality and police shootings.

From small towns in Nebraska and New Jersey to major cities like Cincinnati, Ohio and Jacksonville, Florida, “expungement” clauses allowed for records of formal investigations and written reprimands to be “purged” after a few years or, in some cases, months.

Chuck Canterbury, the FOP president, said that such contract provisions were designed to protect the due process rights of police officers. “Disciplinary files are removed because they affect career advancement,” said Canterbury. “People make mistakes and if they learn from them, they should be removed. This is standard HR practice.”

Other deals contained provisions focused on blocking public access to records that were preserved. A 2006-2008 contract from Burlington Township, NJ, for example, required the police department’s Investigations Commander to keep formal complaints and internal investigation documents “in a locked file”, barring access to all except the department’s investigations commander and chief law
enforcement officer.

Similarly, in Ralston, Nebraska, the 2009-2012 FOP contract created a “Police Officers’ Bill of Rights”, which said: “Unless agreed to by the Officer, the City shall not divulge the reason for any disciplinary action that is not appealed to the Civil Service Commission.” The city was also bound to “make every reasonable effort”
to prevent a photograph of the officer from being released to the public or news media.

Among five other FOP contracts, where such confidentiality clauses could not be inserted because of state open records laws, several included language seemingly designed to help officers beat public records requests.

One 2009-2011 FOP contract from Hamilton County, Nebraska, initiates a mandatory five-step response to public records requests, in which the department would ascertain the identity of the person making the request, provide the officer with a summary of the would-be released information, guarantee the officer five days to object to the request, and allow the officer a departmental hearing to make the case that the release could threaten his or her personal security.

Devon M Jacob, a civil rights attorney and former police officer, said: “These are public employees, so their performance should be available to the public. There’s no reason matters of waste or wrongdoing should be kept away from the public. I disagree with this idea that unsustained complaints or investigations don’t matter.”

Speaking to the rationale for sealing off investigatory and complaint records, Canterbury, the FOP president, said: “It’s mostly the false or unsustained complaints that officers feel unduly hurt their careers. Nobody expunges guilty adjudicated use-of-forces, so if these acts are found unsustained in the first place, why should they continue to have any bearing on officers?”

In Jacksonville, Florida, however, according to a 2008-2009 FOP contract, if an officer were to receive a written reprimand with suspension or loss of pay, after a sustained formal investigation, that action would have to be purged after five years.

Often, even substantiated use-of-force allegations fail even to garner penalties as high as a reprimand with suspension. To put this in perspective, even in cases between 2010 and 2015 in which the NYPD’s office of the inspector general confirmed that officers had used unwarranted excessive force, officers were given no discipline 35.6% of the time.

According to the contracts, however, most of the investigations into police misconduct are led by officers’ supervisors or investigators within the department – a process that leaves some reform advocates skeptical. One leaked 2004-2006 contract from Worthington, Ohio, said that any city official who received a citizen complaint about a police officer must advise the complainant to go to the police department instead. “If the citizen does not wish to contact the Division of Police,” the contract said, “City staff should contact the Division of Police in a timely manner and advise a supervisor of the complaint.”

Alex Vitale, an associate professor of sociology at Brooklyn College, said such contract measures in effect undermined the possibility of robust civilian review boards for police. “You could pass a law to create a civilian oversight commission, but that law can’t supersede what’s in the contract,” said Vitale. “They just want to make clear what the process is and make sure there aren’t independent investigations. The police think ‘no one understands what we do’. It’s all part of this ‘us against the world’ mentality that dominates police thinking.”

Canterbury said the FOP rejects the idea of civilian review boards. “Departments do much better than civilian review boards because civilians have no knowledge of law enforcement or expertise on procedures,” he said. “Police departments do a very good job on internal reviews, plus we already have external review processes like local governments, prosecutors’ officers, and grand juries.”

Black Lives Matter activists argue, however, that there are too many conflicts of interest for the police to impartially investigate their own members. “Beyond the role nepotism and cronyism continues to play in the corruption of law enforcement, there is an inherent distrust of the police’s ability to keep communities safe,” said Delaine Powerful, an organizer in the Black Youth Project. “We cannot trust a system born out of slave patrols and night watches to conduct its own criminal investigations into unnecessary and unwarranted force by police.”

Ron Hampton, a former director of the National Black Police Association and a police officer in Washington DC, said: “People just don’t feel that the police can investigate themselves thoroughly or impartially.

“When we see all of this stuff on film, then it goes to the internal investigation and grand jury, etc, and then no indictment, no trial ... I don’t see how you can have trust in a process that doesn’t work for you.”

The guys that have experienced white-man brutality should form a group and write a book. Put it on YouTube; everything else is on the site. Nothing like facts coming straight from the horses' mouth. They know the real deal.