No job? Cain says 'blame yourself'

Presidential candidate Herman Cain will join Lawrence on the show tomorrow night. It is something he said in a recent interview with The Wall Street Journal that's catching our attention today.

When asked about the ongoing Occupy Wall Street protests, the former CEO of Godfather's Pizza and rising GOP-star said, "I honestly don't understand what they're looking for." He brushed off the widespread demonstrations as a staged display to "distract from the failed policies of the Obama administration."

Cain acknowledged the banks fueled part of economic crisis of 2008. He noted it's 2011, suggesting to hold the banks accountable now is just an excuse.

The 19-day-old Occupy Wall Street movement continues to gain momentum with the Left, as Democratic politicians, progressive groups and unions are joining the cause.

No one has to worry at all about Mr. Herman "Godfather Pizza" Cain.

He's doing exactly what his Republican ilk wants him to do and he's cool with it.

He is currently serving his short term purpose as the leading house negro for the Republicans. The same as Michael Steele, Armstrong Williams and Alan Keyes before him. And in addition to Herman Cain, casting a smaller spotlight is Rep. Allen West of Florida.

He's purposely placed out front (only one Black at a time on an annual basis) so as to ensure that the Republicans aren't criticized for being wholly racist, not being tagged as non-inclusive and for not supporting minorities (African Americans) while at the same time he acts as the perfect foil for Black President Obama (this is what they wanted Michael Steele to do) and with that distinction, he can as a Black man, safely say anything as radical or insane as he wants ("No job? 'Blame yourself', "Blacks have been brainwashed" etc) since no White Republican dare say those things but they know that as long as Mr. Cain is out front leading the point and rallying the troops, White Republicans who feel safe but with much caution, stand tucked in closely behind him and carefully offer their comments regarding his words because after Herman Cain says it first, then it's ok for me to comment and if it all blows up, then it's all his fault and then the sewer rats scatter.

Herman Cain fully understands this, the media understands this and he's getting exactly what he wants; a conservative voice, popularity, much TV time, a bookmark in the history books as an African American Republican Presidential candidate, he's traveling the country, he's pushing his new book, he's gettin' paid, Republicans love him and just like Sarah Palin but so much, he's emptying the pockets of brainwashed right wing tea party Republicans and filling his money coffers.

And when he finally bows out of the Republican presidential race (he won't have the monthly fund raising dollars to compete with Perry or Romney and Republicans won't vote for him) and the 2012 election is over, be it a Republican win or loss, he will quickly disappear from the national radar just like his Black predecessors but he will be happy since he got exactly what he wanted: fame, a little glory, some Republican respect and a boat load of money.

Brotha Cholly wrote: No one has to worry at all about Mr. Herman "Godfather Pizza" Cain.

He's doing exactly what his Republican ilk wants him to do and he's cool with it.

He is currently serving his short term purpose as the leading house negro for the Republicans. The same as Michael Steele, Armstrong Williams and Alan Keyes before him. And in addition to Herman Cain, casting a smaller spotlight is Rep. Allen West of Florida.

I totally agree.  You don't have to be a rocket scientist to discover that he is the ole traditional steppin fetch it.  It is sooooooooo obvious, Steve Wonder can see it.  Whitefolks are just plain stupid if they think we can't see through this circus of bafooshish black representatives they continue to put out there. Get me a break!

The minute Cain, Steele and others opened their mouths, it was CLEAR what was up.

This reminds me of this 48 hours epsiode I saw the other day regarding this Indian guy[from India] who paid a hitman to kill his BLACK daughter in law.  Guess what race the hit man was?  Black!!!!  How can a black man kill someone in his OWN race for a meager $10,000?  In which he has to split two more times with two other black men who helped him set it up.  So to see traders among us is NOT rare at all.  Some of us have no moral compass.  And many blacks i.e. the cain-steele of black culture has this type A personality....almost narcartic[sp] where it's about being in front...being on top no matter the cost-regardless who gets hurt...even if it's their own culture.  The bottom line:  Notoriety and Money. I call it treason...but!

I worked for IBM.  There is constant social pressure to be sucked into the GROUP THINK.  Some people do.

But there is Black Group Think also.  It is not necessarily correct.

I worked for IBM.  There is constant social pressure to be sucked into the GROUP THINK.  Some people do.

But there is Black Group Think also.  It is not necessarily correct.

Yep the pressure.  And I am almost just disappointed these days that sooooooo  many blacks can easily be SUCKED. I'm used to independent thinking out of the box black folks who can see beyond the ridiculous...and STUPDITY.  And fight for what is RIGHT.  I guess no more!  Which is tragic.  Cuz socialization is something we used to do to obtain/or abstain unity.  But today?  Not so much.  We are more concerned about what others THINK of us. What we drive, where we live-how we look.  And to me....that's sliding backwards into unproductive nothingness. But!  I'm just sayin

Its time that Africans see that we can't trust on White people for jobs. We're going to have to create our own. Because believe me, they are not thinking about our suffering, our high depression level unemployment rates. They don't care. But we should.

Its time that Africans see that we can't trust on White people for jobs.

We keep talking about buying power.

How many hundreds of billions of dollars have gone through Black American's hands in the last 40 years or so?  Why can't we have said accounting should be mandatory for all Black kids?  We call White people racist and let them decide curricula.  YEAH RIGHT!  They don't make accounting mandatory for the White kids.  The school system is designed to keep most White kids dumb.

So why don't we have a Black National Recommended Reading List even if the White people are too dumb to make one?

Let's face it, part of the competition game is keeping other people ignorant.  But what sense does that make in the world of the Internet?  Oh yeah, most of the Internet is garbage information.  Computers cannot tell what is important and correct.  So it comes back to people sharing info.

The more he talks, the bigger the IDIOT he sounds like.

Cane:  Racism not holding anyone back 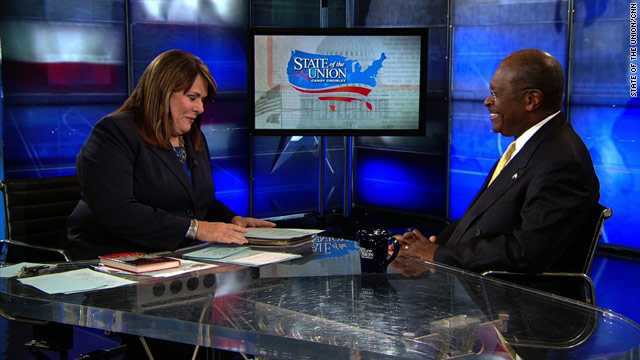 Presidential candidate Herman Cain said Sunday that he didn’t believe racism was a major factor holding minorities back in America, asserting instead that African Americans had a level playing field on which to advance economically.

“I don't believe racism in this country today holds anybody back in a big way,” Cain said on CNN’s “State of the Union.” “Are there some elements of racism? Yes. It gets back to if we don't grow this economy, that is a ripple effect for every economic level, and because blacks are more disproportionately unemployed, they get hit the worst when economic policies don't work. That's where it starts.”

“The gap is due to a number of factors,” Cain said. “One is a differential in education. Two is a concentration of a lot of blacks in certain areas like the city of Detroit, where the unemployment rate there is 14% versus the 9.1% we have nationally. So you have a city like Detroit where they lost 25% of their population, economically they’ve done nothing but go down, down, down.”

When asked by CNN Chief Political Correspondent Candy Crowley if he thought African Americans had a level playing field, Cain said he thought most of them did, using his own experience in corporations as an example.

“Many of them do have a level playing field,” Cain said. “I absolutely believe that. Not only because of the businesses that I have run, which has had the combination of whites, blacks, Hispanics - you know, we had a total diversity. But also because of the corporations whose board I've served on for the last 20 years. I have seen blacks in middle management move up to top management in some of the biggest corporations in America.”

As for African Americans who remain economically disadvantaged, Cain said they often only had themselves to blame.