NAACP chairman Julian Bond poses for a portrait during the 41st NAACP Image awards held at The Shrine Auditorium on February 26, 2010 in Los Angeles, California. (Photo by Charley Gallay/Getty Images for NAACP)

The images from last week's May Day protests look like a montage from a movie set in the 1960s. Sign- and bullhorn-wielding protesters organized by the Occupy movement railed against the capitalist industrial complex, while riot gear-clad police sought to contain them with tear gas and flash-bang grenades. Dozens were arrested.

Weeks earlier, thousands gathered in cities across the country to demand the arrest of George Zimmerman. These protests were searing indictments of the Sanford, Florida police department's handling of Zimmerman's killing of unarmed teenager Trayvon Martin. They were also rallying cries against the implicit racism embedded in Martin's identification as suspicious, and the gun laws that buttress Zimmerman's defense. Those who couldn't physically take part in the marches took to Facebook, Twitter, and other social media platforms to express solidarity via status updates, shared links to articles, posted pictures, and hashtags.

The protests, marches, and Tumblr feeds springing up against capitalism and racism reflect the confluence of deep frustration with the status quo -- and the means enabling people to more easily protest. We are in a new moment that echoes the start of the Civil Rights Movement, when thousands in Montgomery, Alabama carpooled and walked to work in solidarity with Rosa Parks after she was arrested for refusing to give up her seat to a white passenger in 1955 -- another organized group effort.

In other words, mass frustration, social media and timing have brought the 1960s into 2012. How can the black community best take advantage of this new surge of populist activism?

"This is an exciting time," Ytasha L. Womack, author of Post Black: How a New Generation is Defining African-American Identity, told theGrio. "Many people want to explore ways that reframe how we discuss and act on issues that have defined the past. We want to look at what's changed, what has not, and how we can build a better tomorrow."

Veteran NAACP leader and former professor of civil rights Julian Bond cites the ability to identify with Trayvon Martin as part of the reason the boy's death sparked a renewed interest in activism. "So many people identified with him because they had a little brother or a kid down the street or somebody they knew who's like him. It's like Obama said, had he had a [son], he'd look like Trayvon Martin," Bond told theGrio. "And I think all of us felt the same way. I have three sons and one of them easily, or all three of them could have been this kid. So it just strikes us in a peculiar way. It's so horrendous that it happened. The law that allowed it to happen is itself horrendous -- and it just struck a chord with black people everywhere and some white people as well."

With the proliferation of social media tools available to express our outrage, the 24-hour news cycle that feeds on provocative sound bytes, and the presidential election just six months away, the time is ripe for discussing weighty matters. Bond believes African-Americans need to seize the moment to channel the activism sparked by Trayvon Martin and Occupy Wall street into concrete political work. The black community has a lot to lose otherwise.

It would be wonderful if Black people realized that there was non-violent face to the Civil Rights movement as well as a self-defense/armed side also. The way that the white media has spun as if there was some sort of opposing view between the two and that the non-violent philosophy is far superior. When in fact they worked hand in hand for what they felt would be black liberation and to get white people off our backs.

It would be wonderful if Black people realized that there was non-violent face to the Civil Rights movement as well as a self-defense/armed side also. The way that the white media has spun as if there was some sort of opposing view between the two and that the non-violent philosophy is far superior. When in fact they worked hand in hand for what they felt would be black liberation and to get white people off our backs.

Eloquently stated, Yemaya. Those in the corporate media are well aware of this reality however they do their best to downplay any connection.

Sign the card to the Bond family to express your condolences. 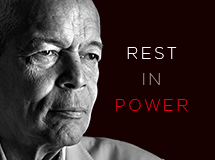 He was a revolutionary, a civil rights icon, a pioneer, a poet and a national treasure.

Julian Bond, who was a founding member of the Student Nonviolent Coordinating Committee and a chairman of the NAACP, passed away at his home in Florida on Saturday, August 15.

His determination and commitment to justice is why we will hold fast to Julian Bond’s memory. His reach extends far beyond his own generation’s advocacy for civil rights and continues to motivate us to work to give voice to Black people. As the SNCC communications director turned movement leader, he helped build the foundation on which all justice-oriented organizations, including ColorOfChange, are able to organize today.

Our thoughts are with the Bond family as they fulfill his final wishes by putting him to rest at sea in a private ceremony. Please join us in sending condolences to his family by signing this card.

It was difficult reading this announcement from Morris Dees, head of the Southern Poverty Law Center.

It is with great sadness that we announce the passing of legendary civil rights activist Julian Bond, SPLC's first president. He was 75 years old and died last evening, August 15, in Fort Walton Beach, Florida.

From his days as the co-founder and communications director of the Student Nonviolent Coordinating Committee in the 1960s to his chairmanship of the NAACP in the 21st century, Julian was a visionary and tireless champion for civil and human rights. He served as the SPLC's president from our founding in 1971 to 1979, and later as a member of its board of directors.

With Julian's passing, the country has lost one of its most passionate and eloquent voices for the cause of justice. He advocated not just for African Americans, but for every group, indeed every person subject to oppression and discrimination, because he recognized the common humanity in us all.

Julian is survived by his wife, Pamela Horowitz, a former SPLC staff attorney, and his five children.

Not only has the country lost a hero today, we've lost a great friend.

For those of us of a certain age, Julian Bond was always a part of our civil rights landscape of struggle. Tributes have poured in from many people around the globe who have been touched by his activism, including one from President Obama.

I thought it would be fitting to share many of the materials that are readily available online about his life and work.

Julian Bond is an American social activist and a leader in the American Civil Rights Movement. Mr. Bond helped found the Student Nonviolent Coordinating Committee (SNCC) in the early 1960s; was the first president of the Southern Poverty Law Center; served 20 years in both houses of the Georgia Legislature; and from 1998 to 2010, served as chairman of the National Association for the Advancement of Colored People (NAACP). Mr. Bond is also an author of books, the creator of a comic book, and a poet.

He was recently the subject of a short film (34 minutes).

Trailer of the movie "JULIAN BOND: Reflections from the Frontlines of the Civil Rights Movement.” A Film by Eduardo Montes-Bradley. Distributed by Filmakers Library an imprint of Alexander Street Press.

Notes: This enlightening portrait joins African American social activist Julian Bond as he traces his roots back to slavery. A leader in the Civil Rights Movement, Julian Bond was among the founders of the Student Nonviolent Coordinating Committee, a leader of the 1963 March on Washington, and a Georgia legislator for twenty years. Now in his seventies, Bond recalls the experience of growing up in the segregated south, where his parents' belief in hard work and education lifted the family out of what he describes as an apartheid system...

A Time to Speak, A Time to Act, is a collection of essays by Julain Bond.  Many people are not aware that he created a comic book "Vietnam," in 1967, which was illustrated by T.G. Lewis.

The 20-page, black-and-white comic book (the cover seems lost; so 19 pages are available online) begins with listing all of the black American leaders—from King to Adam Clayton  Powell Jr.—who opposed the war in Vietnam.

Then Bond summarizes what he feels is the average black man’s view in 1967: that the fight for democracy was here in America, not in Southeast Asia.

Bond points out that while blacks were fighting in the Civil War for their right to not be enslaved, the French were fighting to colonize Vietnam.

He narrated A Time For Justice.

A Time for Justice is a 1994 American short documentary film produced by Charles Guggenheim. It won an Academy Award in 1995 for Documentary Short Subject. The film was produced by Guggenheim and the Southern Poverty Law Center.

This 38-minute film, narrated by Julian Bond and featuring John Lewis, presents a short history of the Civil Rights Movement using historical footage and spoken accounts of participants. Events recounted are the Montgomery Bus Boycott; school integration in Little Rock, Arkansas; demonstrations in Birmingham; and the 1965 Selma to Montgomery march for voting rights.

Bond hosted an interview series with many black leaders and activists, many of which I've used in the classroom.

Explorations in Black Leadership Series, for the University of Virginia, Co-Directed by Phyllis Leffler & Julian Bond

Between 2000 and 2014, more than fifty African American leaders agreed to participate in a videotaped interview to share their thoughts about black leadership in America.

You can watch most of the interviews, conducted by Bond, on YouTube.

Julian Bond was also an outspoken advocate for LBGT rights.

It is impossible to list all of his contributions here today.

Let us simply say, that he made a difference.  A path we can all attempt to follow.

Sign In To Reply
Post
I Can't Breathe': Man Dies After Minneapolis Police Officer Seen Kneeling On His Neck
22 hours ago