PLAINFIELD, Vt. (AP) — A one-time death row inmate now serving a life sentence for the 1981 murder of a Philadelphia police officer spoke to students graduating from a Vermont college on Sunday, encouraging them to strive to transform the world.

Mumia Abu-Jamal spoke by video to 20 students receiving bachelor degrees from Goddard College in Plainfield. He earned a degree from the college in 1996.

"Think about the myriad of problems that beset this land and strive to make it better," Abu-Jamal said in the video.

He said his studies at Goddard allowed him to learn about important figures in distant lands.

"Goddard reawakened in me my love of learning," he said. "In my mind, I left death row."

The former Black Panther did not address the crime for which he was convicted. He originally was sentenced to death for killing white police Officer Daniel Faulkner on Dec. 9, 1981, but he was resentenced to life in 2012. 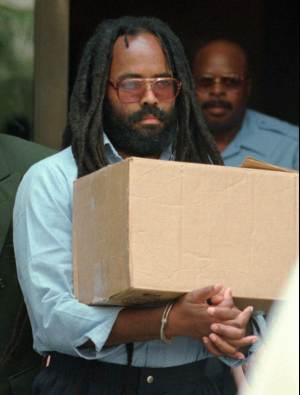 His claims that he's been victimized by a racist justice system have attracted international support. A radio show, documentaries and books have helped publicize his case. Goddard College describes him as "an award winning journalist who chronicles the human condition."

But the decision to allow Abu-Jamal to speak angered police and corrections officials in Vermont and Pennsylvania. The Vermont Troopers Association said it showed a disregard for the victim's family at a time when the nation is seeking solutions to gun violence.

Goddard, a low-residency school where students, staff and faculty spend eight days on campus twice a year, holds 20 commencement ceremonies every year, so students in each degree program can individualize their graduations and choose their speaker.

The school, which has about 600 students, says the graduates chose Abu-Jamal as a way to "engage and think radically and critically."

Goddard students design their own curriculums with faculty advisers and do not take tests or receive grades.

Their tears is delicious

John Teetz
in the last week-
Pathetic that your "school" and I use that term very loosely chooses to celebrate a cop killer. The world is full of heroes like Danny Faulkner who served their country and came home and worked and served his community. But you choose to honor the savage that murdered him. Your school and the "students" that picked mumia are pathetic.
Kaye Roberts
in the last week-
Fortunately, I had never heard of this college until the news broke. Maybe, just maybe, they are desperate for publicity by allowing the students' choice of speaker (the killer). God help the poor blokes who are going to work with, or interact with, these graduating students who are being let loose on the U.S. I foolishly thought that speakers were chosen to motivate and inspire. The fact that these students have chosen this person, speaks volumes about the level of indoctrination they have received. Sorry mess, indeed.
Claudia Balzac
in the last week-
Of all the worthwhile speakers you could have chosen for commencement, you dredge up a remorseless, racist murderer. Perhaps that's all you could get. An 86% transfer-out rate as of 2012, which is the last year reported, and an 8% graduation rate in 2013, down from 14% in 2012, doesn't speak well of your school's ability to meet the needs of your student body. And the commencement "speaker" choice of a smooth talking violent criminal who refuses to take responsibility for his actions, is a poor representative of your demographics.

He isn't "inspirational". He's an inmate, who played the system to avoid his well-deserved meeting with the Magic Needle.
Terry Ryan
in the last week-
If you are looking for a great place to have your child indoctrinated, Goodard is the place for you! This is reflected in the recent choice for a commencement speaker who is a killer. The cause and effect: the students pick such a a despicable human being because they are indoctrinated by the views of their instructors. A quality institution teaches their students "how" to think. Goodard teaches them "what" to think. Quality professors don't tell their students what their personal views are.... and Goodard should be telling that to its professors. If you want your child to develop critical thinking skills, avoid Goodard.
michael Goglia
in the last week-
Felon inmates do not have the right to freedom of speech. The only "right" a felon inmate has is the Constitution's prohibition of cruel and unusual punishment. Other than that, they are property of the state and no longer have a voice. The faculty of this so called "school" are ignorant as are the easily manipulated students. It's apparent that those that can not get into a real university attend this scam of a school.

I truly hope the poor publicity this school has received over the last week will eventually lead to closing their doors in the upcoming weeks/months. It's unfortunate that you have to choose a star in order to publish your review...This "school" deserves no stars. The liberal sickness continues to be the real weapon of mass destruction in today's society.
Glen Keen
in the last week-
If the leadership of this institution felt it was a good idea to allow an incarcerated convicted cop killer to speak at their commencement ceremony, I am convinced that the institution's capacity to operate a place of higher learning is severely lacking, and the same questionable values and judgement is perpetuated throughout the institution. I would be disgusted although not surprised to learn if this was more of a cheap ploy to attract attention and recruit students. Luckily, only 20 young minds were misguided to think this was a proper way "to engage and think radically and critically"
Slee Stack
in the last week-
By inviting a convicted murderer of a Police Officer to be a Guest Speaker to your graduation, you have just exclaimed to the world just how much you 1. Hate White people and 2. Hate the rule of law and embrace criminals. I hope that the petition to de-fund and eliminate your school takes off. Shame on your staff!
Mike Smith
in the last week-
Don't go to this college. I grew up in Vermont and any college that is out in the country beware! Now they are inviting a cop killer to speak to them. Even the prison system is allowing this guy to talk. I guess if one is black they can get away with anything. Goddard College - Don't go to this college. Also Matthew's the one that is connected to UVA student, you should not have run to TX, this VT was your safe haven.
10/6/146:50 PM
❤️ 0

A White man can kill Black man; he's foot-loose and fancy free.  A Black man kills a White man, if he survives, he's condemned forever and a damn day.

Probably at a speaking engagement at one of America's colleges and universities or Klan meetings.

Mumia Abu-Jamal: "The United States is Fast Becoming One of the Biggest Open-Air Prisons on Earth"

Probably at a speaking engagement at one of America's colleges and universities or Klan meetings.

Remember how Zimmerman was going around signing autographs and selling shitty paintings for 100K a piece...

Yeah and some Black man with a questionable case (IDK if he's guilty or not and I really wouldn't care if he is...dude is a Panther) is already punished, got life, is an actual political soldier, can't give a commencement speech?