AFRICANGLOBE - The family of Ramarley Graham, the unarmed teen gunned down by police in his own home, hope that a federal civil suit will offer a second chance at justice that was denied when the criminal case against the police officer who shot Graham fell apart.

The lawsuit, and another filed by Graham’s neighbor who was threatened by police just before the shooting, was cleared to proceed by U.S. District Court Judge P. Kevin Castel Tuesday. Both suits name former Police Commissioner Raymond Kelly and the NYPD as defendants.

“[Officer] Richard Haste should have been indicted,” said Ramarley Graham’s mother Constance Malcolm, referring to the officer who fired the fatal shot at her son almost two years ago. “The courtroom today was packed, which shows people want to see justice done.”

On Feb. 2, 2012, officers from a special narcotics unit chased Graham, 18, from White Plains Road and East 228th Street to his home at 749 E. 229th St. in Wakefield because officers allegedly investigating a drug deal believed Graham had a gun in his waistband.

Officers chased Graham into his home, and Officer Richard Haste fatally shot the teen once in the chest in the bathroom. Police claimed that they recovered a small bag of marijuana in the toilet. No weapon was found.

An initial indictment for manslaughter against Haste was dismissed by Supreme Court Justice Steven L. Barrett on May 15 after he ruled that the Bronx D.A. made an error in instructing the grand jury not to consider the fact that other officers told Haste that Graham had a gun.

Bronx District Attorney Robert Johnson brought the case before a second grand jury. On Aug. 7 it was revealed that the new grand jury did not indict Haste. Sources say the officer gave more emotionally compelling and precise testimony than during the first grand jury hearing.

After the grand jury decision, the U.S. Attorney’s Office announced that it would review whether  Haste violated Graham’s civil rights in the shooting death. That review is still pending, Graham attorney Royce Russell told Castel.

Also pending is the NYPD Internal Affairs Bureau review of the shooting which could determine whether the city also must represent Haste, said the officer’s attorney.

Graham’s family aren’t the only people filing a lawsuit related to the incident that day. Attorney Andrew Hoffman represents Paulet Minzie, the owner of the building where Graham lived as well as her 8-year-old grandson Jyevion Dixon and his father Eric Dixon.

Hoffman alleges that Haste and other officers began pounding on the back door after Ramarley Graham entered the home. He claims police pointed a gun at the 8-year-old to gain entry to the building and also at the boy’s father and Minzie who had exited the shower with just a towel covering her when she heard a commotion.

Hoffman claims that police pointed a gun at Minzie causing her to drop her towel, exposing herself to the male officers and also to urinate on herself. They are suing the city for warrantless entry and trespassing among other claims.

“Officer Haste put his gun in the face of this 8-year-old child and ordered him outside,” said Hoffman.

Castel ordered that the two cases proceed on the same discovery schedule. He also suggested mediation as a possible resolution to the Minzie case and possibly the Graham case. All parties are due back in court on Aug. 1.

“You can never fully compensate someone for the loss of their child,” Russell said. “New York City and the police department officials above Richard Haste need to be held accountable for allowing this tragedy to take place.”

So called "black" man Almost FRAMED to get 5 years
HOW MANY OF OUR BROTHERS THEY HAVE LOCKED UP THAT THEY WERE ABLE TO COVER UP THE EVIDENCE???? Evidence from a dashboard camera on a police cruiser ended a nightmare for a New Jersey man facing false charges of eluding police, resisting arrest and assault. Prosecutors dismissed all the...
2/24/148:32 AM
❤️ 0

HOUSTON – Community activists and family members want to know how HPD can justify the shooting death of an unarmed man last week.

Family and friends along with community activist Quanell-X gathered at the site of 26-year-old Jordan Baker’s death last Thursday.

“Basically I am over come with grief. At this point, I don’t have a lot to say. I do, I love everybody that is here,” Janet Baker said about her son.

This is a situation this family never imagined they would be in – a son, a young father – shot and killed by an officer with the Houston Police Department.

That is something that community advocate Quanell-X says he has seen all too many times.

“He was guilty of only two things –being a young African male wearing a hoodie at night,” the activist said.

Thursday night Baker was shot by a uniformed HPD officer J Castro, working security at the strip center on Antoine and Little York.

There have been a number of armed robberies allegedly committed by young men in hoodies here.

There were no witnesses to the shooting but the officer, an 11 year veteran.

“He wants everyone to believe that Jordan rushed him unarmed with no weapon in his hand, with a cop with a gun in his hand. This don’t make no sense at all,” Quanell-X said.

In a statement, Houston Police Chief Charles McClelland told KHOU 11 News that investigators, “found no weapon,” and added, “any police officer’s decision and justification to use deadly force is not absolute on whether the suspect is armed with a weapon. There is no federal, state law nor police training that requires a suspect to be armed. The justification to use deadly force is based on the officer’s perception given the specific circumstances surrounding the incident.”

Plenty here are skeptical about that.

“We will never know. No one knows the truth but God,” said a high school friend of the victim.

“I am just waiting for justice to be served. Looking to the most-high God,” Baker’s mother added.

Jordan Baker was a student at Houston Community College and had no recent incidents with police. The only two charges he ever faced were both dismissed nearly 10 years ago.

Castro is assigned to administrative duty pending the outcome of the HPD internal investigation.

Anthony Bell’s 47-year-old mother was shot and killed by the Bastrop County Sheriff’s department in Texas.

“I couldn’t even touch her hand or kiss her on the forehead,” said Anthony Bell, whose 47-year-old mom was shot and killed by a 28-year-old Bastrop County Sheriff’s Deputy Daniel Willis. Bell didn’t hear about the death of his unarmed mother until six hours after police shot her.

“I answered the door and there were two investigators there, and they said your mom’s been involved in an accident. I thought a car wreck and he said, no, she was shot by an officer and she died. I just lost it then.”

The sheriff’s department had initially said that Yvette Smith was armed when deputy Willis shot and killed her. But the department later retracted that statement. They were first “unclear whether Smith actually had a gun.”

Now, they seem to acknowledge that Smith was unarmed all along.

A woman had initially called 911, claiming that two men were fighting over a gun inside of a home where Smith was. But witnesses on the scene said there was no gun, the fight was about over one party owing the other money.

The homeowner, however, heard a dispatcher say there was a gun inside the house, even though that was not the case. Deputies were immediately informed that this was not true and that there was no gun inside of the house whatsoever.

That’s when Smith opened the door.

The deputies say, “the woman disregarded all commands.”

But all of the witnesses say this is patently false.

“She was just a loving, caring, genuine person,” Bell said. “You got a mother of two gone. The woman beat cancer, just got out of knee surgery and was battling diabetes. She was 5-foot-5, 135 pounds, and if you find that aggressive then you need to turn your badge in.

“You’re going to have to go back and look at who’s hiring and training these people and what protocols should you follow and what didn’t you follow,” he continued. “You took my mom from me.” 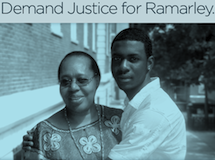 On February 2, 2012, plainclothes NYPD Officer Richard Haste followed unarmed 18-year-old Ramarley Graham to his home in the Bronx, violently broke down his door without a search warrant, and killed him in front of his grandmother and younger brother. Bronx District Attorney Robert Johnson convened a Grand Jury that voted to indict Officer Haste, but a judge threw out the indictment, citing prosecutorial error. A second Grand Jury then refused to re-indict him.

The Department of Justice and the U.S. Attorney's office have the power to take over the case and hold Ramarley's killer accountable. Join us in demanding the DOJ and U.S. Attorney for the Southern District of New York Preet Bharara conduct a thorough investigation and bring federal charges against Officer Haste.

On April 12, 2014, Ramarley Graham would have been celebrating his 21st birthday, but two years earlier he was gunned down in his own home by plainclothes NYPD Officer Richard Haste.

As is so often the case involving Black victims of deadly police violence, Ramarley's killer has not been brought to justice by the Bronx County District Attorney's office. The Department of Justice (DOJ) has a duty to protect our community against racial profiling and the violence that it creates, especially when local or state prosecutors fail to do so.

This case has been under review by the DOJ and the United States Attorney’s Office since last summer. It's time for federal officials to take action. By holding Officer Haste accountable for his deadly actions, you can send a strong message to law enforcement across the country that your office will protect our community against racial profiling and sensless police violence.

We demand that you conduct a full and thorough investigation and bring federal charges against Officer Haste.

Thanks for the petition link. Aside from Ramarley Graham, US AG Eric Holder also has the Alfred Wright case on his desk. Let’s move on these cases!