The religious instruction of the Negroes in the United States 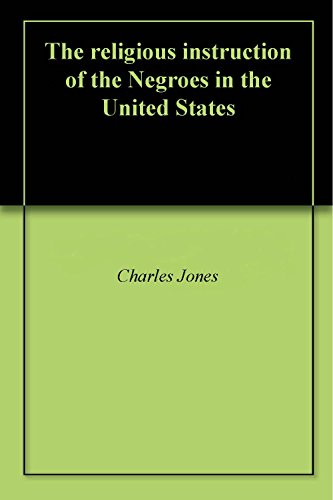 [What will be the benefit of giving enslaved Afrikans christianity ] "It is a matter of astonishment, that there should be any objection at all; for the duty of giving religious instruction to our Negroes, and the benefits flowing from it, should be obvious to all. The benefits, we conceive to be incalculably great, and [one] of them [is] there will be greater subordination . . .amongst the Negros (page 52)." (https://www.barnesandnoble.com...Book#productInfoTabs)

In 1832, a sermon was given in the south entitled, The Religious
Instruction of the Negro. By 1906, Negro church followings increased
57.6 percent. Said another way, enslaved Afrikans were being transformed
into negro christians at alarmingly fast & successful rates. HOW TO MAKE A
NEGRO CHRISTIAN reprints the entire sermon, so you can read it for
yourself and adds highly critical commentary. Read about the exact plans
constructed by one Dr. Reverend Charles Colcock Jones to 'biblize' us-the
enslaved Afrikan population and take notice at what happens on sundays in
the majority of the Afrikan/Black communities today in 2007. Below are a
few choice quotes from the so-called 'Apostle of the Blacks.'

HOW TO MAKE A NEGRO CHRISTIAN
And having our plantations, the time and persons of our servants wholly
under our control, we can arrange the manner and frequency of our
instructions, as we please, and the period of these instructions with as
much punctuality, and with as little interruption, as we can arrange the
morning and evening devotions of our own fire-side. Our very children
might become, to some extent, teachers, by reading to them plain portions
of the Bible, or plain Tracts and things of such sort page 67

HOW TO MAKE A NEGRO CHRISTIAN
Will the authority of the Masters be weakened by instructions of this
sort? No, it will be strengthened. And we believe that their authority
can be strengthened and supported in this way only;for the duty of
obedience will never be felt and performed to the extent that we desire
it, unless we can bottom it on religious principle page 72

HOW TO MAKE A NEGRO CHRISTIAN
It is a matter of astonishment, that there should be any objection at all;
for the duty of giving religious instruction to our Negroes, and the
benefits flowing from it, should be obvious to all. The benefits, we
conceive to be incalculably great, and [one] of them [is] there will be
greater subordination . . .amongst the Negroes. page 52

HOW TO MAKE A NEGRO CHRISTIAN
n order to induce a sense of guilt, [you] must charge upon the Negroes
those particular sins to which they are so much addicted, and expose their
enormity and consequent punishment in the world to come. page 55

HOW TO MAKE A NEGRO CHRISTIAN
[The matter of preaching to the Negroes should] deal much in parables,
historical events, miracles, lives of men holy and profane, as found in
the Bible, and the great and wonderful works of God: all in illustration
of doctrine and practice. He must reason much by illustration. And as the
great majority of them do not read, he should read and explain God's holy
word to them constantly, and as extensively as possible page 83

HOW TO MAKE A NEGRO CHRISTIAN
It becomes us to inquire, if, in the history of the world, any people have
ever been thoroughly christianized, without the employment of their own
agency to a large extent, in diffusing the gospel amongst themselves? I
know of no such people. page 86

HOW TO MAKE A NEGRO CHRISTIAN
Let them [the slave masters] invest a little capital in the minds and
hearts of their people [us Afrikans], and it will prove to all concerned,
a peace-giving and profitable investment for time and for eternity.
“. . . for time and for ETERNITY” page 102

Of course this was to  the benefit and betterment of their oppressors.  My thang is......how long will blacks be bamboozled by a black book they willingly wrap their legs around without QUESTIONING the limitation of black history?  I mean the black book goes back ONLY around 2000 years and yet human existence goes WAY beyond that.......especially African  history.  I guess you have to accept the fact that you are from Africa instead of created merely to be "massa" slave first before you can assume you had history prior to becoming a vassal for slavery.  Plus the whole story "bible slavery" doesn't fit world evolution...it's whimsical and unfortunately hearsay.  Cuz pivotal things in there?  Cannot be done in real life....like?  Walking on water.....turning water to wine....resurrection. Those are "merely" fables made up in "man's" mind to prove some point during that era and to reject that thought pattern now?  Is to reject the base to any "religion."  Especially the three main slaver religions which by the way....ALL participated in human bondage.   So the slave is at a dilemma.  Believe what massa says in the black book or THINK outside of the [eunuch] box.

This reminds me of the present state of India-where the president is attempting to eradicate open defecation plaguing the nation.  In that how can India buy smartphones and country considered high tech but its people still defecate in open fields?  Is that social progress?  So it's the same ideology-how can one be living in progress in terms of the standard of living and technology and yet society as a whole still suffer from the primitive stage of tribal activity?   Therefore, the behavior don't align with the advancement.  As the behavior don't align with believing one way without personally investigating its authencity....it's truth.  To accept it blindly[when one has the opportunity to get a better view].....is to be part of a "zombie" flock.  Which is what we have today in many of our religious sects.  We have the ability to look and seek beyond what has been taught for two thousands....we have the ability to find out the truth. As black people.   Why won't we?

Why are we settling for massa's version of the  story? When we KNOW it's a LIE!!  Those are questions I want answered.