(I have reservations on this, because hasn't it been proven that most newborns' immune systems are so strong that they are often able to fight off the disease anyway?)

A baby girl in the US born with HIV appears to have been cured after very early treatment with standard drug therapy, doctors say.

The Mississippi child is now two-and-a-half years old and has been off medication for about a year with no signs of infection.

More testing needs to be done to see if the treatment - given within hours of birth - would work for others.

If the girl stays healthy, it would be the world's second reported 'cure'.

Dr Deborah Persaud, a virologist at Johns Hopkins University in Baltimore, presented the findings at the Conference on Retroviruses and Opportunistic Infections in Atlanta.

"This is a proof of concept that HIV can be potentially curable in infants," she said.

In 2007, Timothy Ray Brown became the first person in the world believed to have recovered from HIV.

His infection was eradicated through an elaborate treatment for leukaemia that involved the destruction of his immune system and a stem cell transplant from a donor with a rare genetic mutation that resists HIV infection.

In contrast, the case of the Mississippi baby involved a cocktail of widely available drugs, known as antiretroviral therapy, already used to treat HIV infection in infants.

It suggests the swift treatment wiped out HIV before it could form hideouts in the body. 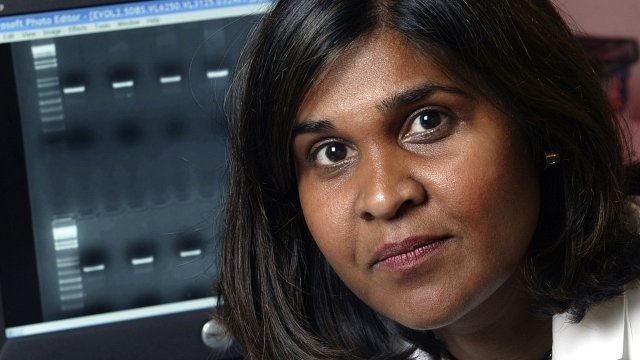 The baby was born in a rural hospital where the mother had only just tested positive for HIV infection.

Because the mother had not been given any prenatal HIV treatment, doctors knew the baby was at high risk of being infected.

Researchers said the baby was then transferred to the University of Mississippi Medical Center in Jackson.

Once there, paediatric HIV specialist Dr Hannah Gay put the infant on a cocktail of three standard HIV-fighting drugs at just 30 hours old, even before laboratory tests came back confirming the infection.

"I just felt like this baby was at higher-than-normal risk and deserved our best shot," Dr Gay said.

The treatment was continued for 18 months, at which point the child disappeared from the medical system. Five months later the mother and child turned up again but had stopped the treatment in this interim.

The doctors carried out tests to see if the virus had returned and were astonished to find that it had not.

Dr Rowena Johnston, of the Foundation for Aids Research, said it appeared that the early intervention that started immediately after birth worked.

"I actually do believe this is very exciting.

"This certainly is the first documented case that we can truly believe from all the testing that has been done.

"Many doctors in six different laboratories all applied different, very sophisticated tests trying to find HIV in this infant and nobody was able to find any.

"And so we really can quite confidently conclude at this point that the child does very much appear to be cured."

A spokeswoman for the HIV/Aids charity the Terrence Higgins Trust said: "This is interesting, but the patient will need careful ongoing follow-up for us to understand the long-term implications for her and any potential for other babies born with HIV."

Great News!!  Hopefully this is the beginning of the end of the epidemic

Great News!!  Hopefully this is the beginning of the end of the epidemic

Isn't that amazing????  But!  Of course, this got me to thinking.  Hummmmm did they have this "cure" all along and now that the medical industry is changing decided to go ahead and "discover" the cure?  Or did they feel especially sorry for this baby and gave it dose overload[knowing it would work]?

You see, I still have a problem with the "cancer" crisis where this disease has made doctors millions of dollars in research and treatment and yachts and mercedes and mansions and vacations.  Can't get that kind of money with a cure....now can we? It's like a medical form of slavery.   So I dunno.  Yes, it's good news!  But then things like this make you kinda skeptical.  Me anyway.

Cuz I know DAMN well doctors can cure a lot of diseases....but!  It doesn't make money sense to do so.

Cuz we being in one of the most advanced countries in the world......many of our people are sick...and dying.  Why?  And those who live in supposedly third world countries are dying not because of disease per se but because of war and land encroachment that bring about disease.  So if they got sick, who will treat them and how will those who are doing the treating GET PAID?

And still it seems those folks in third world countries are living longer than we are  in the darkest midst of all their despair.   So that's why I say there is something fishy with these doctors in America.  Can't trust 'em.  Not even Chavez.  But!

I feel some kind of way about this. Why? This child went through 30 hours of medical treatment of who knows what and authorized by who knows who. Secondly, there is a current cure for HIV, bone marrow transplant. There are currently 3 adults who went through this bone marrow treatment which has eradicated HIV from their bodies. I smell big pharma all over this.