As a Woman of Colour, hate speech falls outside the borders of national origin, ethnicity-color, religion, gender, gender identity, sexual orientation, or disability --when the convo about another person of Colour presents itself. And when Eye hear this language coming from a non-white person of colour, Eye know the real. They either want to dismiss the topic out of denial or they want to gag the person speaking out.

"The United-Independent Compensatory Code/System/Concept Textbook: A Compensatory Counter-Racist Code" by Neely Fuller, Jr. fully defines the fact that me or no other person of colour will ever be guilty of hate speech within our own culture, because we are victims of this system.

So when eye say these 3 people are 'coons' Eye am exposing their symptoms of coonery on a broad scale as a result of pre-programmed indoctrination. Primarily cognitive dissonance and the stockholm syndrome  do a fine job of defining this toxic mindset that engulfs two areas of people activity: law and religion. 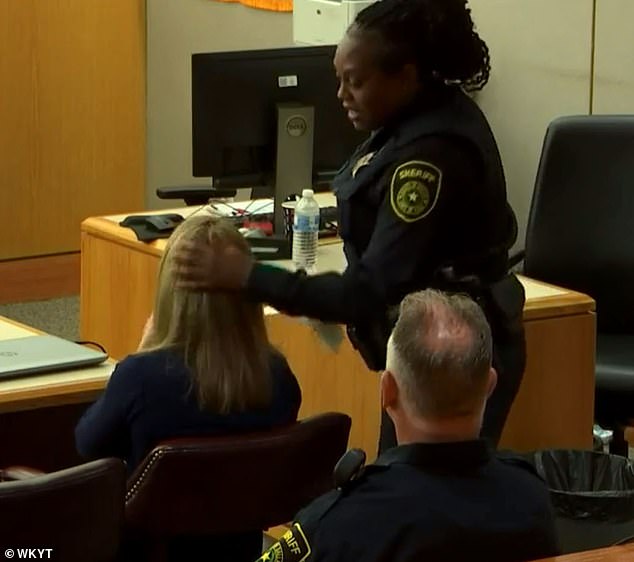 Judge Tammy hugs Amber "alert" and gives her a bible. Before the sentencing occurred Eye watched the Judge huffing a puffing and wondered why. It did not take long to figure out the what, the why, and the who. The judge's actions show that she values Amber "Alert" Guyger's life over Botham Shem Jean....! 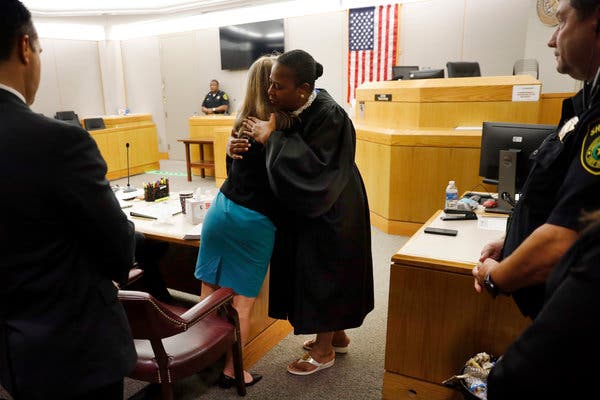 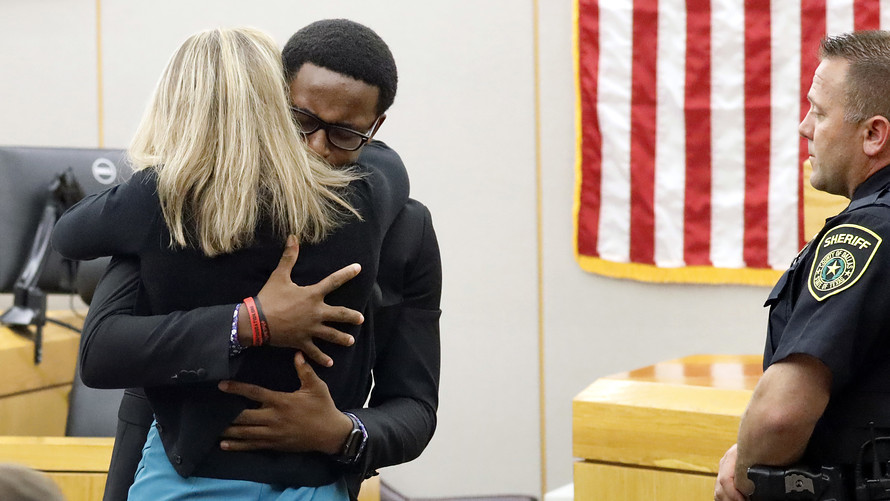 The jury rendered a verdict of 'guilty' yet gave her only 10 years for killing that innocent young man in cold blood --inside his own apartment, smh. (e.g. when she goes to jail they had betta keep her isolated for 10 years because inmates have their own set of rules for cop killers like her.)

A black police officer committing the same type of tactical assault (e.g. she had a taser and mace and could have used these weapons instead of bullets) a white woman would have gotten the electric chair. This 500-year old practice reinforces that Global White Supremacy/Racism is cemented inside the system of the so-called Democracy/Republic that is known as AmeriKKKa.

Since the sentencing it has come out that Amber "Alert" Guyger is a racist in every true sense of the word, which leads me to believe that her tears were all an act.

Guyger was caught up in her own b/s ---smh

The family of Botham Jean plans to file a separate lawsuit against South Side Flats, the apartment complex where former Dallas police officer Amber Guyger fatally shot him, a family attorney said.

Attorney Lee Merritt said Saturday that a confusing layout on the upper floors, coupled with a faulty door mechanism, created circumstances that led to Jean’s death in September 2018.

Jean, 26, was shot inside his own apartment by Guyger, who said she entered his home by mistake, believing it to be hers.

Guyger was convicted of murder on Oct. 1 and is serving a 10-year sentence.

An employee at South Side Flats referred questions to the complex’s corporate owner, Chicago-based Waterton Residential, and its regional manager.

Company representatives had not responded to email and phone requests for comment Saturday evening.

During Guyger’s trial, an investigator testified that Jean’s door was defective.

The base plates and lock plates didn’t line up on some of the doors, Jean’s included, Merritt said.

“The lock would snag and not connect in response to certain types of weather,” he said.

Jean lived on the fourth floor, while Guyger lived directly below. She said she thought she was trying to get into her own apartment at the time. Upon entering, she believed she was confronting a burglar, both she and one of her attorneys said at trial.

Prosecutors said Jean was sitting on his couch in a T-shirt and shorts watching football and eating ice cream when Guyger arrived.

“During the trial, something like 70 percent of the people on the third and fourth floors said that they’ve gone to the wrong floors before,” Merritt said.

Merritt also is appealing a federal court decision that removed the city of Dallas from a civil lawsuit filed by the family.

Jean’s family argued that his death was a result of a pattern of excessive force by Dallas police and that better training could have prevented his death. U.S. District Judge Barbara Lynn disagreed, saying the suit failed to prove the city’s liability.

Guyger’s off-duty status at the time of the shooting also factored into the suit’s dismissal, but Merritt disputes the reasoning behind that.

“When a police officer observes a crime, when she responds to it, she goes back on duty," he said. "They are considered to be back on duty.”

“She came to her door, she heard rumbling inside and she believed she was being burglarized,” Merritt said. “She started offering verbal commands. Clearly now, she’s operating as a police officer. In fact, she used the words, ‘My training kicked in.’"

REMEMBER READING ABOUT THIS?:

The city of Dallas has won a small victory after a federal judge absolved the city of liability in the tragic 2018 killing of a black man.

On Sept. 6, 2018, hearts were shattered when the news of black accountant Botham Jean being wrongfully shot to death by a white off-duty officer in his apartment made headlines across the nation.

The suit, which was filed a month after Botham’s death, stated the Dallas Police Department, “has a pattern, practice, history, and custom of using excessive force against minorities, including approaching them with guns drawn, when there is no imminent threat of bodily harm.”

The two-page order signed Dec. 23 by U.S. District Judge Barbara Lynn, states the city was dismissed “with prejudice [meaning the suit cannot be brought again] for failure to state a claim upon which relief can be granted.”

The Jean family, unwavering in their stance that adequate police training could have prevented Botham’s death, filed an appeal of the dismissal on Dec. 27.

“We feel that the city of Dallas should be in this lawsuit. Should be held responsible for the acts of Amber Guyger,” said family attorney Daryl Washington to local station NBC DFW. “To get this news the day after Christmas was very difficult for the family,” said Washington. “They know we have a fight ahead of us. And they’re just prepared to do whatever it takes to get some type of justice for Botham and their family.”

The French family’s suit alleges the officer “invoked his governmental status to influence the behavior of those around him. Actions of identifying himself as being a police officer throughout the incident was done with the purpose and effect of influencing the behavior or bystanders, plaintiffs and eyewitnesses.”

On Twitter, reactions varied from disappointment to a lack of surprise. Some even felt Jean’s family’s willingness to forgive prompted the city to be let off the hook.

“This is what publicly hugging and declaring forgiveness for murders gets you.”

Though some felt the justice system had already worked in favor of the family with Guyger being sentenced.

“Dallas didn’t kill him. A female cop did..”

“How is the city liable for the actions of an employee that is not on duty?”

“The officer is in prison. Suing the city is just an attempt at a money grab for something taxpayers had nothing to do with.”

Guyger, who was sentenced to 10 years in prison, is now the sole defendant named in the wrongful death civil lawsuit that was filed by the Jean family a month after the tragic killing.

So, since when are Judges allowed to do the Prosecutor's/Defense Attorney/City Attorney's job FOR them in a Court Case?

Maybe, something has been left out, but, isn't it the City's Attorney's Job to defend the city against the lawsuit by presenting the City's defense(s)/affirmative defense(s), and not the Judge's?

.   .   .   But, the obviously blatantly racist act of the judge's Abuse of Authority, andAbuse of Process, in dismissing the suit WITH PREJUDICE .  .  .  . is no surprise.

["The two-page order signed Dec. 23 by U.S. District Judge Barbara Lynn, states the city was dismissed “with prejudice [meaning the suit cannot be brought again] for failure to state a claim upon which relief can be granted.”]

Failure to state a claim upon which relief can be granted is a defense to a legal claim. It means that the claimant has failed to present sufficient facts which, if taken as true, would indicate that a violation of law had occurred or that the claimant was entitled to a legal remedy  .  .  .]

Do you really think there could possibly have NOT been "sufficient facts" that, "if take as true, would indicate that a violation of law had occurred or that the claimant [Botham Jean's family] was entitled to legal remedy"?