Climate change could drive a million of the world's species to extinction as soon as 2050, a scientific study says.

The authors say in the journal Nature a study of six world regions suggested a quarter of animals and plants living on the land could be forced into oblivion.

They say cutting greenhouse gases and storing the main one, carbon dioxide, could save many species from vanishing. 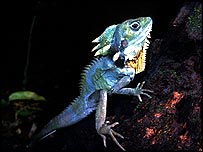 The United Nations says the prospect is also a threat to the billions of people who rely on Nature for their survival.

In a report, Extinction Risk From Climate Change, the scientists describe their study of the six biodiversity-rich regions, representing 20% of the Earth's land area. 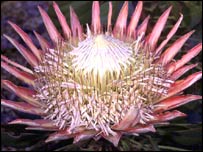 The study used computer models to simulate how the ranges of 1,103 species - plants, mammals, birds, reptiles, frogs, butterflies and other invertebrates - are expected to move in response to changing temperatures and climate.

The scientists considered three different possibilities - minimum, mid-range and maximum expected climate change, on the basis of data from the Intergovernmental Panel on Climate Change.

They also assessed whether or not animals and plants would be able to move to new areas.

They concluded that from 15 to 37% of all the species in the regions studied could be driven to extinction by the climate changes likely between now and 2050.

Species at risk include:

James Wesley ChesterA1
And so these authors "got published." They hve met the demand of their tenure, or the need their resumes.

I will more credence in these kinds of studies when there are consequences for the predictors. By that, I mean people who yell "The sky is falling." should be held to some accountability. Something more than "Ooops. Back to the drawing board."

I saw nothing by the way as to how significant the extinction of one million species is to the overall scheme of things.

Although it is rekatuve to only one species, I kill millions and millions of blades of greas every year.

I know. It's not quite the same

EbonyRoseA1
Well, maybe after we get a new president, we will be able to even discuss doing our part to try to help the environment. But even then, we've got 4 years of damage to dig out of first.

But, I hope one day this will all get better.

'US climate policy bigger threat to world than terrorism'

Tony Blair's chief scientist has launched a withering attack on President George Bush for failing to tackle climate change, which he says is more serious than terrorism.

Sir David King, the Government's chief scientific adviser, says in an article today in the journal Science that America, the world's greatest polluter, must take the threat of global warming more seriously.

"In my view, climate change is the most severe problem that we are facing today, more serious even than the threat of terrorism," Sir David says.

The Bush administration was wrong to pull out of the Kyoto protocol, the international effort to limit the emission of greenhouse gases, and wrong to imply the protocol could adversely affect the US economy, Sir David says. "As the world's only remaining superpower, the United States is accustomed to leading internationally co-ordinated action. But the US government is failing to take up the challenge of global warming.

"The Bush administration's strategy relies largely on market-based incentives and voluntary action ... But the market cannot decide that mitigation is necessary, nor can it establish the basic international framework in which all actors can take their place."

Results of a major study showed yesterday that more than a million species will become extinct as a result of global warming over the next 50 years. Sir David says the Bush administration is wrong to dispute the reality of global warming. The 10 hottest years on record started in 1991 and, worldwide, average temperatures had risen by 0.6C in the past century.

Sea levels were rising, ice caps were melting and flooding had become more frequent. The Thames barrier was used about once a year in the 1980s to protect London but now it was used more than six times a year.

"If we could stabilise the atmosphere's carbon dioxide concentration at some realistically achievable and relatively low level, there is still a good chance of mitigating the worst effects of climate change."

But countries such as Britain could not solve the problem of global warming in isolation, particularly when the US was by far the biggest producer of greenhouse gases on the planet. "The United Kingdom is responsible for only 2 per cent of the world's emissions, the United States for more than 20 per cent (although it contains only 4 per cent of the world's population)," Sir David says.

"The United States is already in the forefront of the science and technology of global change, and the next step is surely to tackle emissions control too. We can overcome this challenge only by facing it together, shoulder to shoulder. We in the rest of the world are now looking to the US to play its leading part."

Advisers to President Bush have suggested climate change is a natural phenomenon and criticised climate researchers for suggesting that rises in global temperatures are the result of man-made emissions of greenhouse gases such as carbon dioxide.

But Sir David says the "causal link" between man-made emissions and global warming is well-established and scientists cannot explain the general warming trend over the past century without invoking human-induced effects.

The Cambridge academic, who was born in South Africa and emigrated to Britain, implies that the US has a moral obligation to follow the UK's lead in trying to limit the damage resulting from rising world temperatures and climate change.

"As a consequence of continued warming, millions more people around the world may in future be exposed to the risk of hunger, drought, flooding, and debilitating diseases such as malaria," Sir David says.

"Poor people in developing countries are likely to be most vulnerable. For instance, by 2080, if we assume continuing growth rates in consumption of fossil fuels, the numbers of additional people exposed to frequent flooding in the river delta areas of the world would be counted in hundreds of millions assuming no adaptation measures were implemented."

President Bush has said more research on global warming is needed before the US will consider the sort of action needed to comply with the Kyoto protocol, but Sir David says that by then it could be too late. "Delaying action for decades, or even just years, is not a serious option. I am firmly convinced that if we do not begin now, more substantial, more disruptive, and more expensive change will be needed later on."

Britain is committed to cutting its emissions of greenhouse gases by 60 per cent from 1990 levels by around 2050 and believes other developed countries, such as the US, should follow suit. Bush officials say that would damage their economy and provide an unfair advantage to the country's international competitors. But Sir David says that it is a "myth" that reducing greenhouse gas emissions makes us poorer. "Taking action to tackle climate change can create economic opportunities and higher living standards," he says.

A spokeswoman for the US State Department said that she was unable to comment directly on Sir David's article.