From Tel Aviv to Rio to London, Black Protest Against Police Brutality Is Catching Fire Although the #BlackLivesMatter movement began following the 2012 death of Trayvon Martin and spread with the 2014 death of Michael Brown in Ferguson, the struggle against police brutality is a global one. And while the Black-led, multiracial protests have been gaining momentum in the U.S., so, too, has worldwide activism surrounding the violence committed against Black bodies.

As protests erupted recently over the killing of Alton Sterling in Baton Rouge, Louisiana, and Philando Castile in the Minneapolis-St. Paul area, Black Israelis have been protesting by the hundreds in Tel Aviv against institutional racism and police violence by the Israeli government.

Arrests were reported in Tel Aviv earlier this month of predominantly young Jewish Israelis of Ethiopian descent. On July 3, protesters attempted to block the nation’s busiest highway, as was reported by David Sheen in the San Francisco Bay View. The Black protesters held signs bearing the likeness of Yosef Salamsa, 22, an Ethiopian Israeli found dead in July 2014 in a quarry after facing police abuse months earlier. As Sheen reported, Salamsa had been approached and tasered by police without warning. He and his family faced death threats after filing a report with the authorities, and after he was found dead, the government refused to allow the family to identify his body before burial.

As Atlanta Black Star reported, protests erupted in Israel in May 2015 after a video was shown of a white police officer assaulting Damas Pakada, a Black Israeli soldier in a Tel Aviv suburb. Police arrested Pakada and detained him overnight, releasing him only after the video footage went viral. Thousands took to the streets and were met by riot police.

Although police brutality has proven an important part of the protests, Black activists in Israel are railing against a host of discriminatory practices by the government in housing, education and the military, and a state program in which Ethiopian women were forced to take injections of the contraceptive Depo-Provera. As a result, the Ethiopian-Israeli population dipped 20 percent. Activists regard this as a form of genocide, in a nation that does not want more Black people. And while a year has passed since the protests against anti-Black racism began in Israel, the press and the greater white society do not seem to care. Meanwhile, Prime Minister Benjamin Netanyahu has failed to make changes he promised to the Ethiopian community, just as Israel seeks observer status in the African Union.

Meanwhile, this month people marched in London, Berlin and Amsterdam holding #BlackLivesMatter signs and chanting, “No justice, no peace,” as CNN reported. Around 1,000 people stopped traffic in Brixton in South London, as protesters chanted “Black lives matter” and “hands up, don’t shoot,” according to The Guardian. Brixton is known for the 1981 Brixton Rising, in which a bloody confrontation took place between police and Black protesters, amid socioeconomic problems, high unemployment and police stop-and-frisk policies facing the Afro-Caribbean population. As BBCreported, over 300 people were injured in the 1981 uprising, with millions of pounds in property damage, leading to calls for community policing in Black neighborhoods. 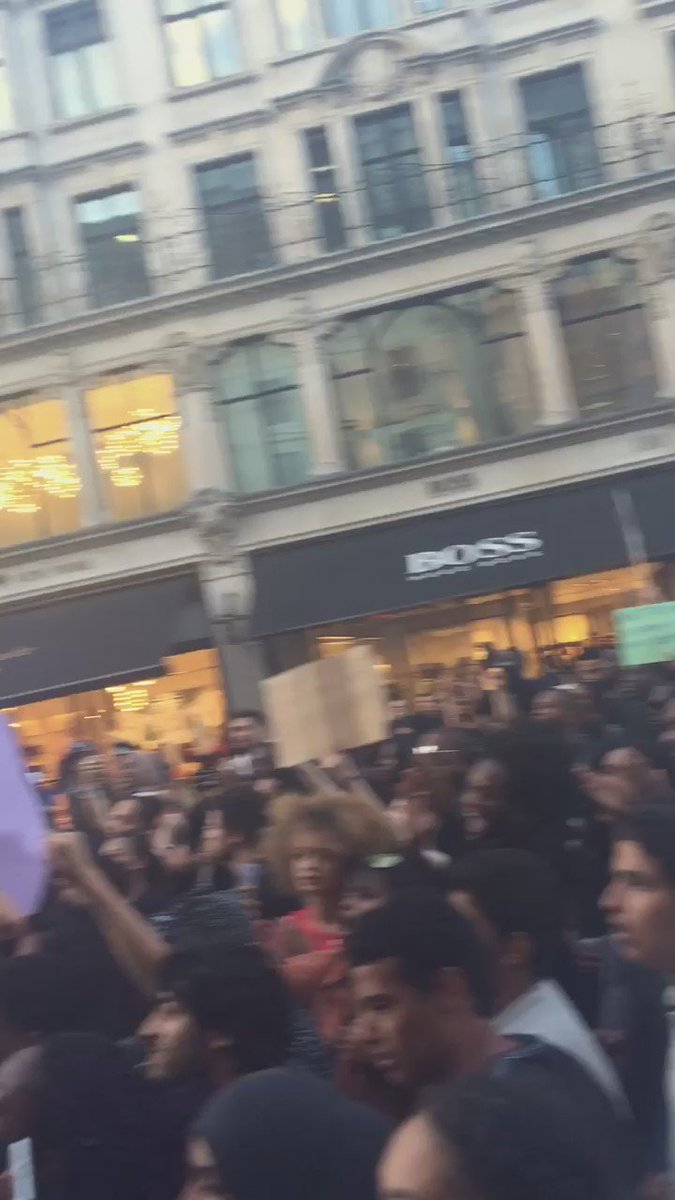 This is for our brothers and sisters in the states. From London. We here youStop police brutality #blacklivematters

Further, protests were held in Birmingham, England, including a rally outside a police station. Activists demanded a prosecution in the death of Kingsley Burrell, 29, who died of cardiac arrest in March 2011 after he was arrested, handcuffed and restrained by West Midlands police and left on a hospital floor for hours, according to The Guardian.

But Black lives also matter in Canada, a country where racism exists despite the perception that Black folks have it better up north than south of the border. As the Toronto Star reported, in recent weeks, thousands have assembled for actions in Vancouver, Edmonton, Winnipeg, Ottawa, Montreal, Halifax and Toronto to “publicly express sadness and opposition to anti-black police brutality and the impunity that too often follows.”

“What most Canadians do not appreciate is that we too have a tragic trend of black men who have been killed by police with impunity, and thus who could be just as easily memorialized with their own haunting hashtags. Think, #AndrewLoku, #JermaineCarby, #AlexWettlaufer, #KwasiSkene-Peters, #Jean-PierreBony, #IanPryce, #FrankAnthonyBerry, #MichaelEligon, #EricOsawe, #ReyalJardine-Douglas, #JuniorAlexanderManon, just to name a few names since 2010,” wrote Toronto-based lawyer Anthony Morgan in The Star.

And just days before Rio de Janeiro is set to host the 2016 Summer Olympic Games, Black Lives Matter activists from the U.S. traveled to the city to march with their Brazilian counterparts and protest against police violence. About 200 protesters gathered for a march and ceremony at Candelaria cathedral, where in 2003 off-duty police killed eight sleeping children and teens on the church steps, asAOL News reported. Through May 2016, 322 people died in conflicts with Rio police, reflecting a 5.6 percent increase over last year. According to Human Rights Watch, police have killed over 8,000 people in the state of Rio de Janeiro over the past decade, three-quarters of them being Black males. Further, in Brazil, a majority-Black nation, law enforcement is responsible for a “significant portion” of the nearly 60,000 violent deaths each year, according to a United Nations report.

A presence of 85,000 police and soldiers is expected for the Olympics, which take place from August 5-21.

“It’s important that we stand with each other because we know this violence is connected,” said Daunasia Yancey, a Black Lives Matter activist from Boston, according to The Washington Post. “Anti-black violence is global and our resistance is global.”

Share on FacebookShare on Twitter
Join us in our effort to change our world with Empowering Narratives. Share this empowering narrative on your social network of choice and ask others to do the same.
7/25/1611:04 AM
❤️ 0
Original Post

Maybe this is what it's going to take to finally UNIFY THE BLACK RACE, to bring the ENTIRE BLACK RACE back together.

Maybe this is what it's going to take to make the Black Race 'WAKE THE "F" UP' and stop allowing non-Black 'Powers and Principalities' to continue getting away with splintering the Black Race into tiny little groups that can be easily influenced, brainwashed, 'socially conditioned', exploited, conquered, ruled over, and murdered.

#‎BlackLivesMatter‬ takes the fight to Brazil

Yeah, we think we have race problems, Brazil's are much worse. The world is watching us, following our example, we are the leaders in Black Liberation, BLM is leading the way. BLM = Black Liberation Movement

We are 7 billion I.N.D.I.V.I.D.U.A.L.S. Once upon a time every fuckin' one of us was a newborn. Right now, every one strip down to complete nudity. Everyone has the same equipment except the freaks with both, some with a lot, some with a little, some with itsy bitsys. We're just fucking PEOPLE. We look the way we do because of our parents hookup where you flew from one and hooked onto the to the egg for 9 months. THAT'S IT!!!! What we're all dealing with now is varying degrees of crazy every one has become touched with as they've matured. You're the COLOR of your parents. Who in the fuck can help that? You hair's straight, good for you; less problems combing. A little spritz of something and away you go. Maybe you look good, pretty or ugly as fuck. It's all in the eyes of the beholder. Some of us have to roll over ours with a tractor. That's OUR BUSINESS and some of us do a damn good job.

This superiority bullshit is in the minds of the snow ball colored INSANE. Everybody's born, they're living their lives in all kinds of ways, good, bad, nasty as fuck, homeless, wealthy beyond reproach, whatever. You'll live and then all our asses will be D.E.A.D. That's what all of us do on this planet. No one's special.

These cops are white men out of their racial minds. They fear the black man. He looks like a gorilla to him; he's afraid of repercussions from the Slave Trade Bullshit. His parents instilled racism into him when he was a little blonde-haired tot. Who the fuck knows. He's Charles Manson on Steroids when he sees one of our sons and our daughters too.

There are white people in the back woods of the south, they're so damn dumb and ignorant, no teeth, look like they're still going to outhouses; talking about guns and killing; probably hunting; you need a translator when they talk to know any semblance of what they're saying. There are black people down yonder, the same way. That happens because no one's reading books or didn't go to school, who knows???

All I know, all our bodies function the same. We sit on toilets, we pee, we bleed, we get sick, we catch diseases, we die. That's not SUPERIORITY ugly old Albino; that's just living. No matter how much luxury you have, when you go you'll have something to leave to your kids; others aren't as lucky. We all breathe, asshole, or we don't. What you do is THINK YOUR GOD and try your damndest to CONTROL and CONTROL you do, with GUNS AIMED EVERY FUCKIN' WHERE.

You have the go ahead to slaughter cows, chickens, people, because you have someone that tells you that's OK, and off you go. You know if YOU kill someone as a COP, FBI, CIA, HIJ, KLM, NOP, QRS, TUV, WXYZ; nothing's going to happen to you because the YT's in control have your ass. And will send you millions to keep you living large when no longer charge. YOU'RE A CAUCASOID GANG FROM ENGLAND. That's all you are.

The African living here, knows that's not the treatment he'll get. It will more than likely be Slave Patrol Cages or Death. All that happens because you conrol things with GUNS AIMED, BOMBS READY TO DROP. DRONES. NUCLEAR BOMBS READY. If you didn't have that shit, all of HUMANITY WOULD FLATTEN YOUR ASS WITH HAND-TO-HAND COMBAT. The Rock's not the ONLY big, bad, SIBERIAN NIGGEROO, there's plenty more where he came from.

You keep shooting us down like dogs, you're gonna run into them when you're NOT PAYING ATTENTION WHILE FOCUSED ON SOMETHING ELSE. (Possibly to kill.)

BIG AND BAD DOESN'T STAY BIG AND BAD FOREVER; GRANTED THERE'LL BE HEAPS OF WORLD-WIDE DAMAGE, BUT IF YOUR ASS EVER DISAPPEARS AND THERE'S JUST TWO LEFT TO CELEBRATE; CELEBRATE THEY WILL!!!!!!