Hillary Clinton is a bigot who sees people of color only as votes, not as human beings worthy of a better future. She’s going to do nothing for African-Americans, she’s going to do nothing for the Hispanics. She’s only going to take care of herself, her husband, her consultants, her donors. These are the people she cares about. She doesn’t care what her policies have done to your communities. She doesn’t care.

Remember this: You’ve had her policies, Democrats, running some of the inner cities for 50, 70, 80, even over 100 years. And look what you have right now. Poverty, no education, crime. You can’t walk down the street with your child. We’re going to fix it, we’re going to fix it.

Clinton responded on CNN shortly after the rally, saying Trump has taken “a hate movement mainstream ... [and] brought it into his campaign.”

Trump’s comments, part of his prepared remarks, strengthened accusations he made earlier this month at a rally in Wisconsin, where he said Clinton was “pandering” and talking “down to communities of color.”

Trump didn’t elaborate on his own strategy to attract minority votes.

He repeated a promise on Monday to deport millions of undocumented immigrants “so fast your head will spin.” But as he continues to tumble in polls, Trump appeared tosoften some aspects of his immigration proposal in an interview with Fox News host Sean Hannity earlier this week.

Trump’s statement on Wednesday appeared to shock some of his supporters in Mississippi, including a woman just behind his right shoulder.

There's no such thing as "MINORITIES." I not "less than" anyone, I have melanin in my skin and have hair that can go either way I choose. If people with melanin want fuckin' help, they're going to have to find a way to unify and help each other. This a HOSTILE land we all find ourselves in. There's something wrong with these EUROPEANS that control every move we make and if the move's incorrect, it's cages or death. Who the FUCK ARE THESE PEOPLE? All they do is cause trouble when people go against their ways.

They want to put a pipe line in Sacred Native Territory. The Natives do not want the pipe line. Why can't you say NO to these fuckers?  Don't they have enough money? Who the hell can bathe and drink OIL? Maybe they can, since they don't seem to have a smidgen of humanity in the entire GANG OF THEM.

All of you need to go somewhere, where the people of color in the entire world can breathe for a year or two. You're becoming unbearable. If there's any such thing as a "MINORITY", it is YOU. There are less of YOU than all of us. You're the ALBINOS of MAN-KIND. 'Fess up!!!

Every single white nationalist group in the US very strongly backs Trump. None back Clinton.  All the money in the world cannot hide the gaping hole hole in his Cheetos soul. 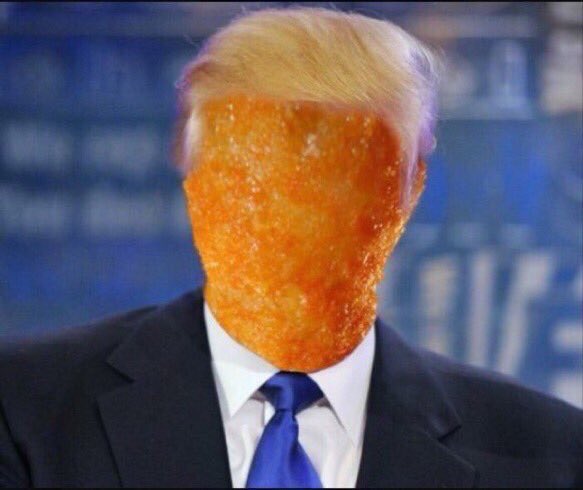 Donald Trump Thinks He Could Win 95 Percent Of The Black Vote. Here’s One Huge Reason He Can’t.

His choice for a new campaign chief executive says everything you need to know.

WASHINGTON ― Donald Trump believes that he can see the future.

While speaking to a mostly white crowd in Dimondale, Michigan, last week, the Republican presidential nominee said that he would gain 95 percent of the black votewhen he runs for reelection in 2020.

This vision is far-fetched. Two days before Trump clairvoyantly looked toward 2020, he appointed Stephen Bannon, executive chairman of Breitbart News Network, as the chief executive of his campaign ― an acquisition that counters Trump’s newfound desire to increase his dismal appeal with African-American voters.

Here’s a look at how the site, which has grown into a refuge for white supremacists, covers cop killings of black people, crime in black communities and the Black Lives Matter movement.

Breitbart has a tendency to blame victims of police violence for their own deaths.

Contributor James Pinkerton published an article on the site earlier this month about gentrification, painting gentrifiers as good Samaritans helping clean up crime. He included a dig at Black Lives Matter, a movement against racial violence that the site often deems “radical” ― before holding black victims of police violence responsible for their own deaths.

Yet we can note that none of the deceased were choirboys.  Eric Garner, for example, had been arrested 30 times. As for Laquan McDonald, as a juvenile, he had “a history of arrests for drugs and petty crimes,” and on the night he died, he was seen breaking into cars; he was shot with a knife in his hand. As for Freddie Gray, he, too, had a long rap sheet ― a total of 18 prior arrests. And as for Michael Brown, at age 18, he had no known arrest record, but he was videotaped committing a crime just minutes before he was killed ― a death that even Barack Obama’s Department of Justice ruled was “justifiable homicide,” that is, self-defense on the part of the policeman.

Shifting liability from the officer to the victim is fairly common whenever people ― especially black people ― are killed by the police. Bringing up a victim’s criminal record confuses how the justice system works in this country ― we actually don’t want cops handing out death sentences for petty crimes. It also paints black people broadly as criminals who deserve to be killed, and bolsters the assumption that the officer was justified in shooting these (usually unarmed) victims. And, it implies that it isn’t on the police to stop killing people. Rather, it’s up to citizens to figure out how to not get themselves killed.

Instead of focusing on the many efforts across the country to bring down the number of people killed by police, Breitbart seems far more concerned with the fictional “War On Cops” and depicting Black Lives Matter activists as having “cop-killing heroes.”

Of course, Black Lives Matter has never condoned violence against police, and being a cop is no more dangerous now than it was before this new wave of protest against police violence.

The stories found under Breitbart’s “black-on-black crime” tag have one focus: arguing that crime in black communities is the main ― and perhaps the only ― problem in black Americans’ lives.

One article lists fatherless homes and crime as warranting more collective outrage than the backlash against the lack of diversity in the 2016 Academy Award nominations. Another questions “where were these Black Lives Matter protesters” following the death of 9-year-old Tyshawn Lee, a black child who was shot and killed by a black man in Chicago, before listing five reasons why black people should be more concerned with crime in black neighborhoods.

Being angry about “black-on-black crime” and protesting racial injustice are not mutually exclusive. Black activists in Chicago, and elsewhere, have always protested the high rates of violence in their communities. The notion that black people aren’t concerned with crime is out-of-touch, and shows faux concern for what happens in black neighborhoods when the media isn’t around covering large-scale protests against police violence.

Plus, bestowing a separate moniker on crime in black neighborhoods when we call “white-on-white crime” simply “crime” is pretty racist. In fact, most homicide victims are the same race as their killer, according to FBI statistics. That’s because people typically commit crimes where they live, and our nation is still woefully segregated.

When black Baltimoreans took to the streets of Charm City to protest 25-year-old Freddie Gray’s death in police custody, things got a little heated. Some protesters threw bricks at police, others broke windows of cop cars, and a handful played a role in burning down a local CVS.

But instead of contextualizing this response to Gray’s death, former Breitbart Editor-in-Chief Ben Shapiro decided to list five “leftist myths about what drives race riots,” dismissing racism as a factor altogether.

“Modern race riots do not occur because of the supposed white superstructure or a legacy of governmental underservice,” Shapiro said at the end of his piece. “They occur because valueless rioters act in valueless ways. Baltimore is evidence that glossing over lack of values with leftist pabulum about social justice doesn’t stop cities from burning.”

Most of Breitbart’s coverage on the protests, listed under the “Baltimore Riots” tag, focused on demonizing the city’s black residents and suggesting that the destruction of property is just as big a problem as police shooting unarmed people dead in the streets. This is another common refrain when black protesters mobilize against police violence ― focusing on any damage protesters caused instead of remembering what sparked the protest in the first place.

Another piece characterized the Black Lives Matter activists who interrupted the 2015 Netroots Conference as a “shouting, rude mob” ― a common media theme that connects blackness with unruliness, violence and trouble. When Jesse Williams delivered a scathing speech indicting systemic racism at the 2016 BET Awards in June, another Breitbart article condemned the actor and activist for not commanding black people “not to use the N-word; not to glorify violence; or to honor cops protecting black communities” instead of reckoning with his message.

So why did Trump choose this guy?

Much of Breitbart’s coverage implies that all black people live in crime-ridden, impoverished neighborhoods. Disturbing stereotypes about black people are more likely to be shared by Trump supporters, and they discount the reasons behind high crime rates in some black communities.

With the site showing no signs of slowing on this type of coverage, it’s hard to figure out how Trump thinks appointing Bannon was a good idea. Then again, it’s not clear whether the GOP nominee actually wants to win this election at all.