Private prison companies are making a killing off today's broken and discriminatory criminal justice system. Industry giants like CCA and GEO Group rake in billions in profit each year from locking disproportionately Black and brown people in some of the country's most dangerous prisons. In order to maximize profit and keep the industry alive, private prison companies have successfully lobbied for years to expand failed criminal justice policies responsible for today's mass incarceration crisis.

But we have the power to stop this. Private prison companies need investors in order to operate and grow. Let's convince investors that private prisons are bad business. Please join us in urging the shareholders and board members of the private prison industry to divest and dissociate from this shameful business.

Click to read the original email we sent to members about this campaign.

Here's the message we sent to our members. After you’ve read it, please add your voice.

The United States incarcerates more people than any other country in the world, and the private prison industry is making a killing off this broken system. For-profit prison companies get paid for each person that fills their cells — raking in $5 billion in annual revenue.1 Empty beds mean lost profits, so to keep the money flowing the industry spends millions lobbying the government to expand the destructive policies that keep more people behind bars for longer, harsher sentences.2

Tragically, one-third of all Black men will spend part of their lives in prison.3 Meanwhile, for-profit prisons promote and exploit mass incarceration and racial-bias in the criminal justice system — further accelerating our nation's prison addiction. We can stop this. The prison industry depends on corporate backers for the capital it needs to keep growing,4 and allies in government for contracts that fill their prisons. If we convince enough investors and board members to leave the industry, we can discredit incarceration as a business, bring attention to the harm it creates, and deter public officials from granting contracts to prison companies.

Please join us in urging investors and board members of for-profit prison companies to get out of this exploitative business. We'll inform them of what they're involved in, and if they refuse to do what's right, we'll hold them publicly accountable.

Federal agencies and state governments contract with three main companies to lock people up: Corrections Corporation of America (CCA), GEO Group, Inc., and the Management and Training Corporation (MTC). The top two prison companies, CCA and GEO, are publicly traded and financed by investors, major banks and corporations, who hold shares in the industry.CCA and GEO Group make money by charging a daily rate per body that is sent to them — costing tax payers billions for dangerous, ineffective facilities.5 The industry also makes money by avoiding tax payments. CCA will dodge $70 million dollars in tax payments this year by becoming a real estate investment trust (REIT) and designating their prisons as "residential".6

In order to maximize profits, prison companies cut back on staff training, medical care, and rehabilitative services — causing assault rates to double in some private prisons.7 A 2010 ACLU lawsuit against CCA-run Idaho Correctional Center cited a management culture so violent the facility is known as the "gladiator school".8 The industry also maximizes profits by lobbying for and benefiting from laws that put more people in jail. In the 1990's CCA chaired the Criminal Justice Task force of shadowy corporate bill-mill, the American Legislative Exchange Council (ALEC), which passed "3 strikes" and "truth in sentencing" laws that continue to send thousands of people to prison on very harsh sentences.9 Black folks are disproportionately subjected to these uniquely harsh conditions due to our extreme overrepresentation in the private prison system.10

In many parts of the country, the political tide is shifting against the for-profit prison industry. Earlier this summer, Kentucky, Texas, Idaho, and Mississippi broke ties with CCA after reports of chronic understaffing, inmate death, and rising costs to the states became undeniable.11 In April, New Hampshire rejected all private prison bids because the prison corporations could not show that they would follow legal requirements for safely housing prisoners.12 And, there is growing opposition to California Governor Jerry Brown's misguided plan to comply with a Supreme Court order to alleviate the State's prison overcrowding crisis by moving thousands of prisoners into private facilities, at a public cost of $1 billion over 3 years.13

The private prison industry should not control who is locked up, for how long, and at what price. For-profit prison companies have investors that cut across many industries. Some of these investors — wealthy individuals, major banks and financial companies — know exactly what they're doing. But with enough pressure, they might reconsider whether it's worth being known as profiting from exploitation and racism in the criminal justice system.

Profiting off the brutality and discrimination of incarceration is shameful. Please join us in calling on the investors and board members of for-profit prison companies to get out of this corrupt business.

Help support our work. ColorOfChange.org is powered by YOU—your energy and dollars. We take no money from lobbyists or large corporations that don't share our values, and our tiny staff ensures your contributions go a long way.

3. "1 in 3 Black Men Go To Prison? The 10 Most Disturbing Facts About Racial Inequality in the U.S. Criminal Justice System," AlterNet, 03-17-2012
http://www.alternet.org/story/...minal_justice_system

7."The Dirty Thirty: Nothing to Celebrate About 30 Years of Corrections Corporation of America," (.pdf) Grassroots Leadership, 06-01-2013
http://grassrootsleadership.or...ormatted_for_web.pdf

10. "The Color of Corporate Corrections: Overrepresentation of People of Color in the Private Prison Industry," Prison Legal News, 08-30-2013
https://www.prisonlegalnews.or..._displayArticle.aspx

Tell the private prison industry: Black bodies are not for sale 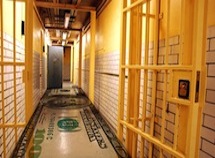 For-profit companies are making a killing from our broken prison system — raking in billions from longer and harsher terms of confinement that disproportionately locks up Black folks and immigrants. Private prison conditions are some of the most dangerous in the country. In order to maximize profits, companies like CCA, GEO Group, and MTC cut back on staff training, medical care, and rehabilitative services, while spending millions lobbying governments to keep their prisons filled at a high cost to taxpayers and public safety.

We can stop this. Please join us in urging investors and board members of for-profit prison companies to get out of this exploitative business.

Dear President/CEO and Board,

I am writing to ask you to reconsider your stake in the private prison industry. Private prisons are a dangerous and exploitative business. The United States incarcerates more people than any other country in the world, and tragically, one-third of all Black men will spend part of their lives in prison. For-profit prisons promote and exploit mass incarceration and racial-bias in the criminal justice system — further accelerating our nation's prison crisis.

For-profit prison companies get paid for each person that fills their cells — profiting from longer and harsher periods of confinement. This business model incentivizes a disregard for public safety, justice, and rehabilitation in the interest of increasing profit margins. To make matters worse, inadequate staff training, low wages, and insufficient resources make these some of the most dangerous workplaces in the country.

Profiting from incarceration is shameful. In many parts of the country, the political tide is shifting against the for-profit prison industry. States across the country are realizing the true price of private incarceration — chronic understaffing, inmate death, and rising costs to states. Kentucky, Texas, Idaho, New Hampshire, and Mississippi have all broken ties with private prison corporations and the number is rising every day.

I urge you to immediately stop supporting an industry that profits off the exploitation and racism of the criminal justice system.

Attention all "Black" men (or whatever they're calling you minute-by-minute) stop doing the cazillion things that keep getting your "black" behinds LOCKED UP in these damn prisons.  That might be a wonderful start. "They" sure as hell didn't build these dungeons for themselves; they're for YOU!!!!!

You mean the cazillion things like driving a nice car, walking down the street and shopping at Macy's or Barney's???

and the biggest offense... Being a Black Man???