10 Things to Know About What Happened in Michigan On Thursday 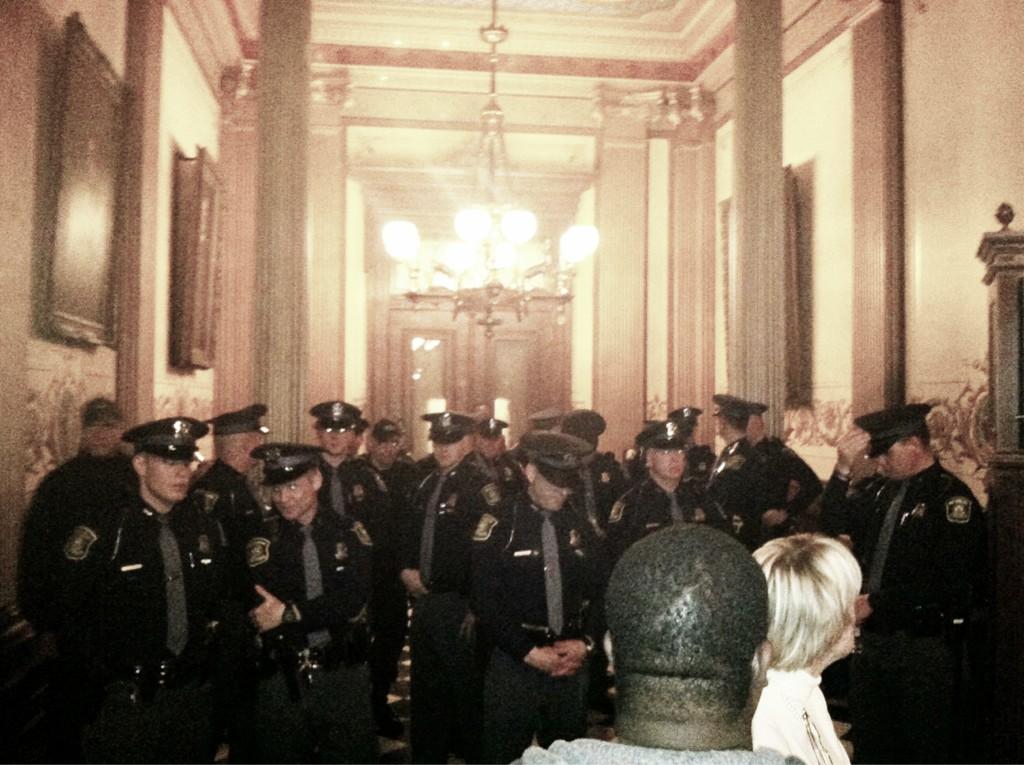 1.) The Michigan House and Senate yesterday passed so-called “right to work” bills.“Right to work” laws effectively defund the ability of workers to have a voice at their workplace. In 23 other states, these laws have lowered wages, weakened benefits, raised the poverty rate, and led to increased workplace injuries and deaths. The House passed one such bill and the Senate passed two.

2.) Republican leaders in Michigan were not honest about their intent. The morning began with Governor Rick Snyder reversing his earlier position on the “right to work.” He had previously said that the bill was “not on his agenda,” and that it was a divisive issue – but then yesterday, he suddenly urged the House and Senate to pass the bill and said he would sign it when it reached his desk. Similarly, Senate Majority Leader Randy Richardville previously opposed “right to work,” but expressed support for it on Thursday morning.

4.) There was no floor debate concerning the bill. Another highly unusual move, considering the high profile “right to work” bill. But Republicans took advantage of their majority by ending debate on the bill before it started.

6.) The public was not allowed inside the Capitol Building to observe the proceedings. Republican House Speaker Jase Bolger locked down the Capitol, locking approximately 3,000 Michiganders outside. It took a court order requested by Democrats to get the building opened again, but even then the Republican-controlled House did not pause their proceedings.

7.) Police arrested and in some cases used pepper spray on several individuals outside the building. These were Michiganders seeking to exercise their constitutional rights to assemble.

8.) The “right to work” bill is rigged so that it can’t be repealed. Republicans inserted a $1 million appropriation on the bill, which under Michigan law precludes it from being overturned by a citizen referendum. As blogger Chris Savage wrote, “not only was there no opportunity for public input before the bills were voted on, there will be none afterwards, as well.”

10.) Time is short. Democrats put a “procedural speed bump” on moving the Senate bills to the House by one day, and there is a five-day mandatory waiting period before the House can take action.

Does all this undemocratic behavior make you mad? Us too. So here are 4 things you can do about this right now:

1.) Please join over  8,500 advocates for working families by signing and sharing our petition to Gov. Snyder and the Michigan legislature.

2.) If you are in Michigan, you can call your State Senator now using our “click-to-call” system. Even if you don’t know who your Senator is, you can enter your address and get connected to the right person

3.) Join the #SaveMI Thunderclap by connecting your Facebook and Twitter accounts to spread the message about what’s happening in Michigan.

Follow@WorkingAmerica and @MIAFLCIO for updates, read Chris Savage’s excellent blog, and tweet with the hashtag #SaveMI.

Last Thursday, Michigan legislators passed one of the most anti-worker pieces of legislation the state has ever seen — a so-called Right to Work bill. It jeopardizes the livelihoods of working families throughout the state, particularly families of color.

After the legislature meets for a final vote, Governor Rick Snyder will decide this week whether to sign the bill into law. We need you to stand with our brothers and sisters in Michigan by urging the Governor to veto the legislation.

Contact Governor Rick Snyder and tell him he must veto any Right to Work legislation that reaches his desk. His number is: 517-373-3400

For more than a century, labor unions and the NAACP have worked together to help form the backbone of the middle class. But this Right to Work bill will reverse all our hard work: gutting the power of working families, lowering wages, and decreasing access to education and healthcare.

Everyone will be impacted, there's no two ways about it. Teachers, nurses, public safety workers, automobile workers, clergy, and so many others will be left without power on the job if this bill passes.

And it won't only be union members, either. Workers in Right to Work states make on average $1,500 LESS per year, and studies have shown other state economies stagnated after passing similar bills.

We know who is behind these attacks. They are the same people who tried to take away your right to vote. We didn't stand for it then, and we won't stand for this new assault on working families now.

You have the power to stop this. Tell Governor Snyder to veto the Right to Work legislation:

Many thanks for your support.

PS: Please make sure you forward this message to everyone you know.

1. The Michigan House passed HB 4003, the “right to work” for public workers. The vote was 58-51. Six Republicans once again joined all the Democrats to vote no.

2. The Michigan House also passed SB 116, which is the Senate version of “right to work” for private sector workers. The vote was 58-52. If the same vote had happened in January 2013 with the new legislature, assuming all incoming Democrats opposed the bill, it would not have passed.

3. More than 12,500 union and non-union protesters made their voices heard at the Capitol. 12,500 is the official turnout from the Capitol Committee, but other estimates have the number higher. Either way, this constituted the largest public gathering ever at the Michigan State Capitol in Lansing.

5. Protests were peaceful, but Fox News doctored footage to implicate protesters in violence. Editors at Fox News compiled footage from events that actually took place hours apart, including the takedown of a Koch-funded group’s tent that had remained empty most of the day. Anecdotal reports from the ground were that the protests were peaceful, and that most were concerned about what the “right to work” law would mean for their future. (Chris Savage has more on how the Fox News footage was manipulated.)

Here’s a chart comparing the language side by side.

7. Governor Rick Snyder signed the “right to work” bills yesterday behind closed doors. Snyder told the Detroit Free Press that the issue was “divisive” and that he didn’t see the need for public ceremony. He said: “It’s one of those things, there were a number of people out protesting. So I don’t see the need to have a public ceremony to over-emphasize that.”

8. As he signed the anti-worker bill, Governor Snyder blamed workers themselves for his reversal. In the 2012 election, Michiganders collected signatures to get a constitutional amendment protecting collective bargaining rights on the ballot, referred to as Proposal 2. The ballot measure failed, but Gov. Snyder used it yesterday as an excuse to flip on “right to work.” He said: “I don’t believe we wouldn’t be standing here in this timeframe if it hadn’t been for Proposal 2 moving ahead.” He did not mention the enormous financial support he’d received from Dick DeVos and the Koch brothers, who ideologically oppose union rights and benefit financially from their absence.

Does this make you mad? Here’s how we recommend you take action:

1. Join Working America. Seems like an obvious request for us to make. But Working America is the place where non-union workers can organize and build solidarity around issues like workers’ rights, jobs, health care, education, and retirement security. Joining our movement of over 3 million members takes only a minute.

2. Spread the word. The name is deceptive. But here are the facts: “Right to work” laws lead to lower wages, lower rates of health insurance, higher poverty rates, and more workplace injuries and fatalities. You can learn more facts at WrongforEveryone.com and share infographics likethis one.

3. Stay tuned. There is a possibility Michigan citizens could repeal the “right to work” bill by astate ballot initiative. We will be providing more information as we learn more about his option.

Sign In To Reply
Post
I Can't Breathe': Man Dies After Minneapolis Police Officer Seen Kneeling On His Neck
14 hours ago

Corona Virus: The Truth
14 hours ago

Educated Black Women Think They Are Better Than Blue Collar Men.
17 hours ago

A little laugh brought to you by Spice Adams... "Oldheads As Soon As Their Song Comes On"
2 days ago

"I was happy on my wedding day/I didn't know that I would pay"...RRSOTD
2 days ago