Viola Desmond, famed for challenging racial segregation in Canada, was unveiled last Thursday as the face of Canada’s new $10 bill.

On Nov. 8, 1946, Desmond walked into the Roseland Theater in Nova Scotia province of Canada and sat in the whites-only section of the theater. The designated area for blacks at the time was the main floor to the balcony. Desmond had to be dragged out of the theater because she refused to move to the balcony. A black Nova Scotian, Desmond was convicted of a one-cent tax violation, the difference between the seat she paid for and the seat she sat in, which was more expensive.

Referred to as Canada’s Rosa Parks, Desmond passed away in 1965 at the age of 50. She was awarded a posthumous pardon by the government of Nova Scotia in 2010, a first in Canada’s history.

While interracial marriages were uncommon at the time, Desmond—one of 10 children—was born to a white mother and a black father in 1914 who were active members of various black community organizations. Growing up, she noted the void of professional hair and skin-care products for black women. 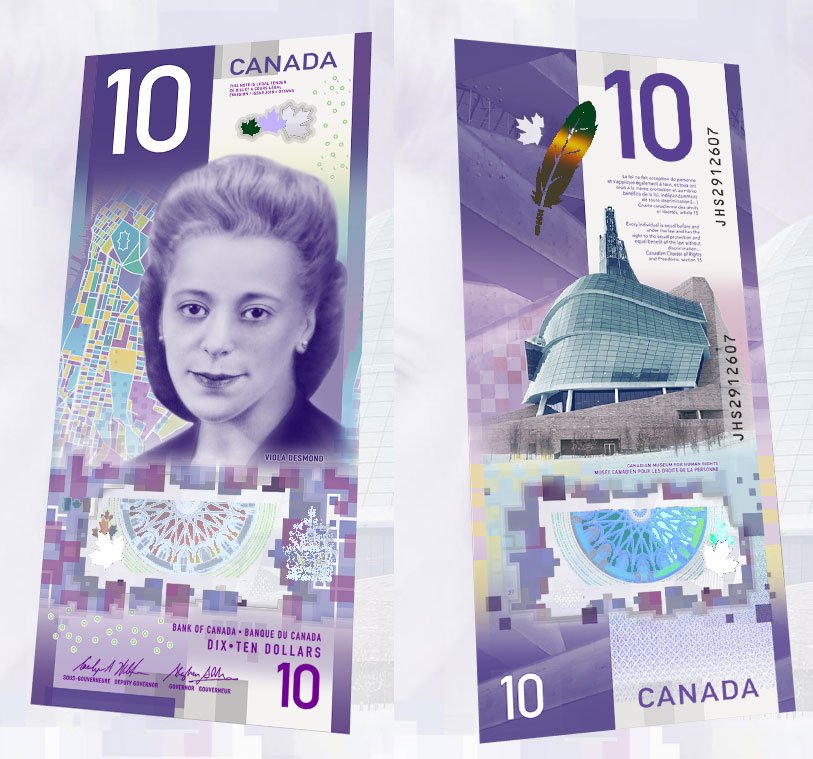 Bank of Canada introduces a new *vertical* $10 bill; featuring Viola Desmond, a Halifax businesswoman who was jailed, convicted, and fined for refusing to leave a whites-only area of a movie theatre in 1946.

Desmond built a business career as a beautician and a mentor to young black women in Nova Scotia through her Desmond School of Beauty Culture, graduating as many as 15 women in a year. She started a program at the Field Beauty Culture School in Montreal, one of the few institutions in Canada that accepted black applicants. She later opened Vi’s Studio of Beauty Culture in Halifax catering to the black community.

Desmond’s story didn’t receive public attention until her sister, Wanda Robson, at the age of 73, enrolled in one of Graham Reynolds’ course on race relations at the then-Cape Breton University. With Reynold’s help, Robson was able to tell Desmond’s story with the publication of Sister to Courage in 2010.

Meanwhile, U.S. Treasury Secretary Steve Mnuchin said in January that his department hasn’t made up its mind whether to have Harriet Tubman on the $20 note.

Mnuchin’s assertions run contrary to the Obama administrations announcement in 2016 that the late abolitionist would become the first black woman to grace American paper currency and the first woman in more than 100 years. Featured Stories
This Is The Only Black Woman-Owned Hotel in Marrakech, Morocco Featured Stories
Finally! A Solid Definition of Afrofuturism and How It Relates to ‘Black Panther’ Featured Stories
Book Hairstylists, Barbers, and Makeup Artists with Taper App
MORE FROM OUR FRIENDS
powered by PubExchange
3/14/188:56 AM
❤️ 0
Original Post
Back To Top