Republicans Urge Minorities To Get Out and Vote on November 3

Above: A billboard erected by the Baltimore County Black Republicans for Maryland.

MIAMI, FL"”With the knowledge that the minority vote will be crucial in the upcoming presidential election, Republican Party officials are urging blacks, Hispanics, and other minorities to make their presence felt at the polls on Wednesday, Nov. 3.

"Minority voters should make their unique voices heard, especially the African-American voting bloc, which is always a major factor in every election," said Florida Republican Party voter-drive organizer Mark Monreal, as he handed out flyers at a community center in the mostly black Miami neighborhood of South Farms. "That's why we put up hundreds of brightly colored banners featuring Martin Luther King Jr. and the 'Vote November 3' reminder. We needed to make sure they know when we want them at polling places."

"You can't walk through a black neighborhood here in Miami without seeing our 'Don't Forget Big Wednesday!' message up on a billboard, tacked to a phone booth, or taped to a bus shelter," Monreal added. "The Republican Party has spared no expense in this endeavor."

GOP committees in Ohio, Iowa, Wisconsin, Minnesota, Pennsylvania, Oregon, and Florida have spent more than $3 million on pamphlets, posters, stickers, and T-shirts bearing such slogans as "Put America First"”Vote On The Third!" and "November 3rd Is Your Time To Be Heard."

Monreal's group is joined by hundreds of local organizations, such as the Black Republicans For Maryland. While the Black Republicans do not actually include any black members, the group describes itself as "dedicated to communicating a strong message to members of the African-American community."

"We're aiming not just to get black people to vote, but to mobilize them to come together for one specific day of minority empowerment," Baltimore County Black Republicans For Maryland president Mitchell Williams said. "As Republicans, we truly believe that, by coordinating the minority vote across the nation, we can put minorities in their proper place. We believe we know what's best for the whole country."

Republicans are eager to point out the differences between their drive and those of other get-out-the-vote organizations.

"Strange as it is to say it, we're non-partisan," Monreal said. "We don't care if the minority voter is part of the vast majority of non-whites that traditionally votes Democrat. What's important to us is that we get them to the polls bright and early on the third day of November, so that they feel like they've participated in this year's election."

Monreal said Republican volunteers will be available to drive minorities to polling places on Nov. 3.

"We'll even stay at home with them the day before, to help them prepare for the act of voting," Monreal said. "We'll engage in concentrated one-on-one tutoring the entire day, to make sure these voters focus on the important act of voting, rather than going outside, reading newspapers, or watching television."

Republican Party leaders expressed pride in what they characterized as a true alternative to other programs that encourage voting, such as Rock The Vote.

"Let's be honest," Republican National Committee chairman Ed Gillespie said. "The Bush camp has been criticized for ignoring the minority vote for some time, especially during the last election. This project is our way of correcting that misperception. The Bush camp is extremely concerned about the black vote, especially in places like Florida, Ohio, and Pennsylvania. This year, on Nov. 3, we'll make a concerted effort to welcome minority voters into our own special camps with open arms." 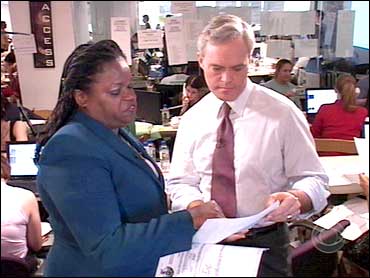 The calls ranged from complaints of fraud to confusion to dirty tricks, including fliers that some voters faxed to Arnwine for review.

"These are dirty tricks. Voters have been calling the hotline complaining of what they see are flyers that are trying to misinform the people," says Arnwine, who showed Pelley some of the fliers.

"The Milwaukee flier, which is allegedly from the Milwaukee Black Voters League - it's a fictitious organization."

Another flier says, "If anybody in your family has ever been found guilty of anything, you can't vote in the presidential election."

Arnwine says the flier, allegedly from a township in Allegainee County, Pa., is very deceptive. "This says, 'Voters will be able to vote on both Nov. 2nd and Nov. 3rd.'"

Where does this stuff come from?

"It comes from people who like to perpetuate dirty tricks, and who will do anything to prevent voters from voting on Election Day," says Arnwine.

Sign In To Reply
Post
Further proof that Asians are treated better than you Ni.....
1 hour ago