White Cops File Suit, Claim They Are Punished Too Much For Shooting Black People

AFRICANGLOBE – Less than a week after twelve-year-old Tamir Rice was fatally shot by Cleveland police officers who thought Rice’s toy gun was real, nine other members of the Cleveland Police Department filed a lawsuit that accuses the department of discriminating against non-Black officers who used deadly force.

In the suit, the plantiffs claim that the department treated White officers involved in the 2012 shooting of a Black couple “substantially harsher” than African American officers involved in the same incidents. The lawsuit deals with the aftermath of a deadly November 2012 car chase. During the car chase, 13 police officers fired over 130 shots at a Chevrolet Malibu. Both people in the car were shot over 20 times and killed. Neither had a weapon. During an investigation of the car chase, it came out that officers had omitted events in their statements, misidentified the suspects and did not specify that police officers had fired shots. Earlier in November, the city settled a lawsuit over the incident for $3 million.

The officers alleged that the department’s practices place “onerous burdens on White officers, including the plaintiffs, because of their race,” which violates their due process and equal protection under the law. The officers argue that as a result, they have lost wages and have suffered “impairment of their professional reputations, humiliation, emotional distress, mental anguish, and other serious damages.”

The officers’ share of the punishment was 3 days of administrative leave, followed by restricted duty for a period of time — typically 45 days — during which they say they were asked to do “menial and unpleasant tasks” and denied overtime pay. The nine officers were not allowed to return to active duty for 16 months due to media and political pressure, which hurt their ability to apply for promotions and denied them “a substantial amount of income,” the suit alleges.

The suit also argues that the nine officers should not have been disciplined individually because Ohio’s attorney general Mike DeWine attributed the incident to systemic failure within the entire department.

The lawsuit was filed as national police brutality protests erupt not just over a grand jury’s decision not to Ferguson officer indict Darren Wilson, but also by another fatal shooting in Cleveland’s own community. On November 23, a Cleveland police officer shot and killed Tamir Rice, a 12-year-old boy, believing that the toy gun he was carrying was real. According to Cleveland’s deputy police chief, Rice did not threaten the officers who killed him or point the toy gun in their direction. City officials said that police officers waited almost four minutes after Rice was shot to give him first aid.

There are actual White people that believe this and would support this.

"Hey, the cops are doing their jobs and the Blacks aren't interested in law and order. Stuff happens."

We gotta find a way to get in the system and change it to our favor.

That's because they have the mindset of a Slave Owner. Look closely, nothing has really changed since 1619, just the names and the dance steps, slightly. We're all Africans in America stepping to the same ole tune.

The police are addicted to IMPUNITY and RACISM! If we could hear what is said when cops spot a driving or walking while black violation, we would not be surprised at all. We innately know what they say and think just by their actions and focus on racial profiling blacks and manipulating blacks into a confrontations in order to manufacture a arrest.

Before a WHITE MAN  becomes a title, he's a WHITE MAN.  That little crazy white boy we see in the store, those crazy college white kids, those assholes on the Dumb Things Whitey does on TRU TV,(none of  them have a set of balls between them; they lost them being totally insane) once those bastards reach adulthood, they're on the path to ruling over Africans in America in some way, shape or form.

They'll be making gobs of money and be in all kinds of authority positions, all the while calling us the Niggers they have been calling us since they began to talk.

Chris Matthews sprouts "Minorities" out of his mouth so much, his damn lips have disappeared completely.  Minorities means Niggers and that's all it means. The Lesser Thans, the 3/5-ers. If we really studied these Caucasians, we'd be sick totally, until the day we died.  There's something WRONG with these "people".

The dog show the other night:  The dogs were more beautiful than anything that was running along side in Man-kind form, putting them on display. it's a shame when your best friend four legged animal looks way better than you, hair and all.

(CNN) -- Cleveland police officers use guns, Tasers, pepper spray and their fists either unnecessarily or in retaliation, while using excessive force on those "who are mentally ill or in crisis," the Justice Department announced Thursday.

As a result of this "pattern ... of unreasonable and unnecessary use of force," the city and Justice Department have signed an agreement "to develop a court-enforceable consent decree that will include a requirement for an independent monitor who will oversee and ensure necessary reforms."

The results of the federal review come as the Cleveland Division of Police is under fire for the November fatal shooting of 12-year-old Tamir Rice. The incident sparked outrage in an era when the Michael Brown shooting and similar situations have put police use of force under a microscope, though Chief Calvin Williams has defended the shooting, saying Rice reached for an air pistol that was "indistinguishable from a real firearm."

According to the investigation's findings, the department's practices erode public confidence in the police, making it difficult and dangerous for the city to deliver police service, the department said. 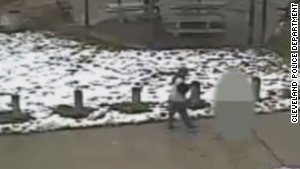 "Accountability and legitimacy are essential for communities to trust their police departments, and for there to be genuine collaboration between police and the citizens they serve," Attorney General Eric Holder said in a statement.

"Although the issues in Cleveland are complex, and the problems longstanding, we have seen in city after city where we have been engaged that meaningful change is possible. There are real, practical and concrete measures that can be taken to ensure not only that police services are delivered in a constitutional manner, but that promote public safety, officer safety, confidence and collaboration, transparency, and legitimacy."

The Justice Department said it launched its probe in March 2013 after "a number of high profile use of force incidents and requests from the community and local government to investigate the division." Mayor Frank Jackson requested the investigation after a controversial police chase and shooting that killed two people in December 2012.

Not only did the investigation reveal a practice of unreasonable use of force but "in some cases unnecessary force in violation of the Fourth Amendment of the Constitution."

That includes unnecessary shootings and "head strikes with impact weapons," the report says. It also includes "excessive force against persons who are mentally ill or in crisis, including in cases where the officers were called exclusively for a welfare check."

The investigation found that the department employs "poor and dangerous tactics that place officers in situations where avoidable force becomes inevitable."

The Justice Department concluded that Cleveland's officers are not provided "adequate training, policy guidance, support, and supervision. Additionally, systems of review that would identify problems and correct institutional weaknesses and provide individual accountability are seriously deficient."

The department fails to review its officers' use of force, investigate other allegations of misconduct, "respond to patterns of at-risk behavior," enforce appropriate policies and establish "effective community policing strategies," according to the Justice Department.

"Throughout the investigation, the Department of Justice provided its observations and concerns to the city, and in response, the division has begun to implement a number of remedial measures, however, much more work is needed," the department's statement said.

"Together, we can build confidence in the division that will ensure compliance with the Constitution, improve public safety and make the job of delivering police services safer and more effective," Gupta said in the statement.

Attorneys and investigators from the Justice Department's Civil Rights Division's Special Litigation Section and the U.S. Attorney's Office for the Northern District of Ohio reviewed thousands of pages of documents, including training materials, internal reports, video footage and investigative files. They also interviewed "officers, supervisors and command staff, and city officials; and spoke with hundreds of community members and local advocates."

Who checks the "cops" for their damn mental illness/racial insanity?????????

Who checks the "cops" for their damn mental illness/racial insanity?????????

+ no one...the feds need to do background checks and followup on these cops.  i guess this was another missed opportunity by the first Black AG

America's turning into some kind of inexplicable dangerous racial maze.  The thrill is gone!!!! I take that back; the thrill never was, although the music was great for me back in the day.

Sign In To Reply
Post
I Can't Breathe': Man Dies After Minneapolis Police Officer Seen Kneeling On His Neck
8 minutes ago

To the uprisers in Minneapolis that are ripping the city down to bring attention to police tyranny...let it burn RRSOTD
2 hours ago

Educated Black Women Think They Are Better Than Blue Collar Men.
15 hours ago

Corona Virus: The Truth
23 hours ago