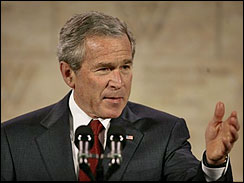 WASHINGTON, Dec. 14, 2005(CBS/AP) On the eve of landmark elections in Iraq, President Bush on Wednesday accepted responsibility for going to war despite intelligence that "turned out to be wrong."

But, he insisted, the decision to oust Saddam Hussein was still correct.

"It is true that much of the intelligence turned out to be wrong. As president I am responsible for the decision to go into Iraq," the president said in the fourth of a series of speeches defending his Iraq strategy. "And I'm also responsible for fixing what went wrong by reforming our intelligence capabilities. And we're doing just that."

The president called Thursday's parliamentary elections "a watershed moment in the story of freedom," reports CBS News White House correspondent Mark Knoller, though he conceded it won't stop the insurgents and terrorists.

"They know that as democracy takes root in Iraq their hateful ideology will suffer a devastating blow, so we can expect violence to continue," Mr. Bush told the Woodrow Wilson International Center for Scholars in Washington.

But with public opinion still running against his mission, Mr. Bush still was left defending his decision to go to war nearly three years ago.

"We are in Iraq today because our goal has always been more than the removal of brutal dictator," Mr. Bush said. "It is to leave a free and democratic Iraq in his place.

As he usually does, Mr. Bush asserted that the Iraq of the future, with a functioning democracy and thriving economy, would be a model for other nations in the turbulent Middle East. But he added a specific reference to the inspiration that a free Iraq could provide to reformers in the region's two governments most hostile to the United States "” Syria and Iran.

The president is banking on a successful election to signal that his war plan is working. If the voting establishes a successful government, it eventually could lead to the withdrawal of U.S. forces.

The president could use some more good news in Iraq. With the violence showing no sign of waning, most Americans are unhappy with his handling of the war and some lawmakers are questioning how long the troops should stay.

At a news conference before the president's speech Wednesday, Senate Minority Leader Harry Reid said: "Tomorrow's elections must signal a turning point in the relationship between America and Iraq." After the elections, he said: "Iraq must get its political house in order and get the security forces it needs to defend itself."

Mr. Bush has been pushing back aggressively against the negative image of his war mission with a series of four speeches in recent weeks. Thursday was the last in the series.

Answering critics who have said he had offered no clear definition of victory in Iraq, Mr. Bush offered a succinct summation.

"Victory will be achieved by meeting certain objectives: when the terrorists and Saddamists can no longer threaten Iraq's democracy, when the Iraqi security forces can protect their own people, and when Iraq is not a safe haven for terrorists to plot attacks against our country," he said. "These objectives, not timetables set by politicians in Washington, will drive our force levels in Iraq."

In the Senate, 40 Democrats and one independent signed a letter to Mr. Bush on Wednesday in which they urged him to be more frank with Iraqis and the American public.

The administration, the letter said, should "tell the leaders of all groups and political parties in Iraq that they need to make the compromises necessary to achieve the broad-based and sustainable political settlement that is essential for defeating the insurgency in Iraq within the schedule they set for themselves."

Mr. Bush, the letter said, also must present "a plan that identifies the remaining political, economic, and military benchmarks that must be met and a reasonable schedule to achieve them."

Mr. Bush got a better reaction from a group of House Democrats he hosted for a briefing on Iraq before the speech. They were complimentary of the president's strategy and his recent doses of candor about the situation there. The briefing was given by military commanders via videoconference from the field and top administration officials at the White House.

"There was a dose of reality that I have not heard before," Rep. Steve Israel, D-N.Y., told reporters outside the White House afterward. "Frankly I found it refreshing."
12/14/052:25 PM
❤️ 0
Original Post

Does he admit defective Bush intelligence?

Here was a man who, despite military help from the US, the former Soviet Union, Europe, and most Arab States, could not defeat the peasant army of Iran in eight years of fighting. In fact, just prior to the cease-fire of 1988 that ended the Persian Gulf War, Saddam Hussein was in danger of losing Basra to Iranian forces.

Now, keep in mind this was post-revolutionary Iran. Saddam was fighting a country whose military, especially it's officer corps, that had been decimated by the Ayatollah Khomeini. Also, keep in mind that Saddam had all of the latest conventional military hardware supplied by the US, et al., and had access to most Western intelligence information.

Iran, on the other hand, literally sent men to fight with stick and stones. This was because Iran's Army and Air Force were the remnants of what the US had supplied the Shah before Khomeini gave him his walking-papers.

And because the Shah was our guy in Tehran (mass-murderer, corporate ally, etc., etc.), the State Department took a dim view of these happenings. The US refused to supply new or spare parts to Iran's American equipped Army and Air Force, leaving both practically non-functional - not exactly in top fighting form.

So, despite all of these military and logistical advantages, Saddam in eight years of fighting, could not win the Persian Gulf War against Iran.

IsomeA1
He's still lying! It wasn't faulty intelligence... it was manipulated intelligence. And, he is responsible for the manipulating.
12/15/0511:33 AM
❤️ 0
Pace TuaA4

Yes, he's still lying. It was manipulated intelligence with the intention of doing exactly what he did.

And I love this gibberish and double-speak:

"Faulty intelligence was responsible for everything that went wrong in Iraq, not me. But as president I am responsible, but I'm not really responsible and I certainly don't want to do anything to correct my mistake. Which wasn't really a mistake because my decision to remove Saddam Hussein was the right decision."

EbonyRoseA1
My question is, who is this "admission" supposed to be important to??

Who didn't know that he and his intelligence were/are faulty?? I mean, this is no news flash here for most of us!

Is his taking this "responsibility" supposed to put him in some new light??

Will all the flag-waving, patriotic, I-love-Bush's-dirty-draws-even-if-he-is-the-stupidest-man-whoever-sat-in-the-Oval-office , loyal supporters now suddenly have some kind of awakening and ... what??

12/15/0511:31 PM
❤️ 0
Empty PurnataA1
Until Bush sets a withdrawl date and apologizes for sending men and women to die in a war over Big Oil, he can shove his admittal up his a*s.

The fact that he says he'd still do it all over again means he is not sorry at all.

quote:
Originally posted by Kevin41:
bush is like the unalikes in here....they only say obvious things and then act as if a big revelation occurred...........

Neo-Cons and their Neo-Coons are known for pulling a Captain Obvious when they reveal that their bullshit is unsubstantiated.
12/16/055:59 AM
❤️ 0

quote:
Originally posted by Pace Tua:
"And I've done a lot to fix our intelligence capability by appointing a known terrorist, John Negroponte, to a cabinet leval post."

Al-Jazeera said the video, which is about a minute long, was made in December.

According to CNN's translation of the video, Ayman al-Zawahiri offers his condolences to Pakistan for the October 8 earthquake before congratulating fellow Muslims for what he says is a victory in Iraq.

He refers to a November 30 speech in which Bush reiterated the U.S. position that its military would leave Iraq once Iraqi forces were fully trained, without laying out a timetable.

The video, which had been edited, shows the gray-bearded al-Zawahiri seated, wearing glasses, a white headdress, a white sash, a gray shirt and a clip-on microphone.

As he speaks, he is constantly pointing at the camera with his right hand, but his voice remains calm. Behind him is a gun propped up on a brown wall.

The video has English subtitles and shows the logo of the production company, As-Sahab, which has produced previous al Qaeda videos as well as videos from the 9/11 bombers.

Here is the full translation of the video as it aired on Al-Jazeera:

"Even though I send my condolences to my Islamic nation for the tragedy of the earthquake in Pakistan, today I congratulate everyone for the victory in Iraq. You remember, my dear Muslim brethren, what I told you more than a year ago, that the U.S. troops will pull out of Iraq. It was only a matter of time.

"Here they are now and in the blessing of God begging to pull out, seeking negotiations with the mujahedeen. And here is Bush who was forced to announce at the end of last November that he will be pulling his troops out of Iraq.

"He uses the pretext that the Iraqi forces reached a high level of preparedness. But he doesn't have a timetable for the pullout.

"If all of his troops -- air force, army -- are begging for a way to get out of Iraq, will the liars, traitors and infidels succeed in what the world superpower failed to achieve in Iraq?

"You have set the timetable for the withdrawal a long time ago and Bush, you have to admit that you were defeated in Iraq, you are being defeated in Afghanistan, and you will be defeated in Palestine, God willing."

Al-Zawahiri, an Egyptian doctor with a $25 million reward on his head, released five audio and video statements last year, including several claiming responsibility for the July attacks on London's transit system.

In mid-October, U.S. officials released a letter they said was written by al-Zawahiri to the leader of al Qaeda in Iraq, Abu Musab al-Zarqawi, in July about seeking support for Iraqi insurgents ahead of a U.S. withdrawal.

Days later, al Qaeda in Iraq posted an Internet statement calling the letter "another fabrication ... by the Black House," using its term for the White House.

Osama bin Laden has not been seen on videotape since October 2004.

It's the culture...RRSOTD
2 days ago

Harris on Buffalo shooting: 'We are seeing an epidemic of hate'
2 days ago