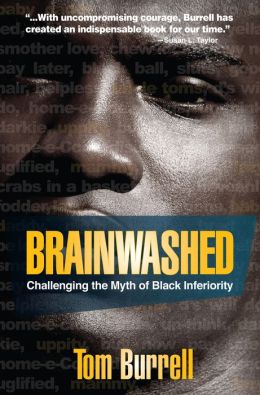 "Black people are not dark-skinned white people," says advertising visionary Tom Burrell. In fact, they are much more. They are survivors of the Middle Passage and centuries of humiliation and deprivation, who have excelled against the odds, constantly making a way out of "No way!" At this pivotal point in history, the idea of black inferiority should have had a "Going-Out-of-Business Sale." After all, Barack Obama has reached America's Promise Land.

Yet, as Brainwashed: Challenging the Myth of Black Inferiority testifies, too many in black America are still wandering in the wilderness. In this powerful examination of "the greatest propaganda campaign of all time"-the masterful marketing of black inferiority, aka the BI Complex-Burrell poses ten disturbing questions that will make black people look in the mirror and ask why, nearly 150 years after the Emancipation Proclamation, so many blacks still think and act like slaves. Burrell's acute awareness of the power of words and images to shift, shape, and change the collective consciousness has led him to connect the contemporary and historical dots that have brought us to this crossroads.

Brainwashed is not a reprimand-it is a call to action. It demands that we question our self-defeating attitudes and behaviors. Racism is not the issue; how we respond to media distortions and programmed self-hatred is the issue. It's time to reverse the BI campaign with a globally based initiative that harnesses the power of new media and the wisdom of intergenerational coalitions. Provocative and powerful, Brainwashed dares to expose the wounds so that we, at last, can heal.

I totally agree with this article! Black people by way of the Atlantic Slave Trade currently are STILL being brainwashed. And to take it a little further, I think the THREE main religions that participate in the slave trade are the culprits. They had to had this in written form to prove to the world that blacks or those of lesser class of non black people were ordained slaves, property. In fact even in the Hebrew Bible it refers to marriage in this way. "Betrothal (erusin), which refers to the time that this binding contract is made, is distinct from marriage itself (nissu'in), with the time between these events varying substantially.[228][229] In biblical times, a wife was regarded as chattel, belonging to her husband;[228][229] the descriptions of the Bible suggest that she would be expected to perform tasks such as spinning, sewing, weaving, manufacture of clothing, fetching of water, baking of bread, and animal husbandry[230]." Sounds like SLAVERY to me and not a mutual partnership between two people and yet it's socially accepted completely cuz it is written in a so called sacred religious book

....pardon me while I puke and gag while I see evidence of women traditionally thrown under the bus. And...brainwashing keeps us UNDER it.

We brainwash ourselves cuz we want soooooo badly to be accepted by a society that refused to give us our basic rights. And we have basic rights now. But the techniques to keep us internally inferior continue to fire our ability to do ABSOLUTELY nothing while watching the extraordinary accomplishments done when the inferiority complex is removed and eradicated. The reason? We have grown accustom of being an intrigue part of the brainwashing process as why we do it to ourselves. And is why we buy into the slave masters accountability and interpretation for OUR LIVES. And we know better and yet we still do it. Proof? We sabotage each other by hating on each other constantly. We don't show our pride in where we are anymore. Here's one example. Look at our neighborhoods. Yes there is poverty...but! It doesn't take MONEY to get a broom weekly and sweep your own street. It only takes one street to start but do we do it? Hellll nawl. Instead? We complain.

Another example is how we have STOP inspiring, supporting, believing and protecting our OWN abilities as a culture. We look to others to praise us. We look to them while they are looking at us. What happened? My spin is that It is much easier to fall into the ARMS of massa's thousands year brainwashing than to do the WORK to remove it and eradicate it FOREVER. Why?

Too much work. Not physical work [we are used to doing for thousands of years] but emotional, psychological, cognitive work. We don't wanna do that. Nawl. Nor do we think about our future offsprings like other cultures do. We're not setting the stage for them. We live in the now. And guess what? The NOW? Is killing us.

But we refuse to recognize that is the CANCER of denial that is preventing us from moving forward.

I see the brainwashing in other ways. The black zombies-looking like robots walking around in their neighborhoods with a stance that if you-their own people stare at them in what they consider a wrong glance, they will shoot you. And many have shot each other for that very reason. What the fock is wrong with this picture? Each generation has become brainwashed as well. So what does one do at this point when realizing what the real problem truly is in our culture? How can this brainwashing method be broken?

It's not million dollar questions. The answers lie within us all.

I said this cuz it's like it took the Africans from the Atlantic Slave Trade to muster up all the strength and energy to climb up this mountain of freedom on the western hemisphere by way of blood, sweat and many deaths due to just straight determination and will power despite the brainwashing techniques used to keep them locked in inferiority ...but! Once they got almost to the top and look to the next generation to complete the trek....well you know the story.

Every Black person on this planet needs to read this book, while he speaks from a perspective of the African American experience, the same psychology, propaganda tactics and media assassination was, and still IS being used equally against Africans and all other people throughout the entire Black Diaspora.