A now-viral video posted on Facebook depicting the arrests of two Black women after they came face to face with a man allegedly assaulting a young boy has sparked an internal police investigation.

In the video, posted by relative Porsha Craver Wednesday, Dec. 21, a Forth Worth, Texas, parent identified as Jacqueline Craig had called police after a white neighbor reportedly attacked her son for littering.

“My daughter and son came home, saying that this man grabbed him and choked him,” Craig says to the cop as her daughter records. “I came around here and asked him. I said, ‘Why did you put your hands on my son?’ He said, ‘Oh, he threw some paper and I told him to pick it up.’ He said he defied him and that’s why he did it. You don’t have the right to choke somebody’s son. My son is 7 years old, you don’t have the right to grab him and choke him.”

The unnamed officer responded, “Why not?” The officer also insinuated that Craig did not teach her son proper manners. As to be expected, the officer’s response angered Craig, who began yelling at the officer. The officer then said, “If you keep yelling at me, you’re going to piss me off and I’m going to take you to jail.”

A young woman identified as Brea Hymond then approached her mother seemingly to calm her down, but the officer then comes toward both woman unprovoked. At this point, another woman entered the frame and attempted to diffuse the situation, but it only escalated. Craig ended up on the ground with a taser in her back while another daughter continued to live stream.

The officer also arrested Hymond and by the 2:30 mark, both woman are escorted to the back of a squad car.

Near the end of the video, Craver turned and addressed the camera:

The women’s attorney, Lee Merritt, met his clients around 3 a.m. at the Fort Worth jail, according to The Root.

In the video posted early Thursday, Merritt said that the Forth Worth Police Department has launched an internal investigation into the “unusual arrest.”

He added that both women are in good spirits and he is working on their release. 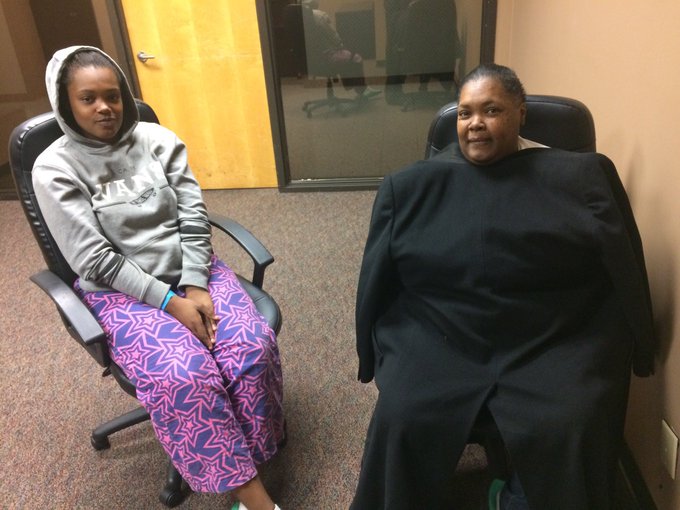 Still working hard to secure release of Jacqueline Craig & Brea Hymond. They are in good spirits & appreciate all the support. @ShaunKing

Merritt also revealed that the two were charged with resisting arrest, interference with an investigation and failure to ID.

He's not gonna lose his job if that what's she thinks.  They have done worst and still kept or regain their employment.  This is like the 50s,  when people taunt other folks' kids.  And when she said people don't do that....?  The officer said why not?  I knew then what atmosphere they are attempting to revisit.  The best way to eradicate it is to continue to expose it.  If parents can't touch their own children without child's services breathing down their backs...what makes a stranger think he can put his hands on a child without consequences?  So after she gets out I would definitely sue the guy  for assaulting my child and sue the police officer for wrongful arrest and interference.  Plus I would take it the state's attorney and have them sue him for child abuse/assault as well.  But!

I read this a few minutes ago. Smoke keeps coming out of my head. Damn subhuman scum!

a simple solution to a stranger touching your child...

a simple solution to a stranger touching your child...

Somebody needs to go old-school on his big, grown, faggot, racist ass.

But, then again, I wouldn't have been the one to confront the racist faggot, if he'd put his hand on my child, but, he would have been confronted; yeah, to see if he thought he could choke a grown ass man.

She needs to tell everyone in the neighborhood what that grown ass freak did, and I mean EVERYBODY.

But, he's going to 'f' with the wrong person's child, and that will be the end of his cowardly, faggot ass sh!t.

[People who abuse children disgust the hell out of me]

Corona Virus: The Truth
4 hours ago

U.S. PPE SUPPLIES SENT TO CHINA BY TRUMP [AFTER] HE WAS TOLD ABOUT CORONA VIRUS
9 hours ago