YemayaA1
The Nation poses the question, Is this the Birth of a Nation? 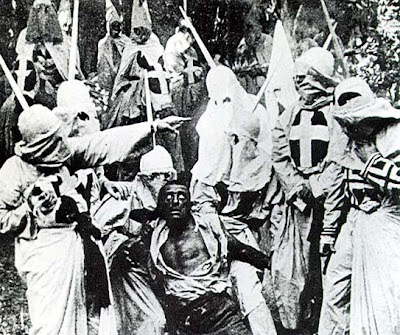 Democratic leadership responded by marching to the Capitol in a scene that looked more like a 1960s demonstration than a morning commute for the majority party.

The attacks on black and gay members of Congress immediately mobilized lefty mainstream media. On Monday night both Keith Olbermann and Rachel Maddow drew parallels between the health care battle and the civil rights movement. I like, respect, and appear frequently on both programs, but I think both have missed the mark in their racial analysis.

Crafting a metaphor that connects the civil rights movement and the bigoted language of this weekend's protesters is seductive. It seems so obvious given that Representative John Lewis plays a critical role in both. A young Lewis was severely beaten 45 years ago when he tried to lead a group of brave citizens across the Edmund Pettus bridge in an effort to secure voting rights for black Americans.

This weekend he graciously rebuffed his detractors in a perfect example of nonviolent, direct resistance. Representative Lewis said he harbored no ill will against those who called him names and insisted that we are all citizens of this nation and that we must learn to live peacefully and respectfully together. It was the kind of response that makes Lewis a hero to many.

But there is a very important difference between Bloody Sunday of 1965 and Health Care Reform Sunday of 2010. In 1965 Lewis was a disenfranchised protester fighting to be recognized as a full citizen. When he was beaten by the police, he was being attacked by the state. In 2010 Lewis is a long time, elected representative. When he is attacked by protesters, he is himself an agent of the state. This difference is critically important; not because it changes the fact that racism is present in both moments, but because it radically alters the way we should understand the meaning of power, protest and race.

To the extent that a state is challenged as the sole, legitimate owner of the tools of violence, force, and coercion, it is challenged at its core. This is why "state's rights" led to secession and Civil War. The legitimacy of the central state was challenged, then reestablished. It is also why the Civil Rights Movement was so powerful. The overt abuse of state power evidenced by the violence of Southern police called into question their foundational legitimacy. The federal government had to act or risk losing its authority as a state altogether.

The Tea Party is a challenge to the legitimacy of the U.S. state. When Tea Party participants charge the current administration with various forms of totalitarianism, they are arguing that this government has no right to levy taxes or make policy. Many GOP elected officials offered nearly secessionist rhetoric from the floor of Congress this weekend. They joined as co-conspirators with the Tea Party protesters by arguing that this government has no monopoly on legitimacy.

I appreciate the parallels to the civil rights movement drawn by the MSNBC crowd, but they are inadequate. When protesters spit on and scream at duly elected representatives of the United States government it is more than act of racism. It is an act of sedition.

John Lewis is no longer just a brave American fighting for the soul of his country- he is an elected official. He is an embodiment of the state.

Commentators and observers need to move their historical lens back a little further. The relevant comparison here is not the mid-20th century civil rights movement. The better analogy is the mid-19th century period of Reconstruction. From the end of the Civil War in 1865 until the unholy Hayes-Tilden compromise of 1877, black Americans enjoyed a brief experiment with full citizenship and political power sharing.

During this decade black men voted, held office and organized as laborers and farmers. It was a fragile political equality made possible only by the determined and powerful presence of the federal government. Then in 1877 the federal government abdicated its responsibilities to new black citizens and withdrew from the South. When it did so it allowed local governments and racial terrorist organizations like the KKK to have the monopoly on violence, force and coercion in the South for nearly 100 years.

As I watch the rising tide of racial anxiety and secessionist sentiment I am not so much reminded of the Bloody Sunday protests as I am reminded of D.W. Griffith's Birth of Nation. This 1915 film depicts the racist imagination currently at work in our nation as a black president first appoints a Latina Supreme Court Justice and then works with a woman Speaker of the House to pass sweeping national legislation. This bigotry assumes no such government could possibly be legitimate and therefore frames resistance against this government as a patriotic responsibility.

There are historic lessons to be learned. But they are the lessons of the 19th century not the 20th. We must now guard against the end of our new Reconstruction and the descent of a vicious new Jim Crow terrorism.

kresgeA1
Great article. My mind went to the same images. I actually was looking for footage of the KKK marching in Washington in its heyday and wanted to place it side by side with the Teabaggers.
3/23/1012:49 PM
❤️ 0

EbonyRoseA1
The only thing *new* is that they're out of their sheets!!

We need to begin to teach identity to ourselves, and then our children in the same manner we teach the identity of all others.

We are the ONLY ones who deny it.

YemayaA1
Speaking of seditionists and haters, from what I understand there is supposed to be a rally in Virginia on 16 April by Tea Partiers to carry weapons because that's the closest they can get to the White House and have a gun. I'm looking into this to verify this story. If it is true, I will certainly let y'all know with links.
3/25/103:56 PM
❤️ 0

You are the very first to utter those words on this site...other than me.

There is no mystery to sovereignty.

I have invited others to perform an experiment.

I now invite you.

Choose a person to whom you will say those words...face-to-face.

Ethnicity does not matter.

If you say them to a variety of persons, you will observe a very, very interesting series of responses.

NSpiritA1
To be honest JWC, i don't care for the double "american" part and I will never describe myself as an "african-american-american" to anyone else for as long as i live.  However i agree with much of your thoughts regarding self determination, identity as opposed to color, right to make choices that other groups freely exercise, etc.


The more I see the ethnic majority acting a fool because there is a black president the more i believe African-Americans need some type of political security beyond american citizenship.

James Wesley ChesterA1
To be honest JWC, i don't care for the double "american" part and I will never describe myself as an "african-american-american" to anyone else for as long as i live.  However i agree with much of your thoughts regarding self determination, identity as opposed to color, right to make choices that other groups freely exercise, etc.---NSpirit

I appreciate your honesty.

As simply a point of information, the first hyphen is not used.

Knowing is what is important.

Our knowledge defeats the ignorant behavior of others.

The more I see the ethnic majority acting a fool because there is a black president the more i believe African-Americans need some type of political security beyond american citizenship.---NSpirit

Whatever we 'claim' European Americans try to negate...undermine.

Our UNDENIABLE authority rests in determining our Identity.

AS LONG AS WE FAIL TO DO IT, EUROPEAN AMERICANS WILL 'DO IT FOR US'!!!

Native Americans have it.  Israelis have it in the midst of hostile territory.  Sovereignty seems to be a right goal to me.---NSpirit

And we can't seem to learn how to embrace that authority, and use to our advantage.

IT IS SO SIMPLE.

Just something that proactive and of self-benefit.