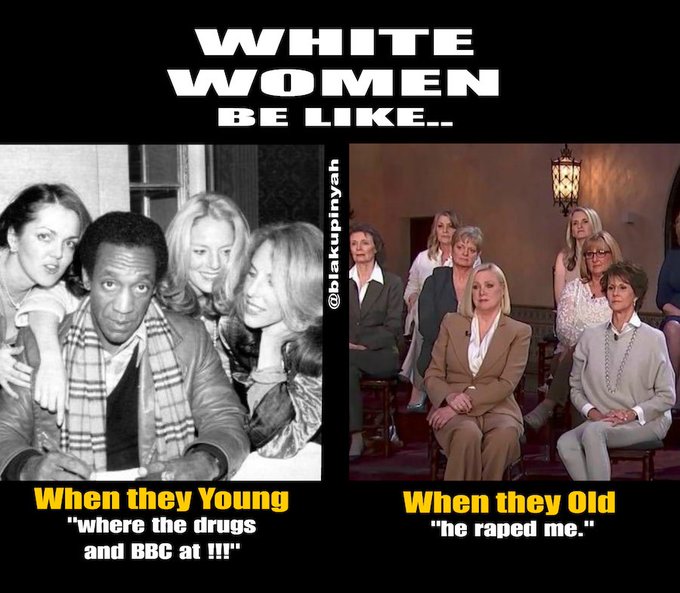 What kind of freak was the mannish, Lesbian, that walked Dr. Bill's way in the first damn place??

I'm with you all the way in this post RadioRaheem!! I don't believe Dr. Bill did anything with these Bags.

Happy Birthday Dr. Bill!! You're home to celebrate. Me too!!

I rememba those days when white girls were chasing BBC.  In the 70s it was all that free love flower child BS and white women were all in Black men's faces.  How soon we forget....eh?

Now they want that retirement money...is all.  Only cuz they can't do it like they used to when they were younger.  And they think they worked for it.  But!  Bill should have known....he was hanging with Hefner [who no white girl I know of ever sued him...not one].  But everything turned on Bill when he started putting Black folks down.  And Karma kicked his behind real good.  Now he knows he can't do that anymore.  What a lesson.  But!

Out of prison, Bill Cosby is already planning a comeback sure to court controversy

Bill Cosby is, in a word, "exuberant." And he wants to get back to performing — and more.

Cosby, 83, is with his family at the moment, Wyatt said, a week after his conviction on three counts of aggravated indecent assault against Andrea Constand was overturned. But plans are in the works to get "The Cosby Show" star back onstage in the U.S., Canada and London, Wyatt said.

Wyatt said Cosby's next act will weave the disgraced comic's "vintage storytelling" in with observations from his life today and will be "inclusive of human rights and civil rights" as Cosby works for criminal justice reform and prison reform based on his own experiences.

Cosby "gives you a formula without the preservatives," his rep said.

The performer was convicted in April 2018 of drugging and sexually assaulting Constand. He was sentenced to three to 10 years in prison, a term he was serving at a maximum security state facility in Pennsylvania. They were the only criminal charges brought against Cosby, who has been accused of sexual misconduct by dozens of women.

Cosby's team — including the legal staff — still has to work out the details about how audiences, promoters and "media insurrectionists ... who fuel the hate" will be screened, Wyatt said, but he's not very concerned about hecklers and the like. Plus, he said, "It's not happening tomorrow." They have time.

Also in the works, according to Wyatt: A book, written by Frederick Williams, will feature Cosby and Wyatt talking about the performer's experiences through both of his trials (the civil and the criminal) and while he was in prison. They also will discuss the strategies Cosby and his team used to get him through it all.

Additionally, production is almost done on a five-part docuseries about the nine-time Grammy winner, from "Venus and Serena" director Michelle Major, which will include the comic's recent experiences in the legal system. Cosby still has to sit for his interview.

In the meantime, his release from prison sent shockwaves across social media last week and landed Phylicia Rashad, his longtime friend and former "Cosby Show" costar, in hot water after she tweeted her support. (She later apologized.)

As for Cosby's conviction being overturned on a technicality by the Pennsylvania Supreme Court, which found that his right to due process had been violated, Wyatt said that the U.S. Constitution "[wasn't] given to us as a suggestion. It was a mandate."

Cosby was not found innocent by the state's high court. Rather, it found that he had a 2005 agreement with a prior prosecutor that shielded him from criminal prosecution in exchange for giving a deposition in Constand's civil trial. Cosby settled with the former Temple University employee for $3.4 million in that civil complaint.

The attorney who prosecuted Cosby criminally did so despite that agreement — which was never put into writing — violating Cosby's 5th Amendment right against self-incrimination.

“When a prosecutor makes an unconditional promise of non-prosecution, and when the defendant relies upon that guarantee to the detriment of his constitutional right not to testify, the principle of fundamental fairness that undergirds due process of law in our criminal justice system demands that the promise be enforced,” Justice David N. Wecht wrote in the court’s majority opinion.

Sixty women have accused Cosby of sexual misconduct dating as far back as the early 1970s, when he was in his 30s.

"I have never changed my stance nor my story. I have always maintained my innocence," Cosby said in a statement tweeted June 30, the day of his release. "Thank you to all my fans, supporters and friends who stood by me through this ordeal. Special thanks to the Pennsylvania Supreme Court for upholding the rule of law."

In a statement last week, Montgomery County (Pa.) Dist. Atty. Kevin Steele said Cosby went free “on a procedural issue that is irrelevant to the facts of the crime.”

“My hope is that this decision will not dampen the reporting of sexual assaults by victims. We still believe that no one is above the law — including those who are rich, famous and powerful,” he said.

I think he need to chill for a minute.  Take a breath.  Cuz these women are relentless and they are not gonna stop...until they get that mola.  Bill's mistake was when he turned on Black folks....and after that?  Karma started whuppin that butt.  So.  He needs to sit and ponder his next move.  Cuz he's no young tender.

And they got the taste of blood on their tongues.  But!

Happy 84th Dr. Bill!! It's mine too, but I'm not willing to divulge yet. I'm no Spring Chicken, that's for sure!! Time crept up on my black butt. It happens to us all!!